Silvertoni Makes It 2-for-2 In KY Juvenile 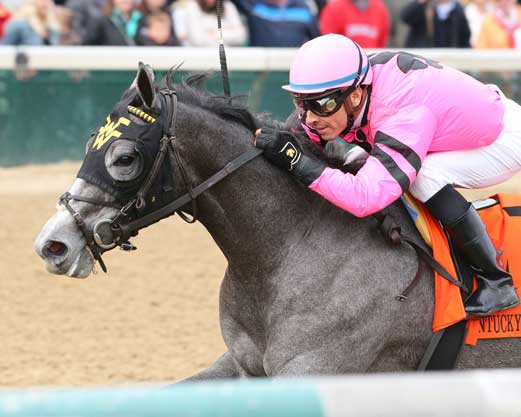 Silvertoni was clear-cut winner of her Keeneland debut Apr. 14 when made the 7-10 choice and was one of three Wesley Ward runners–all fillies–entered in this before ‘TDN Rising Star’ Lady Aurelia (Scat Daddy) was scratched. Breaking on top, the gray made a clear lead in the opening furlong and took the field through a quarter in :22.51. Her stablemate and ‘Rising Star’ Con Te Partito (Scat Daddy) inched closer on the latter half of the turn and well-backed Hey Mike made it three in a line at the top of the lane. Silvertoni was briefly headed by Hey Mike in midstretch, but responded gamely in the final furlong under Jose Valdivia, Jr. to shake that foe off and pull away to win by daylight, Thirstforlife, made 5-2 as the lone firster in the group and representing the same connections as Belmont ‘Rising Star’-earning Tale of Two (Tale of the Cat), completely missed the break from his rail draw, but came flying in the stretch to just miss grabbing second from Hey Mike.

“She’s a nice filly and is bred to be nice and we are real excited,” said Ward, who confirmed suspicions that Silvertoni would be Royal Ascot-bound. “She’s very talented. I think that she’s going to only get better as she goes further. Going into the race, [Con Te Partiro] would probably be a little quicker going out of the gate, but she broke a step slow so this filly kind of took advantage of that, and [Con Te Partiro] came outside of her, but the other filly just has a big strong lengthy stride and it’s just tough to get by her because she just keeps running.”

The winner’s dam was second in the 2011 G3 Balanchine S. at The Curragh, and was third sprinting on the Penn National turf as a sophomore. Hailing from an extremely deep Phipps Stables family that includes Grade I winners Easy Goer, Easy Now, Relaxing and Cadillacing, she produced a Tiznow colt last term.