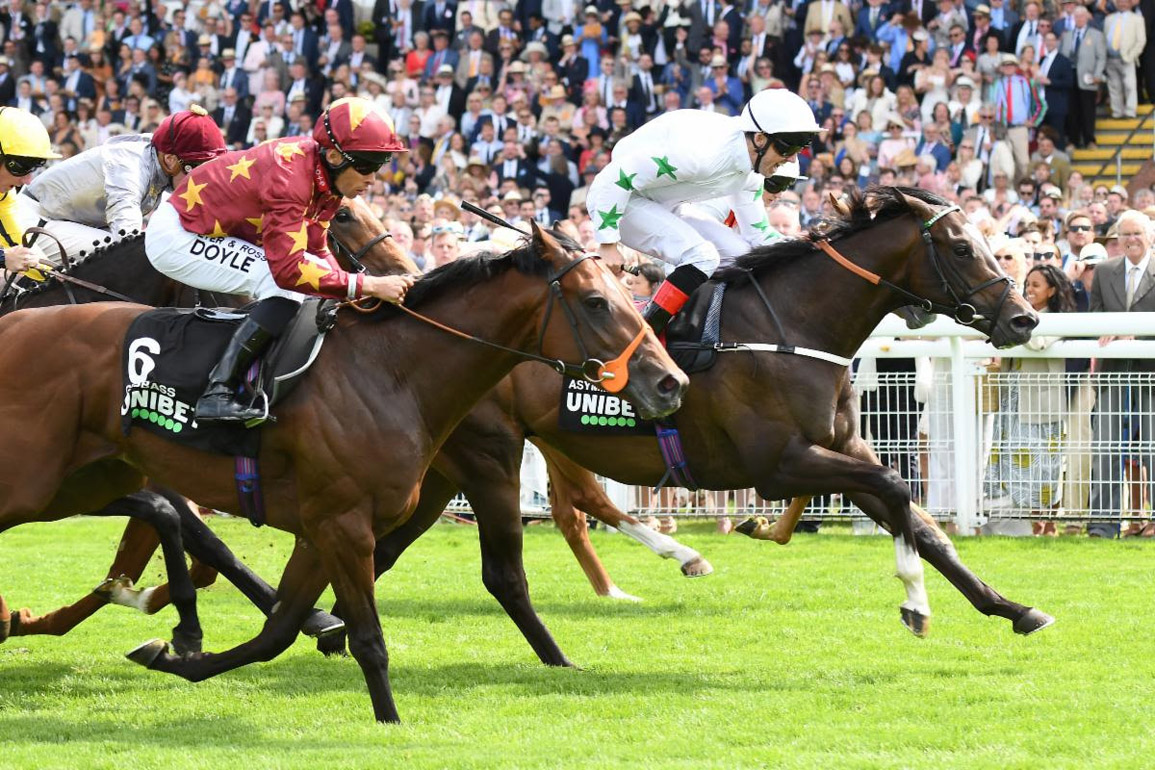 Fresh from a landmark success in Tuesday's G1 Goodwood Cup, the Alan King stable was to the fore once more when Leora Judah's 2-year-old colt Asymmetric (Ire) (Showcasing {GB}) displayed an explosive turn of foot to bag Thursday's G2 Unibet Richmond S. at the Sussex track. The March-foaled bay had opened up with a pair of novice scores, over this six-furlong strip and at Newmarket in June, before relinquishing his perfect record when the wrong side of a head verdict in the latter venue's July 8 G2 July S. last time. Asymmetric was sharply into stride from the stands' side stall, but was shuffled back to settle fifth after the initial exchanges. Rowed along in behind inside the quarter-mile marker, the 11-4 favourite bullied his way through an opening passing the furlong pole and quickened impressively from there to prevail by a half-length from Khunan (GB) (Twilight Son {GB}) in a blanket finish. Newbury's Super Sprint winner Gubbass (Ire) (Mehmas {Ire}) was edged out of second by a nose with G2 July S. fourth Ebro River (Ire) (Galileo Gold {GB}) finishing a neck further adrift in fourth.

“I burnt out most of the nerves on Tuesday with Trueshan and hoped and thought Asymmetric would run very well today,” said trainer Alan King. “I wasn't thinking he had to win this whereas I thought Trueshan had to on Tuesday. Asymmetric has the most wonderful temperament, he's almost horizontal he's so laid back. We were always going to step back and take a lead on him and I was just hoping they wouldn't get first run on him. They went steady early, which was something I wasn't sure about, he has a fairly good turn of foot when he does go and he picked up very well. He can go on soft, but we think he is a better horse on top of the ground and he gives Martin [Harley] a much better feel on faster ground. Luckily, the ground has dried out a bit. He's in the [G2] Gimcrack and he's entered in the [G1] Prix Morny in France, but I've no idea where he goes next. We'll see what the team want to do.”

Winning rider martin Harley added, “He travelled good and when I asked him for a gear change, he went from second to fifth. He has an incredible turn of foot and he showed that today. That was very exciting.”

Looking ahead to possible targets for the runner-up Khunan, trainer Richard Fahey said, “I think Khunan is a six-furlong horse so we will be looking at the [G1] Prix Morny and he is in the [G2] Gimcrack.” Jockey Hollie Doyle added, “We had an easy time of it on the front end, but he hit a flat spot and then he quickened up really well. It was a massive run.”