Home » Archive » Europe » Showcasing On Top As Goffs Warms Up

Showcasing On Top As Goffs Warms Up 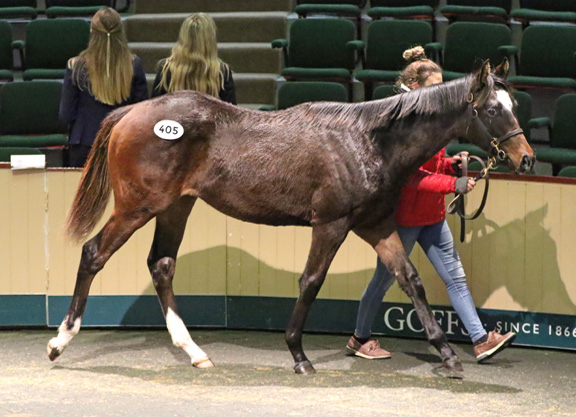 The son of Showcasing who topped Tuesday's trade | Peter Mooney

KILDARE, Ireland—Whitsbury Manor Stud's Showcasing (GB) can do little wrong at present and duly provided the top lot during the second session of the Goffs November Foal Sale.

Purchaser Brendan Holland, who will add the Showcasing colt to his yearling sales draft for next year, said, “Everyone wants a Showcasing and it's good to have a young up-and-coming sire like him. This is a grand colt and the sire has his best crop still to race for him next year, so let's hope that he continues to do what he's doing.”

We can expect today's final day of Part 1 foals to lift proceedings further still. The action will then switch to fillies and broodmares for two sessions before returning to Part 2 of the foal sale on Saturday.

McDowall Reinvests
Sir Robert Ogden has enjoyed recent success on the racecourse with juvenile filly Blue Gardenia (Ire) (Mastercraftsman {Ire}), winner of the Listed Montrose Fillies' S. at Newmarket earlier this month. The David O'Meara-trained filly is a daughter of the Galileo (Ire) mare Alegra (GB) and it was another of the owner-breeder's Galileo mares, the dual winner Tiger Lilly (Ire), who had the chance to shine on Tuesday, albeit in the sales ring. Her second foal by Zoffany (Ire), sold as lot 339 through Churchtown House Stud, brought the hammer down at €115,000 in favour of pinhooker Morna McDowall.

Tiger Lilly, whose first foal is a Charm Spirit (Ire) yearling filly, is a sister to the stakes-placed winners Robin Hood (Ire) and Shada (Ire) and a granddaughter of the accomplished Kilfrush Stud matriarch Arctique Royale (GB) (Royal And Regal)

The first to breach the six-figure barrier during the second session was lot 282, a first-crop son of Tara Stud's dual Group 2-winning juvenile Estidhkaar (Ire). The buyer at €100,000 was Ballyphilip Stud's Paul McCartan, who has had significant success with Estidhkaar's sire Dark Angel (Ire) as the breeder of his top-rated sons Harry Angel (Ire) and Battaash (Ire).

Bred by Ennistown Stud and consigned by Castlebridge, the colt is out of the unraced Anabaa mare Out Of Time (Ire) who has produced four winners from her six foals, including the G3 Leopardstown Guineas Trial runner-up What Style (Ire) (Teofilo {Ire}). His extended family also includes the stallions Sholokhov (Ire), Soldier Of Fortune (Ire) and Intense Focus, as well as recent Cartier Award winner Skitter Scatter.

Never Again
No Nay Never led the first day of trade and unsurprisingly he was responsible for several weanlings near the top of the table on day two. Camas Park Stud stepped in for a Heather Fitzpatrick-bred colt (lot 417) out of the multiple-winning Pivotal (GB) mare Court Circular (GB) at €100,000. Bred by Cheveley Park Stud, the mare is from a family that includes one of Pivotal's best race-fillies, the dual Group 1 winner Peeress (GB).

A little later, Brittas House Stud struck lucky with a first foal of the unraced Galileo mare Hot Legs (Ire) who was bought for €90,000. Bred by Michelle Collins, the colt was the selection of American agent Kim Valerio and will be exported to the US.

On the back of a season which has seen him crowned champion freshman sire in Europe, with Group 1 winner Ten Sovereigns (Ire) to his credit, No Nay Never is set to have his fee quadrupled in 2019 to €100,000.

Awtaad Support Grows
Among the new stallions with first foals on offer this winter, a name who appears to be on many pinhookers' lists as the Goffs sale continues is Derrinstown Stud's Irish 2000 Guineas winner Awtaad (Ire). The son of the late Cape Cross (Ire) has 30 foals catalogued this week and the 10 to have sold so far have returned an average of €48,300 from his starting stud fee of €15,000.

Eddie and Wendy O'Leary of Lynn Lodge Stud were among those to have supported him both at stud and in the ring, and they added a colt from the Irish National Stud (lot 508) to their list of purchases at €95,000.

“He was the standout by the sire in the sale,” said Wendy O'Leary, “and we're very happy with what we've seen as we have a couple of mares in foal to him.”

The colt is the first foal of the 5-year-old Kitten's Joy mare Love Street, a winner in France for Jean-Claude Rouget before being bought by the Irish National Stud for 70,000gns last December when carrying to Awtaad.

Jamie Railton is another new member of the Awtaad fan club and several lots earlier he had gone to €85,000 for a colt out of the listed winner Kanes Pass (Ire) (Clodovil {Ire}). Lot 488, who was bred by Elizabeth Cosgrove and consigned by Rathasker Stud, was described by Railton as a “stylish individual” who will be coming back to the yearling sales.

He added, “These are early days and we are all trying to get a handle on these new stallions but Awtaad is one that's caught my eye.”

Kodiac Never Far Away
Kodiac (GB) is represented by a growing number of sons at stud—among them Prince Of Lir (Ire), Coulsty (Ire) and Kodi Bear (Ire) all have first foals for sale this week—but their father is never far away when it comes to leading returns at the foal sales and lot 312 brought a handsome return for breeder John Fielding. The Kodiac (GB) filly was sold through Donnellys Well to Gaelic Bloodstock for €82,000 just hours before her 2-year-old half-brother Water's Edge (Ire) (Footstepsinthesand {GB}) made his debut at Lingfield for James Tate and Saeed Manana.

Two lots later another filly, this one a daughter of top-class sprinter Starspangledbanner (Aus) (lot 314) was knocked down for €80,000 to Frank Fahy's Gerrardstown House Stud. The first foal of the unraced Sparkling (Ire) (Dark Angel {Ire}), a sister to listed Marygate S. winner Delizia (Ire), was bred by Fiona Doggett and offered on her behalf by Ballinahow Stud.

There was confusion surrounding the sale of a Camelot (GB) filly late out of seven-time winner Miss Macnamara (Ire) (Dylan Thomas {Ire}) in the session for €120,000. Lot 532 was initially knocked down to Noel Hayes, was then marked as a vendor buyback before being reassigned to Hayes's Sunday Racing.