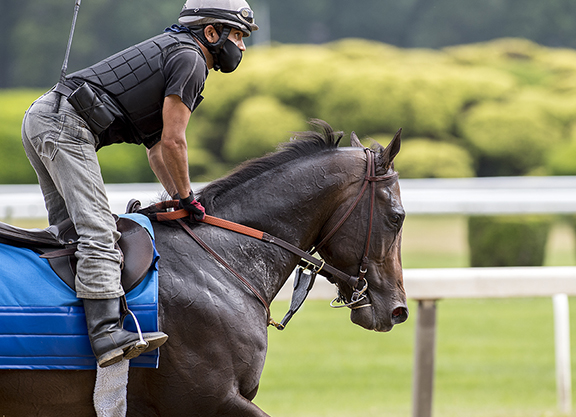 The streaking Mischevious Alex (Into Mischief) will look for his fourth straight score, third at the graded level, versus four fellow sophomores in Saturday's GI Woody Stephens S. at Belmont Park.

A jaw-dropping seven-length winner of Gulfstream's GIII Swale S. at this same seven-furlong distance, the speedy bay outslugged 10 rivals for a sharp decision in the GIII Gotham S. going a one-turn mile last time at the Big A Mar. 7.

“I'd love to be running in the Belmont,” trainer John Servis said. “But I wanted to run him shorter first back off the layoff and then stretch him out after that. The Woody Stephens seemed like a good spot.”

Mischevious Alex, campaigned in partnership by Cash is King and LC Racing, fired a five-furlong bullet in :59 4/5 (1/70) at Parx June 9.

“He's training very good coming into the race,” Servis said. “We had some time between races with the coronavirus and I eased off on him a little bit because we didn't have a schedule.”

Echo Town was a painful second when a head short of Long Weekend (Majesticperfection) in the Bachelor S. at Oaklawn Apr. 25, then refused to lose after dueling throughout in an optional claimer at Churchill Downs May 25. The 9-5 morning-line favorite makes his first start beyond six furlongs here.

If you forgive No Parole's eighth-place finish when stretched to 1 1/16 miles in a sloppy renewal of the GII Rebel S., the Louisiana-bred has been ultra-impressive in his four other trips to the post, including a front-running optional claiming tally going six furlongs in Hot Springs last time Apr. 24.