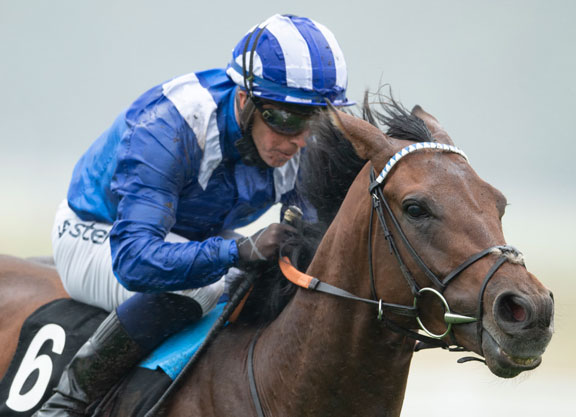 Shadwell's Hukum (Ire) (Sea The Stars {Ire}), the winner of three Group 3s over middle distances last season, is being set toward the G1 Dubai Sheema Classic at Meydan on Mar. 26.

The 5-year-old won Goodwood's Listed Tapster S. in May before finishing third in the G2 Hardwicke S. at Royal Ascot. After that Hukum put together back-to-back scores in the G3 Silver Cup S. and G3 Geoffrey Freer S., and was second in Kempton's G3 September S. before closing out his campaign with a 6 1/2-length win in the G3 Cumberland Lodge S. at Ascot on Oct. 2.

“The plan is to take him out to Dubai for the Sheema Classic and we are considering taking him out for Super Saturday as well,” said trainer Owen Burrows. “We might have a run on Mar. 5 and he'll possibly stay then for the three weeks before–nothing is finalised, but the Sheema is definitely on the cards. He's doing some good work now and we're very happy with him. He's in a good spot and Jim [Crowley] rang me to say he's going to come to have a sit on him one day next week.”

“By the end [of last season] he'd won three Group 3s and a listed race,” Burrows added. “Hopefully he can improve a little bit more as he finished the year on 116. He might need to find a few pounds, but I don't think it's beyond him.”

Burrow was a private trainer for Sheikh Hamdan until his death last year. With Shadwell now reducing its numbers, Burrows has opened his yard to other owners. Among those to send him horses is Ahmad Al Shaikh, whose recent runners have included the 2021 G3 Chester Vase scorer Youth Spirit (Ire) (Camelot {GB}) and the 2020 Derby runner-up Khalifa Sat (Ire) (Free Eagle {Ire}) with Andrew Balding.

“They've very kindly sent us a couple of yearlings, I've got an Acclamation and an Expert Eye which is great,” said Burrows. The trainer noted he will be busy at the upcoming sales looking for new recruits.

“We've got the February sale now at Tattersalls next week and there's the breeze-up sales, so hopefully before the season gets going we'll have added a few more to the list,” he said. “There's nothing better than advertising your talents with a big winner like that so, god-willing, he's [Hukum] able to go there in form and run a good race for us.”