Sharp Graduates Hitting on All Cylinders 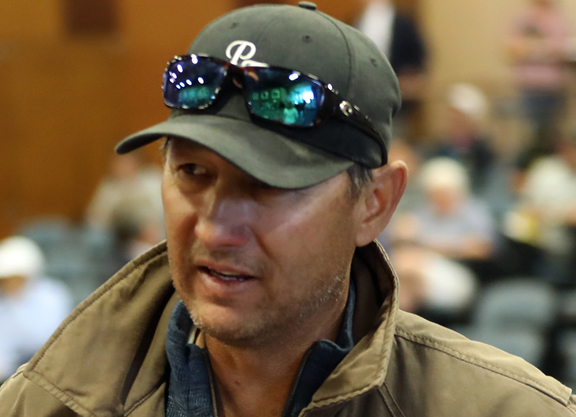 Paul Sharp thought he had a good group of 2-year-olds at his farm over the winter and those trainees are proving the Ocala horseman right with a string of five maiden winners in the last five days, plus two graded stakes placings at Del Mar and Saratoga.

“It always gives us a lot of gratification when these horses go on to win,” Sharp said Wednesday, shortly after Ava's Grace (Laoban)'s third-place finish in the GII Adirondack S. at Saratoga. “They can win first or second time out and usually the imprint of what we have done is there, you can tell with their training habits and the way they finish up. They develop their own patterns eventually, but it's always good to see them be competitive and win.”

Adding to the success, Get on the Bus (Uncle Mo), pinhooked by the partnership put together by Sharp and bloodstock agent Liz Crow, was second while making her debut in the Aug. 7 GII Sorrento S. for Reddam Racing.

Sharp and Crow have had plenty of success with their pinhooking partnership in recent years, but the two have also done well purchasing yearlings for end-users. Crow signed the ticket on behalf of clients for Emro ($130,000 FTKJUL), Coach ($65,000 FTKOCT), and Vulcan ($120,000 FTKJUL).

“Working with Liz is just one of the best things that has happened to us,” Sharp said. “We get along well. I am part of the selection process as far short-listing, we look at horses together. We look at the final list together, but ultimately she makes the final decision on the racehorses. She is very, very smart about what she does and I can't say enough good things about her and her work ethic. We get along well.”

Sharp breaks many of the Southern Equine horses and has seen plenty of the offspring of the operation's GII Jim Dandy H. winner Laoban, who stands at Sequel Stallions New York.

“They are gifted with natural talent and I think the further they go, the better they will be,” Sharp said of the stallion's early progeny. “They may not be the fastest horses, but they have the ability to have that higher cruising speed and carry it on out, which is what everybody wants.”

Laoban's daughter Ava's Grace tried to the take the field wire-to-wire in the Adirondack before succumbing to the impressive 'TDN Rising Star' Thoughtfully (Tapit).

“I did,” Sharp said when asked if he thought Ava's Grace was close to giving her freshman sire a graded stakes victory at Saratoga. “When she hit the top of the stretch, I was saying, 'Oh, my gosh, she's right there,' but Thoughtfully, she looks like an exceptional horse. But she ran a good race and I would expect her to move up off of that. Hopefully there are good things in the wings for Laoban, the Southern Equine crew and Sequel, too.”

Sharp is hopeful Get on the Bus can also move forward from her debut second in the Sorrento. The filly was purchased by Sharp and Crow for $150,000 at last year's Fasig-Tipton Saratoga sale and was resold to bloodstock agent Dennis O'Neill for $340,000 at this year's OBS March sale.

“We bought that horse in Saratoga,” Sharp said. “We liked her quite a bit and we thought she might have gotten overlooked. She was a little immature at the point she was at the sale compared to a lot of the horses that we were looking at. We got her home, she broke well, she trained well, did everything that was expected of her. We got her to the sale and she worked well, she was looked at quite a bit. We made some money and we were very happy with her. She ran a great race. The filly that beat here there I think is an exceptional horse [My Girl Red {Texas Red}]. Hopefully Get on the Bus comes back strong, too.

The coronavirus pandemic delayed the start of the racing season for many juveniles and Sharp admitted it was difficult waiting for his talented pupils to get to the track.

“We had a few more horses than we normally have and it just seemed like every set had a few standouts,” Sharp said. “The anticipation to get the year going was killing us. We felt like we were sitting on nice horses and it just took a while for racing to get going and things to evolve for trainers to have enough help to get the horses to the track. Now we are rolling and hopefully the year continues well.”

Despite the delay, training in Ocala went on pretty much as usual this past winter.

“It's always a progression,” Sharp said. “At some point, they are as far along as we can get them. Most of the horses that we send out to the racetrack are working three-eighths comfortably. We had to let them work a little further and progress to the next level, but that's all we were trying to do–keep everybody sound and happy. That's the most important thing. We just try to be patient and continue to develop the confidence in these horses.”

Never one to let the grass grow, Sharp celebrated the string of victories in typical horseman fashion.

“We are constantly mowing grass around here,” Sharp said with a chuckle. “So I was changing mower blades, putting new mower blades on in between watching races today.”