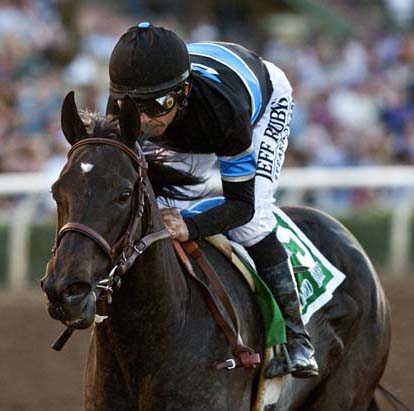 Champion Shared Belief (Candy Ride {Arg}–Common Hope, by Storm Cat) passed away suddenly Thursday after a bout of colic. He was rushed to UC Davis Thursday morning where he underwent emergency colic surgery, but the veterinarians were unable to save him, according to co-owner Jim Rome. The dark bay had just recently returned to training after sustaining a hip fracture during the GII Charles Town Classic Apr. 4. (Click here for a video of his final gallop at Golden Gate Dec. 2).

“Thoroughbred racing is a sport filled with the highest of highs and the lowest of lows,” Rome said. “Some of the most thrilling and surreal moments of our entire lives have occurred in this sport. Unfortunately, today we have suffered our most devastating. We have lost Shared Belief. He seemed to display signs of colic this morning, so our vets rushed in to treat him. They immediately sent him to UC Davis so he could get the best medical attention available, as quickly as possible. Emergency colic surgery was performed, but doctors were unable to save him. We are still awaiting results of an autopsy. We are all absolutely devastated.”

Rome continued, “Shared Belief was a once in a lifetime horse. A champion, fighter and unbelievable talent who impacted and changed all of our lives. The little horse that feared no one and could do anything. He absolutely loved his job and to compete and run. As heartbreaking as this is, we all consider ourselves so fortunate to have been a part of this amazing animal's life. He was a super horse from day one. He would end up winning 10 of 12 starts, including five Grade I's and an Eclipse Award. The Big Horse was a champion in every sense of the word. There will never be another like Shared Belief. Our hearts are broken. RIP.”

Forced to miss the first half of his sophomore season due to foot issues, Shared Belief returned with an allowance victory at Golden Gate at the end of May 2014 and captured the GII Los Alamitos Derby in his first start on dirt six weeks later. Defeating a field of talented older horses that included MGISW Game on Dude (Awesome Again) in Del Mar's GI Pacific Classic last August, the son of Candy Ride bested his elders once again next time out in Santa Anita's GI Awesome Again S.

Suffering his first defeat after being interfered with at the start of the 2014 GI Breeders' Cup Classic, Shared Belief registered an impressive run to finish fourth and went on to annex the GI Malibu S. last December. He kicked off his 4-year-old season with a defeat of dual Classic winner California Chrome (Lucky Pulpit) in Arcadia's GII San Antonio Invitational S. Feb. 7 and added a victory in the GI Santa Anita H. to his illustrious resume a month later. Shared Belief amassed a lifetime record of 12-10-0-0 and earnings of $2,932,200.

The dark bay was a half-sibling to graded winner Little Miss Holly (Maria's Mon), as well as stakes placed Double Major (Bertrando) and Major Hope (Lemon Drop Kid). He hailed from the family of Yankee Gentleman, Half Ours and Key Phrase. Common Hope has a yearling filly by Henrythenavigator, a weanling filly by Victory Gallop and was bred back to Candy Ride.