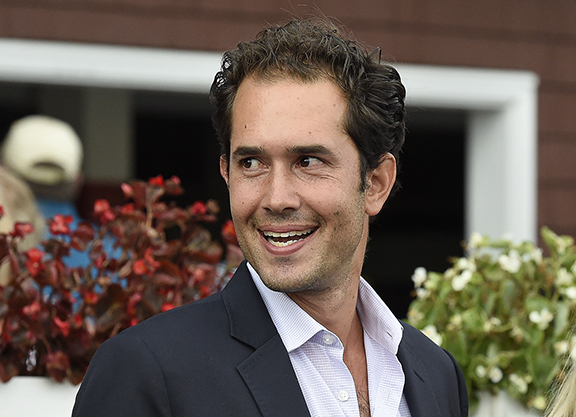 In the Saratoga finale Aug. 2, a filly named March X Press (Shanghai Bobby) began her racing career with little fanfare or expectation. She was let go at over 5-1 despite being a Todd Pletcher-trained firster in a New York-bred race. The gates opened and everyone came out running but her.

“What is this? This is pathetic,” thought Ben Goldberg, whose Golconda Stables owns the juvenile. March X Press hadn’t shown much in the mornings of late and Goldberg, making his owner debut, figured at that moment that he’d made a mistake in buying her for $90,000 at last year’s Keeneland September sale.

Such is the topsy-turvy nature of horse racing that, just over one minute later, Goldberg was experiencing one of the biggest thrills of his life. March X Press overcame her slow start and exploded home in the stretch of the turf sprint to get up by a neck for a highly improbable victory. Fast forward two weeks to the present, and the filly is now two-for-two and being considered for a start in a Grade I next time out.

Backed to favoritism in Wednesday’s Bolton Landing S. for 2-year-old fillies at Saratoga, March X Press once again didn’t make it easy on Goldberg. The dark bay broke poorly again, while not quite as slow out of the gate as she had been in her first start, and she found a world of trouble in the stretch, getting stopped, stymied and steadied for several seconds entering the final furlong. Once finding clear sailing, however, March X Press flew home under Jose Ortiz, inhaling the pacesetter in the closing strides to secure another unlikely win.

“It’s surreal,” Goldberg said on his way back to Manhattan Thursday morning. “They were breezing her on dirt and liked her when she started, but she kind of fell off. They kept pushing her start back. I said, ‘listen, we’re all big boys here, if she’s not going to be a runner, it’s OK.'”

Bloodstock agent Bradley Weisbord, whose BSW Bloodstock partner Liz Crow picked out March X Press, told Goldberg that maybe it was the surface and decided to try her on turf. That move proved to be the key, and now he and Goldberg are looking at Woodbine’s GI Natalma S. for a horse who showed no signs of anything close to that kind of ability leading up to her career bow.

Goldberg’s wife is childhood friends with Weisbord, who became his conduit into racing. Goldberg, 33, is the third generation of his family’s high-end diamond jewelry business. He had no experience with racing growing up, but a close friend in his industry named Elliott Friman has loved horses his whole life.

“Elliott has been a bit of a mentor to me in business and life,” Goldberg explained. “Horses are his passion. I said to him, ‘I’ll make the intro to Brad, let’s go buy one horse, see how it goes and go from there.’ Brad called me in September and said there was a filly he could get for $90,000 who could be good. Elliott said, ‘let’s go for it.'”

Jump ahead to Wednesday, and there’s Goldberg, in the Saratoga winner’s circle, being interviewed by NYRA’s Maggie Wolfendale.

“We’re under-the-radar people, not looking for any attention at all,” Goldberg said. “When she interviewed me, I was like, ‘What’s going on? I haven’t even processed any of this.'”

Because of her gate quirks, it’s hard to evaluate just how fast March X Press is, but one thing she’s proven to have is a lot of guts, winning twice in two tries despite such adverse circumstances, something Goldberg says he sees in her personality.

“She has a very calm demeanor,” he said. “But I think she has a killer instinct too. I feel like if they can get things fixed in terms of her breaking, she could win by more than a hair.”

Even if it may have risen his blood pressure, the filly’s dazzling running style does have its benefits for Goldberg.

“Those last 10 seconds before the end of the race are unbelievable,” he said.

If Pletcher and his team can get her involved for the rest of the seconds, Goldberg might have something special.