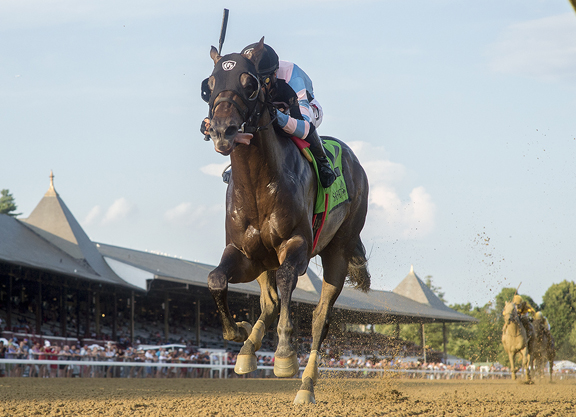 GSW Shancelot (Shanghai Bobby–True Kiss, by Is It True) has been retired from racing after exiting his breeze Monday with a soft tissue injury. The story was originally reported by the Daily Racing Form.

A $50,000 FTSAUG buy turned $245,000 OBSMAR juvenile purchase, the Crawford Farms Racing colorbearer opened his career with a trio of impressive wins, including Saratoga's GII Amsterdam S. in 2019. Third in the GI H. Allen Jerkens S. there next out, he was second in the GI Santa Anita Sprint Championship S. and completed the exacta behind champion Mitole (Eskendereya) in the GI Breeders' Cup Sprint S. that term.

Benched after that effort, Shancelot was transferred from Jorge Navarro to Steve Asmussen after Navarro was served a federal indictment for doping. Suffering another setback as he trained up to a comeback this summer, Shancelot returned to the worktab at Fair Grounds in November. He was being aimed toward the Saudi Sprint, but was injured during a five-panel breeze in 1:01.20 (1/28) in NOLA Monday. The dark bay retires with a record of 6-3-2-1 and earnings of $624,300.