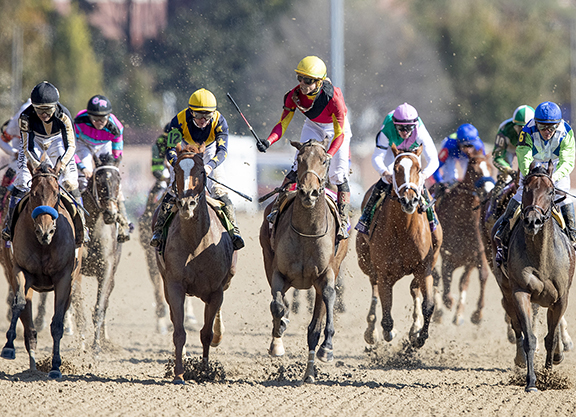 Shamrock Rose (First Dude), a late $130,000 Breeders' Cup supplement by Conrad Farms, unleashed a powerful, last-to-first stretch rally to reel in Chalon (Dialed In) in dramatic fashion by a head in the Filly & Mare Sprint.

The 25-1 chance trailed the field as comebacking 'TDN Rising Star Selcourt (Tiz Wonderful) blazed the way through fractions of :21.89 and :44.99. Still with plenty left to do at the top of the stretch, jockey Irad Ortiz Jr. and Shamrock Rose began to knife their way through traffic and just got up in the final jump to pull off the upset.

It was another neck back to 'TDN Rising Star' Anonymity (Tapit) in third. Heavily favored Marley's Freedom (Blame), off at odds of 4-5, came running late, but couldn't overcome a wide trip from her 13 draw and had to settle for a very close fourth.

“Was I surprised we won? It was a tough race, but she's a good horse,” said trainer Mark Casse after saddling his fifth career Breeders' Cup winner. “I told Irad I don't know if she's good enough, but she'll give you everything she has. And, she's good. It goes back to Allen Jerkens who always said 'Run them when they're good,' so we came back in two weeks.”

Casse continued, “I was a little concerned she was dropped back as far, but one thing about it, we have one of the best riders in the world on her and he made a decision, which, after about an eighth of a mile, made us win the race.”

Shamrock Rose is the first 3-year-old to defeat her elders in this race, which was inaugurated in 2007. This was the bay's first attempt versus older horses.

“Well, it's never easy to write a check like this unless you have a lot of money, but neither here nor there, we had faith in the horse and naturally I listened to Mark and she's been doing so great the last four races and why not have the fun and the excitement and come here,” Conrad said of supplementing his charge to the Breeders' Cup. “So if it you lose, you lose. I mean it's horse racing. That's what it is. And I really believe the horse is not done yet, in my opinion. She's just a great horse.”

Shamrock Rose, a $120,000 OBS April juvenile, became the first Grade I winner for First Dude in the F/M Sprint. Shamrock Rose is out of the unraced Elusive Quality mare Slew's Quality, a $35,000 KEENOV purchase in 2007 by Best A Luck Farm and a half-sister to French MGSW Slew the Red (Red Ransom). The 14-year-old mare is also responsible for the unraced juvenile colt Quality Pitch (Bandbox) and a yearling colt by Stay Thirsty. She was bred back to Hard Spun earlier this term. Shamrock Rose, who became the fourth graded stakes winner for her sire First Dude in Raven Run, hails from the family of Hall of Famer Lady's Secret (Secretariat) and South African champion Mahbooba (Aus) (Galileo {Ire}).