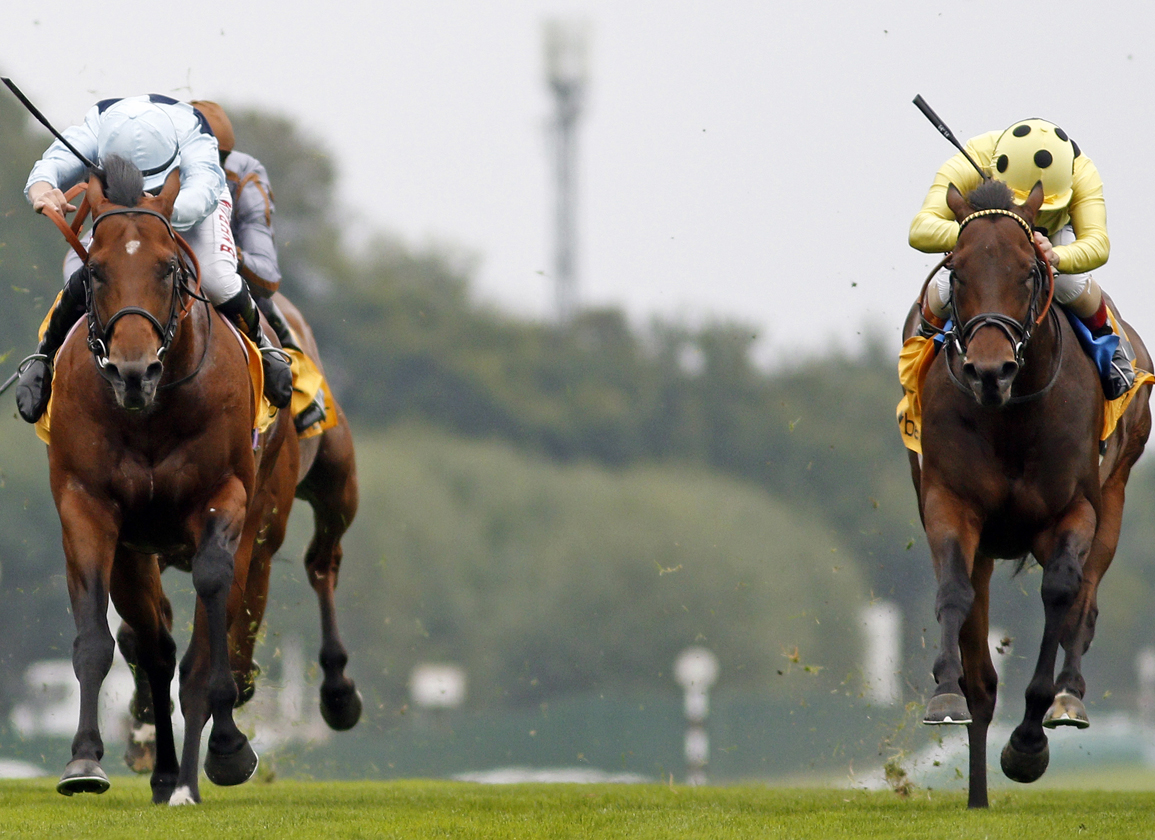 It was tight at the end of Saturday's G1 Betfair Sprint Cup at Haydock, with Andrea Atzeni celebrating a black-type treble on the day on Sheikh Mohammed Obaid Al Maktoum's Emaraaty Ana (GB) (Shamardal) who denied Starman (GB) (Dutch Art {GB}) in a photo. Revived of late, the 5-year-old who had been second in the five-furlong G1 Nunthorpe S. at York Aug. 20 tanked along early off the pace but had plenty left to take over approaching the final furlong. Clinging on late as the even-money favourite found his stride under a Tom Marquand drive, the line came in time for the 11-1 shot who held a short-head verdict there, with Chil Chil (GB) (Exceed and Excel {Aus}) 3/4 of a length away in third. “He deserves it–we've started riding him patiently and the horse has come alive for doing that,” trainer Kevin Ryan said. “I've had huge faith in the horse and I'm delighted he's done it. He's as good a horse as I've trained–his work in a morning is brilliant and all my team at home have done a great job.”

Emaraaty Ana's future was already bright as he landed York's G2 Gimcrack S. three years ago, but after a flirtation with the mile Classics the following Spring he gradually slid into relative obscurity. By the time the decision was made to geld following his last-of-eight in the G1 Nunthorpe S. last August, the bay was already something of a forgotten horse but on his return this year had a clean slate to work from. Positive tactics, which had been employed in the 2019 G1 2000 Guineas, were again used for his first five starts this term beginning with an underwhelming second in Doncaster's Listed Cammidge Trophy Mar. 27. Third in Newmarket's G3 Abernant S. Apr. 15, he was dropped from six furlongs to five for the G3 Palace House S. at Newmarket May 1 but the result was the same as he wound up at the bottom of the trifecta once again before trailing in seventh and 11th behind Starman in York's G2 Duke of York S. May 12 and in the G1 July Cup at Newmarket July 10.

It was only when connections opted to stop trying to force the issue and give him a chance in a five-furlong Hamilton conditions race at the end of last month that the real Emaraaty Ana stepped forward on the slick summer surface he needs. Visibly revitalised by the switch to hold-up tactics and a soaring sense of belief, he got closest to the flying Winter Power (Ire) (Bungle Inthejungle {GB}) in the Nunthorpe with the likes of Dragon Symbol (GB) (Cable Bay {Ire}) and Suesa (Ire) (Night of Thunder {Ire}) behind so it was a surprise to see double-figure odds freely available here. Still tending to over-race despite the customary generosity of Art Power (Ire) (Dark Angel {Ire}) up ahead and the more immediate target of last year's G1 Middle Park S. hero Supremacy (Ire) (Mehmas {Ire}), he was able to capitalise on Starman's “flat spot” to get first run on the favourite and get to the post in the nick of time.

“He was a great 2-year-old and he lost his way a little bit. Sheikh Mohammed Obaid has been very patient,” Kevin Ryan said. “We were riding him wrong. This is his trip. Last year he was a little bit disappointing, but he has come back to this level and I've had every belief in this horse. I always thought he would get back to the top level. I would say we would go for the Breeders' Cup. I can't see why not, as he would be tailor-made for it as they would go a fast pace on fast ground.”

Atzeni, who had earlier partnered the exciting juvenile Triple Time (Ire) (Frankel {GB}) to win the Listed Ascendant S. for these connections before doubling up on the G3 Superior Mile winner Artistic Rifles (Ire) (War Command), was ending a relative drought at this level. “He's a horse that everyone kept faith with throughout his career and I can't tell you what it means to me to win another group 1, it's been a couple of years since the last one,” he said. “Things can go a bit quiet, but it's all about the horses and I had a very good one underneath me here. He is a horse that we usually ride fairly forward, but as he ran so well in the Nunthorpe giving him a chance we wanted to do the same. He travelled like the best horse in the race and when I let him down he picked up good. To be fair to the horse, when the second horse came to him he found a little bit more and held on.” Starman's trainer Ed Walker said, “There are no excuses, it's disappointing.”

Given that Emaraaty Ana's dam Spirit of Dubai (Ire) (Cape Cross {Ire}) signed off her career with success in the 12-furlong Listed Princess Royal S., it is no surprise that Kevin Ryan had the Guineas in mind but this is clearly a runner who is defying his pedigree. Spirit of Dubai is kin to another middle-distance performer in the G3 Prix Corrida and G3 Prix de Flore winner and stakes producer Trumbaka (Ire) (In the Wings {GB}), while this is the family of the G3 Prix Cleopatre winner Alexandrie (Val de l'Orne {Fr}). She is the dam of five black-type winners headed by the G1 Prix du Jockey Club-placed sire Poliglote (GB) (Sadler's Wells) and is also the second dam of the GI Eddie Read H. scorer Special Ring (Nureyev). Spirit of Dubai's as-yet unnamed 2-year-old filly by Ribchester (Ire) was bought by Nigel Tinkler Racing and Jamie Piggott for 140,000gns at the Tattersalls October Yearling Sale Book 1.