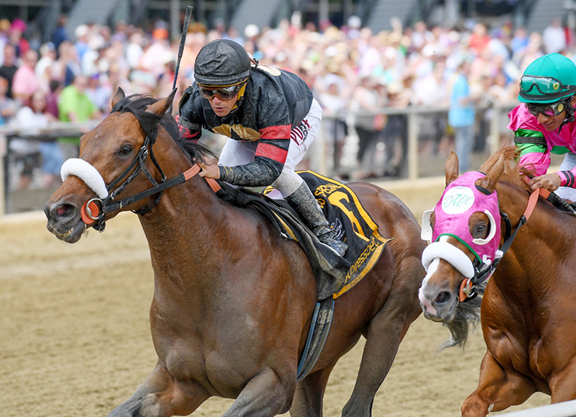 “The Adena Springs Champion homebred is the subject of a newly formed California-based strategic alliance between Adena Springs, Lovacres Ranch and EF1 Farm,” said Ben Walden of Adena Springs. “Through their mutual support, promotion, and pooling of broodmares, the three entities have combined forces to establish the stallion career of Shaman Ghost in California.”

Shaman Ghost, who stands for $7,500 stands and nurses, accumulated a record of 8-3-2 from 17 starts and banked over $3.8 million in earnings on the track. His greatest achievements on the track include wins in the GI Woodward S. and GI Santa Anita H., as well as a runner-up finish in the GI Pegasus World Cup Invitational.

“There is a shortage of horses in the state of California, and 40% of California breeders have closed their doors,” said Eric Yohan of EF1 Farm. “Shaman Ghost and the energy and commitment of Frank Stronach is a much-needed shot in the arm to breeding and racing here. Add this to the efforts of John Harris' Harris Farm and the new Stronach Group management team of Tim Ritvo, and we have a strong chance to see tangible growth in the racing and breeding industry of California. I am honored to be breeding to Shaman Ghost on a large scale, to be standing City Wolf and North Light, and to be affiliated with Terry and Frank.”

“We are grateful to Tommy Town for their efforts pertaining to the stallion and for the mares that they provided,” said Frank Stronach.

For more information on Shaman Ghost, contact Terry Lovingier at 562-547-9848, or visit Lovacres.com.