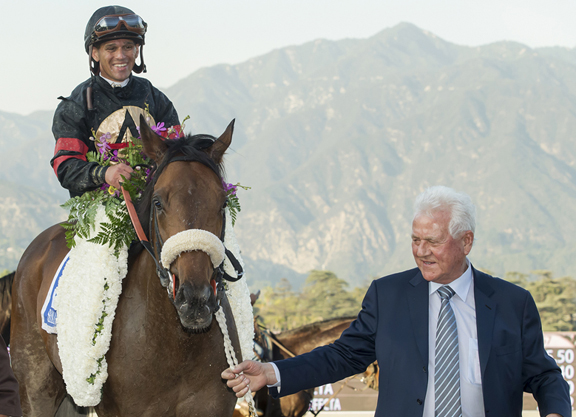 Stronach Stables' Shaman Ghost (Ghostzapper) has been retired from racing and will stand the 2018 breeding season in California, Adena Springs officials confirmed Monday. As first reported by BloodHorse, the 5-year-old's presence will spearhead an initiative put forth by Frank Stronach to improve the overall health of the breeding and racing industries in the Golden State.

Shaman Ghost notched a pair of Grade I wins in the 2016 Woodward S. at Saratoga and the Santa Anita H. in March of 2017. He ran arguably one of the best races of his career in defeat, finishing second behind North America's all-time richest Thoroughbred Arrogate (Unbridled's Song) in the inaugural GI Pegasus World Cup at Gulfstream Park in January. Following his win in the Big Cap, the bay won the GIII Pimlico Special H. May 19 and was last seen completing the exacta in the GII Suburban S. at Belmont July 8. He retires with a record of 8-3-2 from 17 lifetime starts and earnings of $3,859,311.

A Monday morning post on trainer Jimmy Jerkens's Twitter page read, “Shaman Ghost will be greatly missed by us here at the barn. We look forward to seeing him in the next stage of his career.”