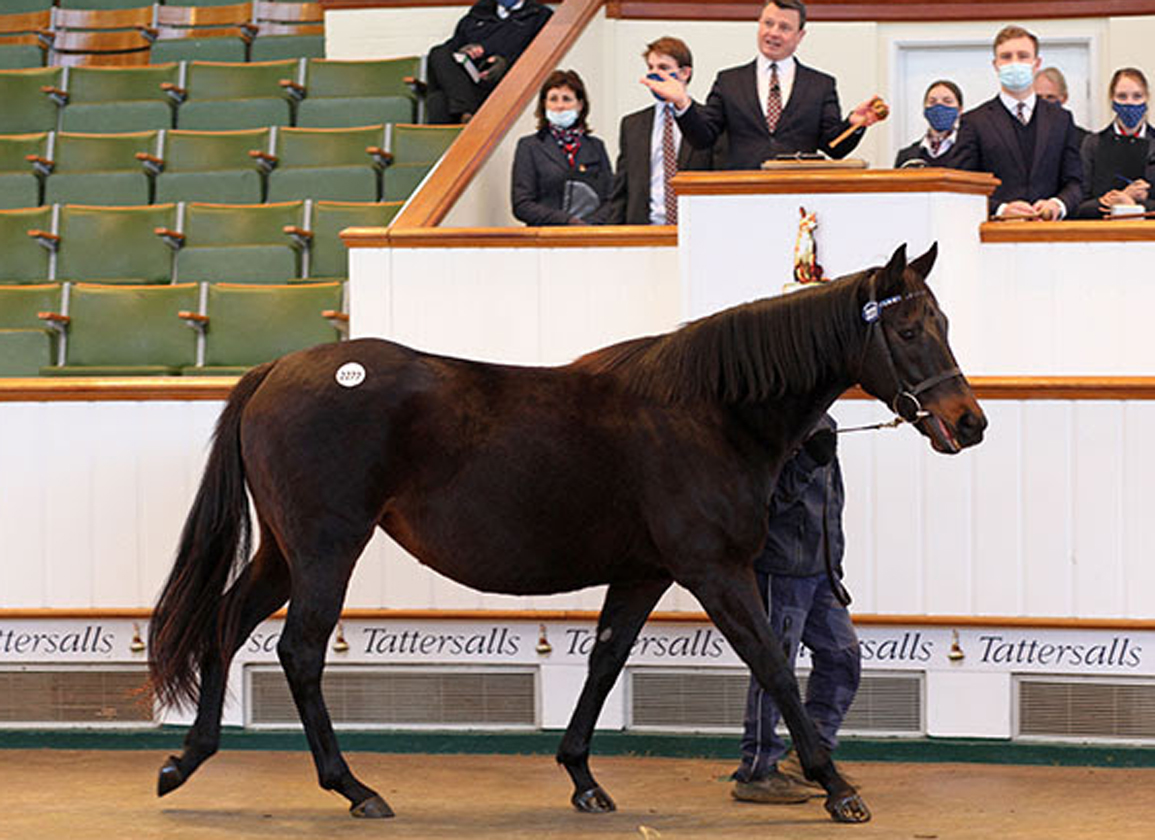 Demand for bloodstock continued in Newmarket on Thursday, albeit at a lower price bracket, as Adaalah (GB) (Oasis Dream {GB}), a member of the Shadwell draft, brought 82,000gns to top the fourth and final session of the Tattersalls December Mare Sale as the curtain fell on the sales season at Park Paddocks for 2021.

“We don't know plans yet, I need to call Saudi and find out,”said Saud Al Qahtani, who was bidding on behalf of Najd Stud's Prince Faisal bin Khalid bin Abdulaziz. “She may stay here with other mares or she may ship to Saudi. We have also bought lot 1790, Under The Stars (Ire) (300,000gns), who is in-foal to Frankel (GB). They may stay with Ted Voute, who, of course, reared this year's champion Mishriff (Ire) (Make Believe {GB}).

Adaalah's foal of 2021 was knocked down for 15,000gns by BBA Ireland at the Tattersalls December Foal Sale.

“This mare is by Oasis Dream, which was very attractive for us,” continued Al Qahtani, who also signed for two other mares on Thursday, among them Shadwell's winning Etaab (Street Cry {Ire}) (lot 2328), in foal to Muhaarar {GB}, for17,000gns. “He is a good broodmare sire. She has had a very nice foal this year by the same stallion. We are hoping to build a significant operation in Europe.”

Another Shadwell consignee, Sareeha (Ire) (Shamardal), caught the eye of JD Moore at 52,000gns. Lot 2379, out of the winning Saraha (GB) (Dansili {GB}), has one run to her name. The second dam is the Listed Prix Charles Laffitte victress Kareemah (Ire) (Peintre Celebre) and this is the extended family of champion and Shadwell royalty Lahudood (GB) (Singspiel {Ire}).

“She is for a client, we like her profile and she is by Shamardal,” JD Moore said. “She looked green on her start at Chelmsford in September. We will make plans when she gets to her new yard.”

“Record medians at both the December Yearling Sale and December Foal Sale demonstrated the extraordinary depth in all sectors of the market and we have seen that replicated over the past four days with buyers from throughout the world all contributing to a sale which has not only comfortably surpassed last year's returns but also the pre-pandemic levels of 2019.

“The 2021 Tattersalls December Mares Sale has produced turnover well in excess of 60 million guineas, 45% higher than last year, wide-margin gains in average and median, an impressive clearance rate above 80% and an unprecedented 164 fillies and mares which have sold for 100,000 guineas or more. Annual turnover at Tattersalls has leapt from 260 million guineas in 2020 to more than 320 million guineas this year, a figure bettered only twice and a clear demonstration of a wider industry which has quickly regained confidence and vibrance after the rigours of last year.

“The four outstanding seven figure lots, Waldlied, Cayenne Pepper, Sunday Times, and Flotus, all paid tribute to the consistent demand for bloodstock of the highest quality which has been the feature of the 2021 Tattersalls sales season, but the real highlight has been the opportunity to welcome back so many international buyers to Park Paddocks. The Tattersalls December Mares Sale showcases the very best breeding stock to be found in Europe, and the easing of travel restrictions has seen the return of the uniquely international atmosphere to this historic fixture with international buyers competing at all levels of the market. Buyers from America, Australia, France and Japan have been particularly prominent and the throng of overseas participants have faced strong competition throughout from their British and Irish counterparts.

“As well as recognising the massive contribution from the buyers we must also pay tribute to the consignors who every year make the Tattersalls December Sale a highlight of the international bloodstock sales calendar. The major consignments from Godolphin, Juddmonte Farms and Shadwell Estates, as well as the dispersal of Sir Robert Ogden's fillies and mares, proved to be hugely popular and the support of the top consignors from Britain, Ireland and France has yet again been rewarded with the unrelenting global demand which has long been the hallmark of Europe's premier sale of breeding stock.”