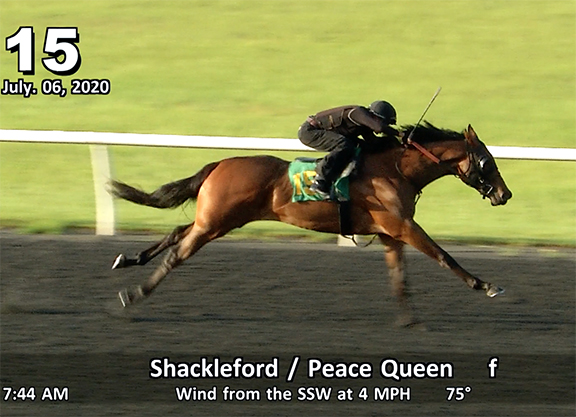 The six-session under-tack show for next week’s Ocala Breeders’ Sales Company’s July 2-Year-Olds and Horses of Racing Age Sale began Monday and, with temperatures quickly rising into the upper 80’s, the day’s last of three sets was twice delayed as fierce rainstorms swept through the area.

A filly by Shackleford (hip 15), working early in the day’s first set, turned in the session’s fastest quarter-mile time of :20 4/5. Consigned by Jesse Hoppel’s Coastal Equine, the bay filly is out of Peace Queen (Indian Charlie), a half-sister to multiple graded stakes winner Tizaqueena (Tiznow).

“We expected her to be a very fast horse,” Hoppel said. “I didn’t know if she’d be the fastest horse breezing today, but I knew she would be right up there.”

Hoppel continued, “She is a big, classy-looking filly. She doesn’t have any vices about her, physically or mentally. She is a horse you can count on. So leading her up there, we expected her to breeze well and she did.”

The consignor said he was happy with the track conditions at OBS Monday.

“The track was a slow track today, but the slow tracks let horses separate themselves more,” Hoppel said. “A fast track will speed up a slow horse, but not necessarily help a fast horse.”

Hoppel is consigning the youngster on behalf of New York breeder James Doyle, brother of KatieRich Farm owner Larry Doyle. James Doyle, who purchased Peace Queen for $10,000 at the 2013 Fasig-Tipton New York Mixed Sale, currently has just two broodmares. Also through Coastal Equine, he will be offering a filly by Dialed In out of a granddaughter of Inside Information (Private Account) (hip 542) who is scheduled to work Thursday.

“I am lucky my brother has a great operation down there, so many times I drop them in New York and then they go to KatieRich for some kindergarten training in Kentucky,” Doyle said. “And I kind of draft on him a little bit.”

Asked if it was his brother who led him into racing, Doyle said with a laugh, “It was just the other way around. He blames me.”

Of his Shackleford filly, Doyle said, “She has just been a joy since the day she hit the ground. She has size and she’s obviously fast. The mare is a great Darley mare and Jesse Hoppel has just done an outstanding job with her.”

As for how the juvenile ended up at the 2-year-old sales, Doyle laughed again and said, “I forgot to put her in a yearling sale–how about that?”

A colt by Ride on Curlin (hip 66) was first to work the co-fastest :10 flat time Monday. Consigned by Grassroots Training and Sales, the dark bay is out of Rated Xtreme (Magna Graduate), a full-sister to graded winner Blueeysintherein. He was purchased by Grassroots for $11,000 at last year’s OBS October Yearling Sale.

A colt by Race Day (hip 27) went the furlong in :10 flat for consignor Bobby Dodd. He is out of Pistolpackinsenora (Closing Argument). Also from Dodd’s consignment, hip 143, a filly by Tale of Ekati, worked in :10 flat. The bay is out of Shelby’s Song (Songandaprayer). Both juveniles were bred by Misty and Brad Grady.

Hip 49, a daughter of Into Mischief, went in :10 flat. Consigned by Brick City Thoroughbreds, the bay filly is out of graded stakes winner Prospective Saint (Saint Ballado) and is a half-sister to graded placed Island Saint (Speightstown). Bred by Mulholland Springs, the juvenile RNA’d for $170,000 at the OBS March sale following a :10 2/5 work earlier this year.

A daughter of Frosted (hip 82) worked in :10 flat for consignor Eddie Woods. The bay filly is out of the unraced Ride to Houston (Candy Ride {Arg}), a half-sister to multiple graded stakes winner Runway Model (Petionville), who is the dam of Grade I winner McKinzie (Street Sense). Bred by Whisper Hill Farm, she RNA’d for $275,000 at last year’s Fasig-Tipton Saratoga sale.

From the Wavertree Stables consignment, a filly by Malibu Moon (hip 115) went in :10 flat Monday morning. The chestnut it out of Samsational (Unbridled’s Song), an unraced half-sister to Grade I winner I Want Revenge (Stephen Got Even). She was purchased by Joe Minor’s JSM Equine for $125,000 at last year’s Fasig-Tipton October Yearling Sale.

“The later part of the day, the weather affected conditions,” Hoppel said. “I don’t know how it affected the track itself. The last page of the breeze show was riddled with a lot of scratches, so there weren’t as many horses who had to deal with the weather later in the day. Early in the day, down here this time of year, it gets hot pretty fast. So we just do everything we can to help these horses be as happy as they can be and of course help ourselves-it’s hot for us, too.”

The first session of the under tack show was lightly attended, but Hoppel noted it’s a long time to sale time.

“It’s a six-day breeze show and it’s hot,” he said. “I think OBS does a good job of putting these videos online and now incorporating walking videos. I think a lot of people are going to be doing their homework and getting their notes off the tougher individuals who are sitting on the turn, possibly. So I think right now, with the six-day breeze show, it’s too early to tell what the attendance is going to be like here. I think for a filly like [hip 15], there are going to be people looking for good horses like that. The other levels, I don’t know what parties are scheduled to attend, but the more the merrier.”

The under tack show continues through Saturday with sessions beginning daily at 7:30 a.m. The July sale will be held next Tuesday through Thursday with bidding commencing at 10 a.m.