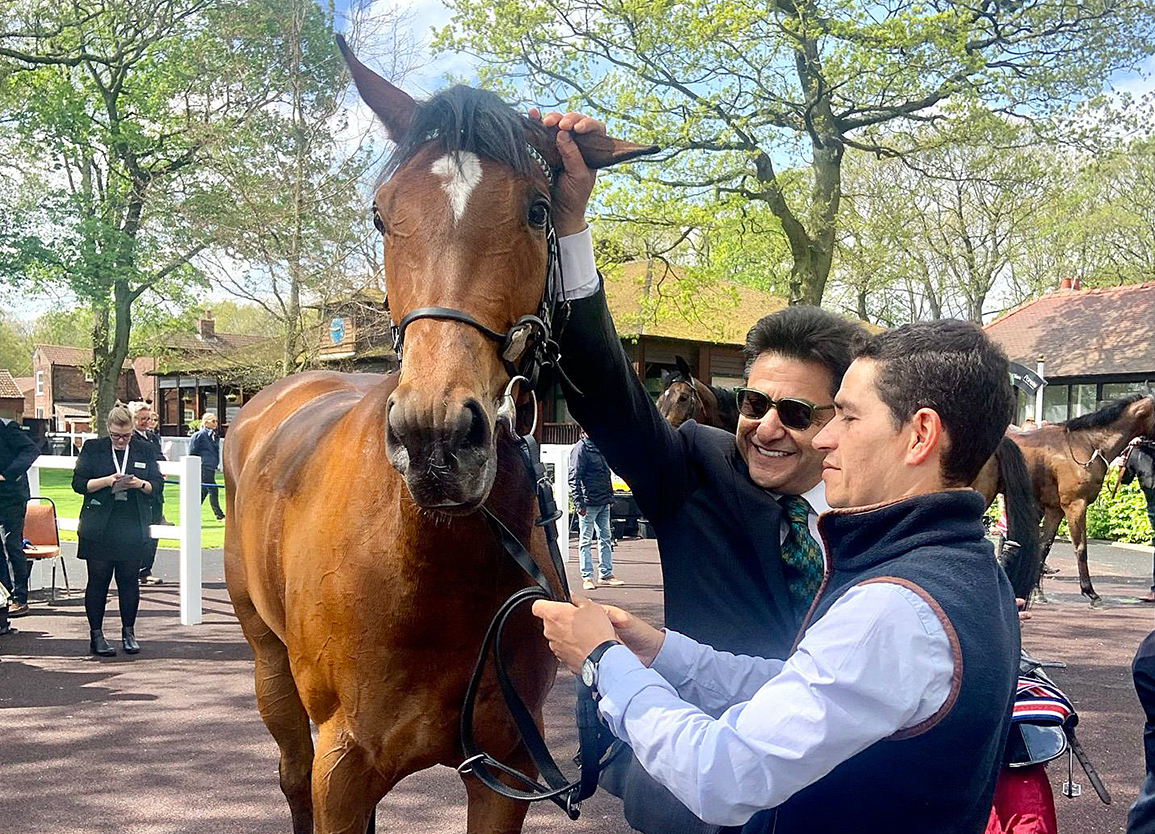 A few weeks ago the bookmaker Fitzdares made Dubawi (Ire) favourite to be champion sire this year for the first time, and perhaps no horse deserves it more than Darley's utterly dependable 20-year-old. However, the race to the top will not be easy, particularly judging by the apparent strength in depth of the challenge of Frankel's offspring for this year's major races.

Though the reigning champion, as well as the Gosden stable and owner-breeders Cheveley Park Stud, were dealt a blow by the withdrawal of Inspiral (GB) from Sunday's QIPCO 1000 Guineas, the season is but young. The G1 Coronation S. at Royal Ascot now seems to be the favoured target for Inspiral's reappearance, and naturally she also holds entries for the Irish 1000 Guineas and the Oaks.

In the meantime, Frankel has not been short of promising 3-year-olds to represent him in the past week, with a number of them signalling the blossoming of the Gosden yard, which had been a little slower to spring to life this season compared to last. The six winners from Clarehaven Stables over the last seven days included a Saturday double from Nashwa (GB) and Magisterial (GB), both by Frankel and both with Epsom on their agenda.

Nashwa represents the 'Cracksman cross' of Frankel on Pivotal (GB), the filly's dam, Princess Loulou (Ire) having been bought as a yearling from breeder David Brown of Furnace Mill Stud for 310,000gns. Having raced for the partnership of Imad Al Sagar and Saleh Al Homaizi, finishing runner-up in the G1 Prix Jean Romanet and then landing the Listed Gillies Fillies' S. on her final start, Princess Loulou is now wholly owned by Al Sagar. The Kuwaiti owner-breeder has continued to be a significant solo presence among the British ranks and earlier this year bolstered his team at Blue Diamond Stud with the appointments of Teddy Grimthorpe and Ted Voute. Nashwa's odds quartered for the Oaks following her facile win on Saturday, and she would be fully deserving of a place at Epsom in a bid to give her owner his chance of celebrating a third Classic success following Authorized (Ire) in the Derby and Araafa (Ire) in the Irish 2000 Guineas.

Owner-breeder Bjorn Nielsen has made no secret of how he yearns to win the Derby, and he has a potential candidate this year in Magisterial, the Frankel colt out of Hoity Toity (GB) (Darshaan {GB}). Epsom omens can be found not too far away in his pedigree as Magisterial's half-sister Lillie Langtry (Ire) (Danehill Dancer {Ire}) is the dam of the 2016 Oaks heroine Minding (Ire), by Frankel's sire Galileo (Ire), and indeed that mighty racemare's full-sister Tuesday (Ire) is currently favourite for this year's Oaks following her maiden win at Naas in March.

A Day At The Races

Second-favourite to Tuesday in the Oaks betting following the most visually impressive performance of last week is another Gosden trainee, Emily Upjohn (GB) (Sea The Stars {Ire}). Bred under a foal-share arrangement between her sire's owner, the Tsuis' Sunderland Holdings, and Lordship Stud, the statuesque filly was let go as a yearling for 60,000gns at October Book 2. She now has two wins to her name from two starts, and carried seven pounds more than her 11 rivals on Friday for her initial victory at Wolverhampton last November, which makes her nine-and-a-half-length win even more noteworthy.

“Not many horses take my breath away,” said Frankie Dettori after dismounting from Emily Upjohn, who takes her name from a character in the Marx Brothers film A Day At The Races and hails from the immediate family of Sea The Stars's Derby winner Harzand (Ire). The jockey, who would know better than anyone, added ominously, “Enable was big and it never stopped her.”

John Gosden has won the Oaks three times in the last eight years, starting with another daughter of Sea The Stars, Taghrooda (Ire). The stable looks well placed to add Thady Gosden's name to a Classic roll of honour this season, even without Inspiral lining up this Sunday at Newmarket.

Godolphin weren't exactly short of Derby entries, with 13 remaining in the list, but that number was boosted by one last Tuesday when a rare well-bred colt without an entry, Nahanni (GB)–yep, you've guessed it, another son of Frankel–landed the 'win and you're in' Listed Cazoo Blue Riband Trial at Epsom. Out of a Street Cry (Ire) half-sister to Godolphin's St Leger winner Mastery (GB) (Sulamani {Ire}), Nahanni is already a winner over the Derby distance, but at least four of his Charlie Appleby stable-mates remain ahead of him in the betting.

Friday's G3 Classic Trial at Sandown went the way of yet another Frankel, the Juddmonte homebred Westover (GB), who narrowly came out on top after a tussle with Cash (Ire) (Shamardal). Trained by Ralph Beckett, Westover is a full-brother to Monarchs Glen (GB), one of Frankel's earliest stakes winners. Their dam Mirabilis (Lear Fan)–a Grade III winner in 2006 for the man whom Frankel was named–is a half-sister to the G1 Prix de Diane winner Nebraska Tornado (Storm Cat).

It was disappointing to see only three runners for the G3 Gordon Richards S. on Sandown's Friday card and, with two of those being by Frankel, it was no surprise to see him with yet another back-type victor to his credit. This time it was his 4-year-old son Mostahdaf (GB), owned and bred by Shadwell, and it was another good result for the resurgent Gosden stable, which was also previously home to Mostahdaf's dual Group 1-winning half-sister Nazeef (GB) (Invincible Spirit {Ire}).

Among a potentially strong team of older horses for Frankel this season is Kirsten Rausing's treble Group 1 winner Alpinista (GB), who looks set to return in the G1 Coronation Cup, in which she could face last year's Derby winner Adayar (Ire), who shares her sire.

Alpinista was the first foal of her dam Alwilda (GB), a Listed-winning daughter of the late Lanwades sire Hernando (Fr) and Albanova (GB) (Alzao), who, like her grand-daughter, also won three Group 1 races in Germany.

Alwilda's second foal, a 3-year-old filly named Alpenblume (GB) (Kendargent {Fr}), has been entrusted by her breeder to second-season Chantilly trainer and old family friend Tim Donworth, who on Sunday sent the filly out to win on debut at Le Pin au Haras.

Interestingly, Scandinavian legend cites Alwilda as a princess-turned-pirate, and she was the inspiration for the tragic poem Il Re Torrismondo, by Torquato Tasso. Food for thought for future mating plans when last year's Arc winner retires to stud.

While Frankel's runners have been dominating the news this week, the name currently at the head of the general sires' list in Europe is Dark Angel (Ire), and he was represented by a hotly anticipated runner on Thursday when Battaash's full-brother The Antarctic (Ire) overcame a little unrest in the stalls to win well on debut for Aidan O'Brien.

The colt, out of Anna Law (Ire) (Lawman {Fr}), was the first of two winners on the Tipperary card for his breeder Ballyphilip Stud. The second came in the following race when Messa Concertata (Ire) (Ardad {Ire}), who is also out of a Lawman mare, took the 3-year-old maiden for Joseph Murphy.

While it seems fair to assume that O'Brien will be aiming The Antarctic towards Royal Ascot, one of his winners last week who confirmed his ticket to Berkshire was New York City (Ire) (Invincible Spirit {Ire}), who has the G1 Commonwealth Cup on his agenda after winning the Listed Committed S. at Navan. Both Aidan and Joseph O'Brien will now be high on the Christmas card list for the Cantillon family of Tinnakill House, who bred New York City from the G1 Falmouth S. winner Rajeem (GB) (Diktat {GB}), whom they purchased from Darley for €26,000 in 2015. Earlier that year the mare had foaled subsequent G2 Duke Of York S. winner Invincible Army (Ire), a full-brother to New York City who is now at Yeomanstown Stud alongside Dark Angel. The Tinnakill team also bred Joseph O'Brien's globetrotting stable star State Of Rest (Ire) (Starspangledbanner {Aus}), winner of the G1 Cox Plate and GI Saratoga Derby.

Moyglare Stud has enjoyed a decent start to the season, with Group 3 winner Homeless Songs (Ire) (Frankel {GB}), who remains in the picture for Sunday's 1000 Guineas, and first-time-out juvenile winner Tough Talk (Ire) (Kingman {GB}). Better still, on Saturday Eva Bucher-Haefner's operation had the first two home in the Listed Vintage Crop S with full-siblings, the third-generation homebreds Kyprios (Ire) and Search For A Song (Ire), both by Galileo and aged four and six respectively.

They are but two of eight black-type winners for their dam Polished Gem (Ire) (Danehill), two of whom, Search For A Song and Free Eagle (Ire) (High Chaparral {Ire}), are Group 1 winners. Now a true blue hen for Moyglare, Polished Gem's sole win in five starts came in a Leopardstown maiden, and she was outshone on the track by her full-sister, the GI Matriarch S. winner Dress To Thrill (Ire), who won six stakes races and was runner-up in the G1 Moyglare Stud S. Less fortunate at stud, however, Dress To Thrill left six foals, only two of whom won, before she died as an 11-year-old.

Another of their siblings, Trust In Luck (Ire) (Nashwan), features as the grand-dam of the G1 National S. winner Thunder Moon (Ire) (Zoffany {Ire}).

Mehmas (Ire) hasn't put a foot wrong since retiring to Tally-Ho Stud, and has been both the leading first- and second-crop sire in Europe. His statistics in the U.S. make for interesting reading, too, albeit from a small sample to date, though it's easy to see that changing in the coming years, especially with the renewed participation of American buyers at European yearling sales.

Over the weekend, Chez Pierre (Fr), who was unbeaten in France when trained by Francis Graffard, has kept a clean sheet since being sold to race in the States, winning at Tampa Bay in March before landing his first stakes success in the Listed Henry S Clark S. at Laurel Park for Lael Stables and trainer Arnaud Delacour.

Chez Pierre is the third black-type winner in America for Mehmas following GI Del Mar Oaks victrix Going Global (Ire), who is a winning machine across the Atlantic with six graded stakes to her name, and the listed winner Quatroelle (Ire).

Malavath (Ire), who has to have a decent chance of giving Mehmas his first Classic winner in Sunday's 1000 Guineas, was second in the G1 Breeders' Cup Juvenile Fillies Turf, while Tetragonal (Ire), Keeper Of Time (Ire) and Optimising (Ire) are also stakes placed. In total, of Mehmas's 14 runners in America, eight have won.

There aren't too many Dubawi fillies who change hands for 35,000gns, but that was the price paid for Rogue Millennium (Ire), who was bought by Billy Jackson-Stops on behalf of trainer Tom Clover and owners The Rogues Gallery from the Shadwell draft last December.

In a good week for the Newmarket trainer, the 3-year-old out of the G3 Cumberland Lodge S. winner Hawaafez (GB) (Nayef) made her debut at Wetherby and hinted at a bright future ahead with a decisive win. Her page also has plenty of depth to it, featuring Group 1 winners Moonlight Cloud (GB), Generous (Ire) and Imagine (Ire).

It wasn't only the Clover stable celebrating the victory as Robbie Mills of RMM Bloodstock consigns Rogue Millennium's half-sister by Awtaad (Ire) to this week's Guineas Breeze-up Sale at Tattersalls as Lot 315. With a perfectly-timed update, let's hope she posts a similarly well-timed breeze on the Rowley Mile on Tuesday morning.