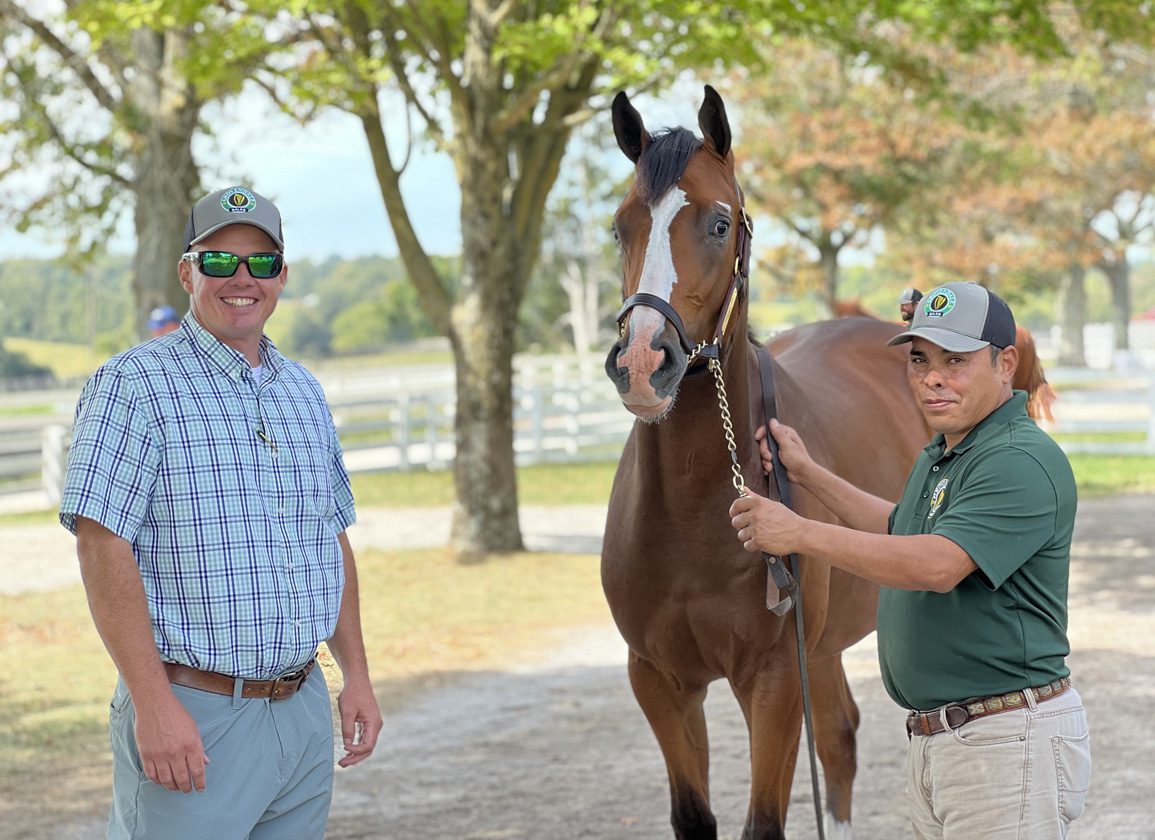 Making a 5 a.m. trip to Walgreens for Vicks VapoRub was probably not what Chance Timm envisioned as part of his job description when he partnered with James Keogh at Grovendale Sales earlier this year, but when your consignment needs its supplies replenished during the second half of the Keeneland September Sale, you do what you need to do.

Timm is more than happy to take on some of those less-than-glamorous duties. In fact, he enjoys them.

“I like being hands on,” Timm said Monday morning while showing Book 4 yearlings at Barn 43. “I like being involved in everything that happens. We run a pretty tight ship, but James and I will both wear whatever hat is needed so that whatever needs to be done gets done. We love being involved and understanding all the little intricacies about each horse so we're able to make those small changes throughout the process that may really help.”

Timm has been involved in the Thoroughbred business for over 15 years, including eight years serving as the Director of Stallions Seasons and Shares at Lane's End Farm. While he has spent his fair share of time combing through the barns at various sales over the years, this is his first experience as a consignor during the marathon that is the Keeneland September Sale.

“It's nuts,” he said with a laugh and a wipe of his brow. “I was lucky at Lane's End that I was involved in the sales process but– fortunately or otherwise–I never had to deal with the minutiae and all the intricate details that come with putting something like this on. But I am now and it's exciting. It's great to work for yourself and put that pressure on yourself to make it happen. James has given me an unbelievable opportunity to partner with him and take advantage of his name, reputation and what he has built here. Hopefully I can build on it too.” 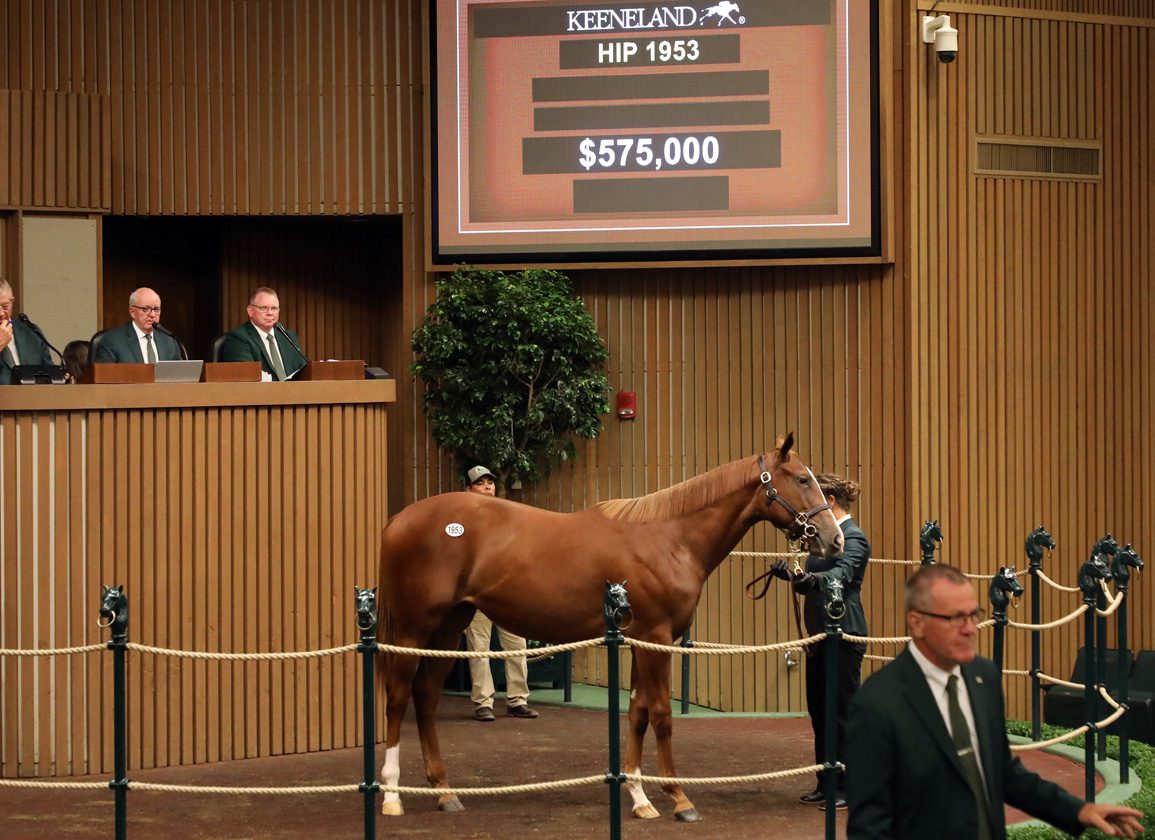 Grovendale Sales sent a $575,000 Munnings filly through the ring during the sixth session of Keeneland September | Keeneland

During its first Keeneland September operating under the Keogh-Timm partnership banner, Grovendale is already in the midst of a successful auction. On Sunday, they sold the session-topping filly for $575,000 to West Bloodstock for Repole Stables. The daughter of Munnings out of the stakes-placed Unbridled's Song mare Oh Carole was bred by Chelsea Bloodstock, Galtee Bloodstock and Paget Bloodstock.

Timm noted that the headlining filly had all the top players looking at her over the weekend.

“That's why we have horse sales,” he said. “When buyers hook up, they can exceed your expectations. She was an impressive filly with a lot of class. She had a lot of leg and length to her and was very robust. I would think she's an exceptional model of her sire and the market agreed.”

As for the marketplace in its entirety, Timm explained that they have found it to be a continuation of the polarized market.

“It's exceptionally strong at the top,” he said. “For those that are deemed as desirable, it's crazy strong. The filly yesterday had an enormous amount of interest and it's crazy for those kinds of horses, but it's probably equally polarized on the other end. If they fall through the cracks or people don't like them, it kind of is what it is.”

With just under 30 yearlings on Grovendale's Keeneland September roster, Timm said that the group represents many of Keogh's longstanding clients as well as some he shares a connection with through the various positions he has held in the industry over the years.

“There are a lot of people that have come with me as I've joined the partnership,” he explained. “Fallbrook Farm, Gail Radke, Jackpot Farm and Summer Wind Farm are all organizations that I am lucky to have a close association with and they're willing to support Grovendale. WinStar Farm has had a long association with James. They raise a really nice horse and I think people are aware of that so we're grateful for their continued support.”

One of Grovendale's seven yearlings going through the ring on Tuesday during Book 4 was bred and raised at WinStar. The colt by Winstar's first-crop yearling sire Yoshida (Jpn) is from the family of GISW Corinthian (Pulpit) and sells as Hip 2543.

“He's a really strong physical,” Timm shared. “We purposefully placed him in Book 4. I thought he was good enough to be in Book 3 and Keeneland originally placed him there, but we felt like he would stand out in Book 4. I think he'll represent his sire and his farm well.”

Timm said that another promising youngster from their list of Book 4 offerings is Hip 2672, a filly by World of Trouble.

“I think she'll be represented well here in this spot too,” he noted. “She's by a first-crop sire and she has a wonderful profile. Herbener Farm raised her and we're honored to have the opportunity to represent the Herbener family.”

Other yearlings preparing to go through the ring for Grovendale in the coming sessions showcase sire power like Munnings, Uncle Mo and Justify, as well as additional first-crop yearling sires in Vino Rosso, Mitole and Coal Front.

Once the September Sale concludes, Timm and Keogh will be preparing for a busy Keeneland November. Last year Grovendale was a top 10 consignor there with gross sales of over $6.9 million.

Timm said that as Grovendale evolves, they hope to maintain the consignment's well-known presence at the breeding stock sales while also widening their reach on the yearling side of the business.

“I think for the most part, James' business in the past has been pointed toward the breeding stock sales and we have a really strong group of about 80 horses pointing towards this November Sale,” he explained. “I'd say the opportunity for us is within the yearling market. It's something I hope to contribute to over time, but we're never looking to be a large consignment. I think for both of us, our primary motivation is helping the people that we represent do well. We try to do whatever we can to be hands on and help people make the right decisions so they can maximize the value of their horses.”