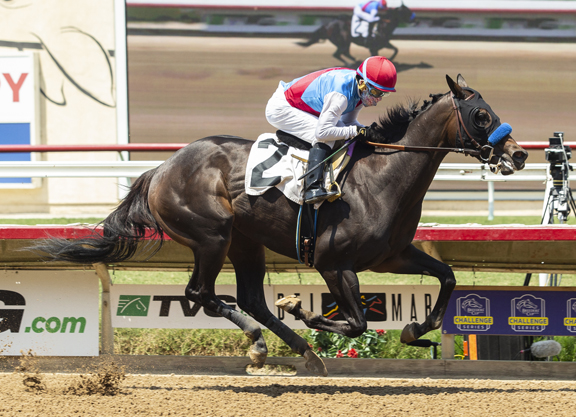 Seven horses make their career debut in this potential-laden nine-horse field, headed by PROTONIC POWER (Protonico), part of an uncoupled entry for the Todd Pletcher barn. Owned by Sumaya US Stable, who campaigned his sire, the colt is out of Grade III winner Sheza Smoke Show (Wilko), making him a half to 2020 OBS April topper and subsequent Grade I winner Princess Noor (Not This Time). The bay stayed home at Belmont for the summer and shows an upbeat worktab, highlighted by a half-mile gate breeze in :48 2/5 (5/66) over the main track Aug. 28. The other half of the Pletcher duo is Al Shaqab Racing's narrow morning-line favorite Afjan (Uncle Mo). The homebred is the second foal to race out of GSW/MGISP Scarlet Strike (Smart Strike), following this year's British G3 Supreme S. hero Toro Strike (Toronado {Ire}). Scarlet Strike is also a half-sister to Grade I winners Tara's Tango (Unbridled's Song) and Visionaire (Grand Slam). Afjan most recently breezed a sharp five furlongs from the gate over the local training track in 1:00 3/5 (2/28) Sept. 10. Cairama (Cairo Prince) turned heads at OBS March when breezing a furlong in :9 4/5 before hammering for $525,000, 35 times her sire's stud fee and debuts from the rail for the red-hot Steve Asmussen barn. Pegged as a 15-1 longshot on the morning line in his career bow for Nick Zito, Atlantic Thoroughbreds' Atlantic Dancer (American Pharoah) is a half-brother to last year's GII Tampa Bay Derby hero and GI Arkansas Derby runner-up King Guillermo (Uncle Mo) and hammered for $400,000 as a Keeneland September yearling. TJCIS PPs