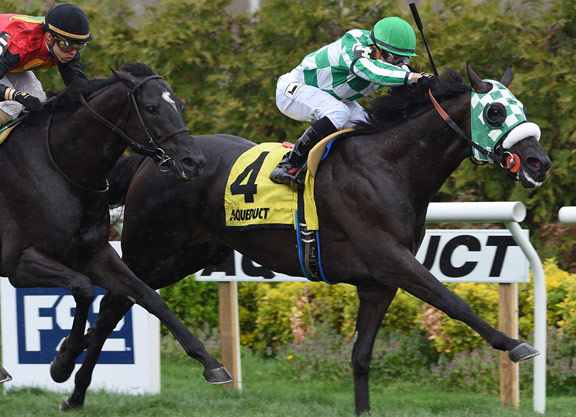 Allen Stable homebred Secretary at War (War Front) dug in determinedly to notch a front-running victory in Aqueduct's Woodhaven S. Apr. 22 and the progressive dark bay will receive the sternest test of his career in Saturday's GIII Pennine Ridge S. The nine-furlong test–which has become a prep race for the July 8 GI Belmont Derby–features the likes of GI Breeders' Cup Juvenile Turf hero Oscar Performance (Kitten's Joy), who seeks to get back on track after a pair of disappointing efforts over rain-dampened turf courses to begin his 3-year-old season.

On the heels of two straight front-running tallies, Secretary at War figures to be forwardly placed once again while navigating nine furlongs for the first time. Stamina should not be an issue for the Jimmy Jerkens trainee, whose dam Ballet Pacifica (Minardi) won at 10 furlongs, while second dam Kostroma (Ire) (Caerleon) captured the GI Beverly D. S. in 1992.

Oscar Performance, meanwhile must find a way to reverse his form after losing ground in the stretch when fifth in Keeneland's Apr. 7 GIII Transylvania S. and 10th in the GII American Turf S. at Churchill May 6. The bay annexed the GIII Pilgrim S. over the Belmont turf last October, setting him up for his triumph at the World Championships Nov. 4.

With the aforementioned pair expected to engage on the front end, graded stakes winners Good Samaritan (Harlan's Holiday) and Ticonderoga (Tapit), third and fourth, respectively, in the Breeders' Cup Juvenile Turf, should have pace to set up their late rallies. Ticonderoga, who hails from the ever-dangerous Chad Brown barn, followed a win in the GIII Palm Beach S. with an even fourth-place effort in the Transylvania. GII Summer S. hero Good Samaritan was far back early and rallied to check in second, beaten just a length, in the American Turf–his sophomore debut. The Bill Mott trainee has been training at Saratoga in the interim and could be primed to fire his best shot in his second start off the bench.

Mossarosa's Makarios (Giant's Causeway) is a big, long-striding colt whose two wins came at distances of nine furlongs or longer, while Bowies Hero (Artie Schiller) represents a new face on the scene, shipping in for trainer Phil D'Amato fresh off a late-running success in Santa Anita's Singletary S. May 6.