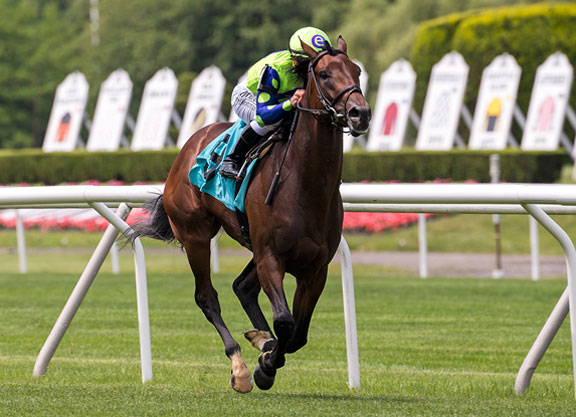 Arlington's GI Secretariat S., contested at a mile and a quarter since 1985, has been turned back in distance to a one-mile event this year, and drew a competitive nine-horse field for Saturday's running at the Chicago area oval.

True to form, Chad Brown has a pair of imposing runners in Peter Brant's Fog of War (War Front) and e Five Racing Thoroughbreds and Mike Ryan's Valid Point (Scat Daddy). Fog of War, who followed up a debut victory with a popular score in the GI Summer S. at Woodbine, was laid off for the next eight-plus months before returning with a disappointing sixth in the Paradise Creek S. May 25 at Belmont. The $400,000 Keeneland September grad bounced back, however, with a good second when adding blinkers in a salty renewal of the Manila S. July 4 in Elmont, out of which third finisher Casa Creed (Jimmy Creed) returned to win the GII Hall of Fame S. last week at Saratoga.

Valid Point rallied to a sharp and well-bet first-out success Feb. 10 at Gulfstream and repeated with a 3 1/2-length allowance triumph June 7 at Belmont, in which he clocked a :44.92 final half-mile split.

Aidan O'Brien sends over a pair for Coolmore looking for his record-extending fifth Secretariat win, led by Never No More (Ire) (No Nay Never). A second-out graduate over the Dundalk all-weather last October, the chestnut was seventh at even-money in the Irish Stallion Farms EBF Legacy S. to close his 2-year-old account. Returning with an 8-1 tally in the Naas Racecourse Business Club Madrid H. Mar. 24, he repeated in the Ballylinch Stud Red Rocks 2,000 Guineas Trial last out Apr. 6 at Leopardstown.

Van Beethoven (Scat Daddy) has kept better company, but has been out of the trifecta in eight straight outings since conquering the G2 GAIN Railway S. last summer at The Curragh. Spending his last three starts in Group 1 waters, the dark bay was sixth in the G1 Emirates French 2,000 Guineas May 12 at Longchamp, seventh in the G1 Tattersalls Irish 2,000 Guineas 13 days later at The Curragh and eighth in the G1 St. James's Palace S. June 18 at Royal Ascot.