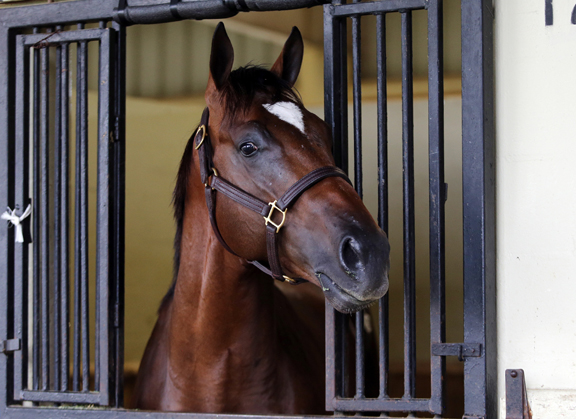 Vittorio at the OBS Spring Sale | Photos by Z

Off to a tardy beginning after breaking inward at the start, the 4-1 chance, equipped with blinkers, was slow into stride and trailed the field in ninth through an opening quarter in :23.28. He began to make a flashy, sweeping move while four/five wide on the far turn beneath Mike Smith as Freedom Fighter (Violence) led with Dixie's Two Stents (Quality Road) in hot pursuit in second.

Into fifth and looking a potential danger as they turned for home despite the slow start and wide trip, Vittorio raced a bit greenly from there hanging on his left lead and lugging in some as the top two ran away from the field with Freedom Fighter digging down gamely for a head victory. It was another 5 1/4 lengths back to Petruchio (Into Mischief) in third, who chased the top two throughout in a race that the speed held very well together.

Vittorio, 8 1/4 lengths adrift the winner, earned a 53 Beyer Speed Figure for the effort. He is trained by Simon Callaghan.

“He got left behind at the start and lost all chance,” Shah said. “Mike Smith liked the horse, and with more gate works in him, he should be a different horse in his next start. Vittorio came out of his race in good shape. He should improve with more distance down the road.”

Vittorio, a $250,000 Keeneland September yearling graduate, was the fifth most expensive purchase at this year's postponed Spring Sale in Ocala after breezing an eighth in a bullet :9 4/5 from the Sequel Bloodstock consignment. Bloodstock agent Ben McElroy signed the ticket on behalf of Shah.

“The good horses cost a lot of money for sure,” Shah said. “I do like the 2-year-old in training sales where most of my horse racing success has come from and I had to stretch a lot to get him–Bob Baffert was the underbidder. Simon Callaghan and Ben McElroy liked this horse a lot at the sale.”

Bred in Kentucky by Stonestreet Thoroughbred Holdings, Vittorio is out of a half-sister to MSW & MGSP Foxy Danseur (Mr. Greeley), the dam of graded stakes-winning 'TDN Rising Star' Ever So Clever (Medaglia d'Oro).

“Vittorio means victorious in Italian,” Shah concluded. “I sure hope he is a winner of many prestigious races down the road.”