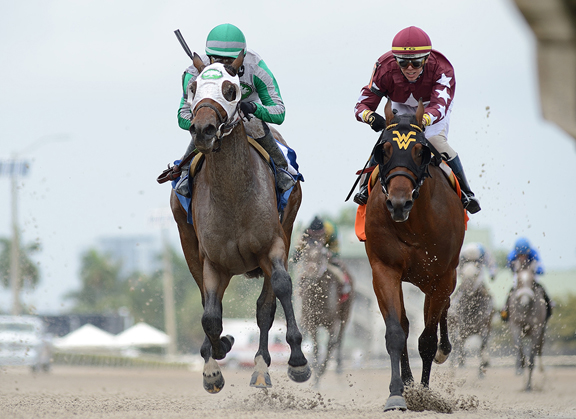 The highly regarded Golden Pal (Uncle Mo) set a blistering early pace and had to settle for second in one of the first baby races of the season on the Gulfstream Park dirt last week. What's the confidence level like now surrounding the 2-year-old colt after getting upset as the 1-2 favorite on debut?

“It's funny, about half an hour ago, I was booking airline reservations to Heathrow Airport to get to London in June,” owner/breeder Randy Lowe replied from his Las Vegas base.

After eyeing his four-furlong spin over the Palm Meadows lawn Apr. 11 with this video courtesy of XBTV, you can certainly see why.

“I spoke with Wesley Ward at length [Tuesday] and he keeps comparing Golden Pal to No Nay Never and those are big shoes to fill,” Lowe said.

No Nay Never (Scat Daddy), of course, began his career with three straight victories for Ward, headed by wins in those aforementioned prestigious overseas targets in 2013. This year's Royal meeting, slated for June 16-20, is to be held behind closed doors, it was recently announced.

“I don't want to jinx ourselves, but he's been very positive and he's adamant about running at Royal Ascot,” Lowe said. “After talking with him, I'm really hoping that The Queen still holds the meet.”

Drawn in post seven in his unveiling, Golden Pal bumped with a rival one to his outside at the break before blasting off to a two-length advantage beneath Tyler Gaffalione through an opening quarter in :21.58 (video). He locked horns with Gatsby (Brethren) as they cornered for home and boxed on gamely down the stretch to make the winner fight for every inch.

“I can't remember ever seeing another 2-year-old run a :21 2/5 opening quarter mile, especially after not breaking on top, and he was still trying to fight back,” Lowe said. “We knew he was fast, but when Tyler Gaffalione pushed the button, he really pushed the button. I think that race was a good learning experience. I'd love for him to break his maiden on grass next time if we can find a race and then go on to Royal Ascot.”

Lady Shipman, just a $35,000 RNA as an OBS April 2-year-old, tired to third in her first career start over the Gulfstream Park West dirt, then switched to grass with a 'TDN Rising Star' performance scoring by double digits in Miami at second asking. The Lowe homebred captured 13 career victories–11 in stakes–and was just a neck shy of a win against the boys in the 2015 GI Breeders' Cup Turf Sprint at Keeneland.

Golden Pal failed to meet his reserve when the hammer dropped at $325,000 at last year's Keeneland September sale. He was just one bid shy of changing hands, per Lowe.

“Like mother, like son, I'm hoping,” Lowe said. “He almost has Lady Shipman-type speed. I was hoping she'd pass it on to him.”

Sadly, the 8-year-old mare lost her Justify foal earlier this year. She was covered by Omaha Beach for the 2021 season.

“John Mabee used to say to me, 'I've taken you to the Kentucky Derby, Breeders' Cup and all around the world,'” Lowe concluded. “'Now, get back on your own.'”

Through the exploits of Lady Shipman, and now her offspring, Lowe is certainly on his way.