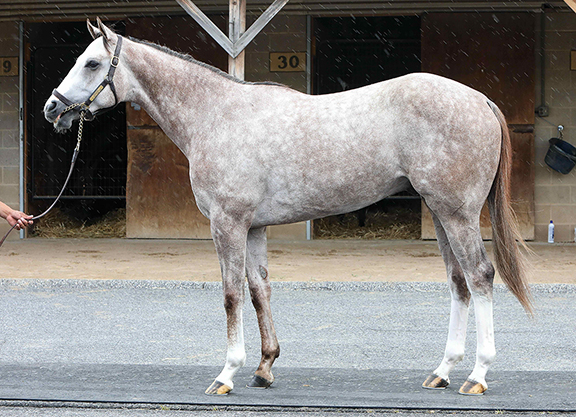 Everesting (c, 3, Frosted–If Not For Her, by Not For Love) stamped himself as one to watch following a better-than-it-looked fifth-place finish on debut behind 'TDN Rising Star' Annex (Constitution) going two turns over the Gulfstream lawn Jan. 16 (video).

The gray's worktab included a pair of bullets at trainer Saffie Joseph, Jr.'s Palm Meadows base, led by a four-furlong breeze in :47 (1/74) Jan. 9.

Off at odds of 12-1, he hopped at the start after exiting from post nine and was bumped by a rival one to his inside. Edgard Zayas got him over and secured a two-wide journey around the clubhouse turn. Sixth without cover and ready to roll through a half-mile in :47.30, Everesting began to launch with a flashy, three/four-wide blitz on the far turn and led his nine rivals as they cornered for home. He began to get leg weary in the stretch, however, and ran out of gas in the final furlong to finish fifth, beaten 3 1/4 lengths.

The impressive, come-from-behind winner Annex stopped the timer for the one-mile distance in 1:34.93 and earned an 81 Beyer Speed Figure. Everesting was assigned a respectable 74.

Bred in Kentucky by Three Chimneys Farm, Everesting RNA'd for $170,000 as a Keeneland September yearling and later brought $110,000 from Cash is King, LC Racing and John Fanelli after breezing an eighth in :10 2/5 out of the Cary Frommer consignment at last year's Fasig-Tipton Midlantic 2-Year-Olds in Training Sale.

Everesting's page is one that Cash is King's frontman Chuck Zacney is certainly familiar with.

Hailing from the first crop of Frosted, he is the first foal out of the three-time winner and stakes-placed mare If Not For Her. The 10-year-old is a half-sister to MSW & MGSP Awesome Flower (Flower Alley), GSP First Mondays (Curlin) and a full-sister to the winning dam of MSW & GSP Monday Morning QB (Imagining).

“I thought he ran a really good race,” Zacney said. “It was a quick time. It certainly was a sweeping move and I think he's going to get a whole lot out of it. Our intent was probably for a dirt race, but unfortunately one was not quite there yet, so we decided to try the turf. Saffie made the comment that he was breaking a little slow from the gate [in the morning], so he thought the turf race would help him a little bit more. We were quite pleased with the effort. It's certainly going to help him going forward.”

Anything in mind yet for Everesting's next start?

“Nah, we'll figure that out still,” Zacney said. “He's going to work a week from this Saturday on the 30th, and we'll go from there. I think the intent probably will be a mile or a mile and a sixteenth on the dirt. We'll have Saffie tell us what's best for him.”