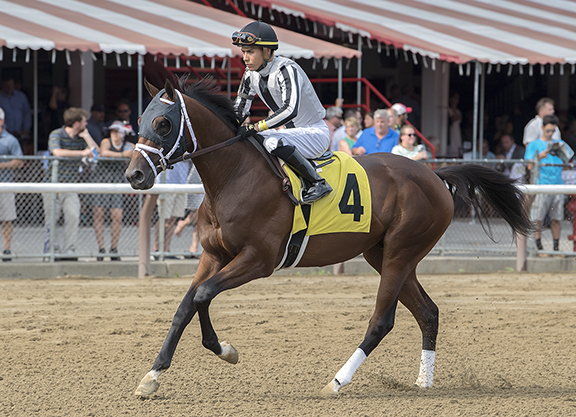 In this continuing series, TDN’s Senior Editor Steve Sherack catches up with the connections of promising maidens to keep on your radar. In this edition, a pair of 2-year-olds-Candy Tycoon (Twirling Candy) and Honor A. P. (Honor Code)–are highlighted. Previous runners featured in this column include: MGISW and ‘TDN Rising Star’ Paradise Woods (Union Rags), GSW Backyard Heaven (Tizway) and MSW and ‘TDN Rising Star’ Gidu (Ire) (Frankel {GB}). La Chancla (Uncle Mo), featured in this space in early June, has won two straight since, including a Saratoga allowance Aug. 10.

There was no shortage of backstretch buzz surrounding Candy Tycoon (c, 2, Twirling Candy-Liberty’s Lyric, by Unbridled’s Song) as he lined up for his 6 1/2-furlong debut on the GI Alabama S. undercard at the Spa Saturday afternoon (video).

Little went right for the Mathis Stable colorbearer once they sprung the latch, however, hitting the gate at the start and getting bumped hard shortly thereafter. Last of nine early, the blinkered dark bay began to get rank on jockey Jose Ortiz while caught in traffic through an opening quarter in :22.18. Still with plenty to do as they straightened for home, Candy Tycoon brushed with a rival in the stretch and finished up with good interest to complete the trifecta, beaten 4 1/4 lengths by second-time starter American Butterfly (American Pharoah).

“We’re still very optimistic on the horse,” owner Bill Mathis said. “It’s unfortunate that he got such an initiation of what can go wrong in a race. Watching him get that dirt in his face for a half-mile or so after what happened at the start, that was quite an education for a first-time starter. He had been impressive in the mornings–not only working terrific–but also galloping out so strong after every breeze. It just looks like there’s more there in the tank. There was a lot of talk about him heading in and several people had come up to us that we respect highly in the business and they were very open saying that this horse is really going to be special.”

As for what’s next for Candy Tycoon, Mathis said, “Todd [Pletcher] tells me that we’ll just see what the first book at Belmont has. If there’s a maiden race early that we could run him in, and if he runs like we think he’s capable of, that would still leave us one of the bigger races in October that would set him up maybe for a trip out west [for the Breeders’ Cup at Santa Anita].”

The blaze-faced Honor A. P. (r, 2, Honor Code-Hollywood Story, by Wild Rush), meanwhile, also caught the eye with a flashy rally from last of 10 to finish a strong second in his unveiling at Del Mar (video) later Saturday evening.

Hailing from the very patient John Shirreffs barn, the 8-1 shot was quickly outsprinted and caboosed the field through early fractions of :22.10 and :45.62 on their six-furlong journey. Honor A. P. entered the picture as they hit the far turn and began to gobble up ground on the extreme outside beneath Hall of Famer Mike Smith. While the pacesetter Ginobili (Munnings) proved not for catching, the long-striding dark bay leveled off nicely down the lane just to get up for second, beaten 2 1/2 lengths, and kept on rolling with good energy on the gallop out. Bob Baffert’s duo of Hydrogen (Violence) and Bronn (Conveyance) stayed on for third and fourth, respectively, after pressing a pace that held together.

Carrying the purple-and-gold colors of C R K Stable, Honor A. P. clocked his final eighth in easily a field-best :12.05 and earned a very respectable 77 Beyer Speed Figure. The $850,000 FTSAUG graduate was the most expensive of 61 yearlings to switch hands from the first crop of his freshman sire. Bred in Kentucky by George Krikorian, he is out of two-time Grade I heroine Hollywood Story. She has also produced the stakes winner Miss Hollywood (Malibu Moon); multiple graded-placed Hollywood Star (Malibu Moon) and multiple stakes-placed Hoorayforhollywood (Storm Cat).

“He’s a beautiful horse from a great family,” owner Lee Searing said. “I expected him to fall behind early, however, when they show that kind of run first time out and can fight off the kickback of dirt, I was very impressed. He has every right now to being the kind of horse with a big future. Mike Smith rode him perfect as you would expect. I am sure John [Shirreffs] will have him ready at Santa Anita. On thing for sure, Mike said he would ride him back.”