Home » Archive » On Aftercare » Second Career for Italian Racehorses? How About as Movie Stars?

Second Career for Italian Racehorses? How About as Movie Stars? 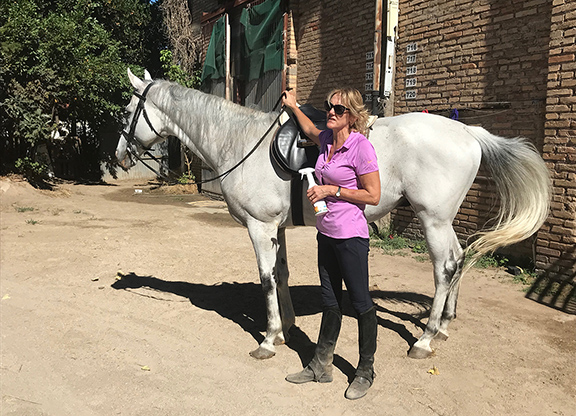 Reclaiming lives and starring in the movies are all part of a program for off-track Thoroughbreds in Italy.

At Ippodromo Roma Capannelle in Rome, Italy, Standardbreds and Thoroughbreds pass each other on the many horse paths that cross the sprawling 345-acre facility. In between the training tracks, on large grassy areas, you will see Thoroughbreds being trained for the pleasure riding, the show ring and the cinema. Relived Horses, a rescue and retraining program located in an older barn at the edge of the stable area, exists because of the efforts of former leading jockey and movie stunt woman, Jaqueline Freda and veteran show rider and horse trainer, Sabina Findlay.

“Slow is fast. Fast is slow.” That is the mantra repeated by Sabina to describe the process of retraining a Thoroughbred racehorse. The philosophy that going too fast impedes the progress grows out of an appreciation for natural horsemanship, the work of Monty Roberts, and a belief that the relationship between horses and people is therapeutic and healing. Findlay learned about Roberts when he did a demonstration of his techniques in Rome and talked about his life's journey with horses. Roberts's story inspired Sabina, who credits horses for getting her through difficult times in her youth, to start teaching horsemanship to students in Rome. These are not just any students. The young people in her program have been tagged by the establishment as difficult and sent to the Giuseppe Garibaldi Agricultural Technical Institute rather than to a traditional academic high school. She approached the school to launch a program in which the students come to the Relived barn every day to learn all elements of horse care, stable management and training.

“The boys are often troubled kids who are seeking a solution rather than trying to study Latin or Greek. With us, they have gained self respect and self esteem through their relationship and kinship with the horses,” said Findlay. “We train with only kindness and leadership skills that come with natural horsemanship. They never punish or use fear or intimidation with the horses–only love and understanding.”

These tenets are particularly important when teaching the horses the skills that they may use on the movie sets. The lead trainer, Hassan Majdoul, was hired by Freda because of his way with both the horses and the young people. In the video below, he and a young student, Filippo, demonstrate how the horse lies down on command. Trust is a key element in teaching a prey animal to do something unusual like this. The two bays, Forest Bear (unraced) and Stick at Nothing, are now veteran movie horses. Stick At Nothing, an Irish-bred by Tagula, showed promise when he just missed the board in a Group 3 stakes race, but he was injured in his last start and did not finish the race. He is now an important part of Freda's theatre troupe.

A key horse in the program is Dream Impact, a New York-bred by Royal Academy purchased for $26,000 at the 2002 OBS August yearling sale by bloodstock agent Paolo Romanelli. Sent to Europe, Dream Impact went on to win more than $540,000 in 51 starts, all in Europe, GB and the U.A.E. He went on to play Andrea Bocelli's horse in a television series, La Musica del Silenzio.

“Often the horses on the movie sets spend time standing or walking in regalia which is not very stressful, physically,” commented rider Daphne Hewitt who, when she lived in the U.S., re-trained Thoroughbreds for the Thoroughbred Retirement Foundation. Her current job with the United Nations has her stationed in Rome. She rides horses for the group at Capannelle on weekends.

“With good natural horsemanship, the horses learn to handle the other unusual circumstances on the sets, making the movies a viable and productive second career for many horses.”

We caught up with Hewitt on a hot sunny morning right before she rode a beautiful chestnut, Pistolino. He is a 5-year-old Italian-bred by Daggers Drawn who did not break his maiden before retiring after three tries. He is a precocious horse and has shown much talent which Hewitt said would be best directed in three-day eventing.

“Generally, horses are donated to Relived by owners and trainers who know and trust the program,” explained Freda. “In Italy, when retirement for a Thoroughbred is not secured, the horse could easily end up in the slaughter pipeline or in an illegal racing ring.”

Freda's father, Riccardo, is a renowned Italian movie director, and she is especially diligent about the humane treatment of the horses on the movie sets. She follows the on-set protocols established in the U.S. by organizations such as the American Humane Association and is developing the equivalent standard for all movie makers in Italy.

Determined to make an even larger impact on the population of Thoroughbreds needing new homes after racing in Italy, the group is working on a prison-based program similar to Thoroughbred Retirement Foundation's Second Chances program in America.

This story was posted in On Aftercare, Shared News, Top News.