Search Results Back to Winning Ways in the Acorn 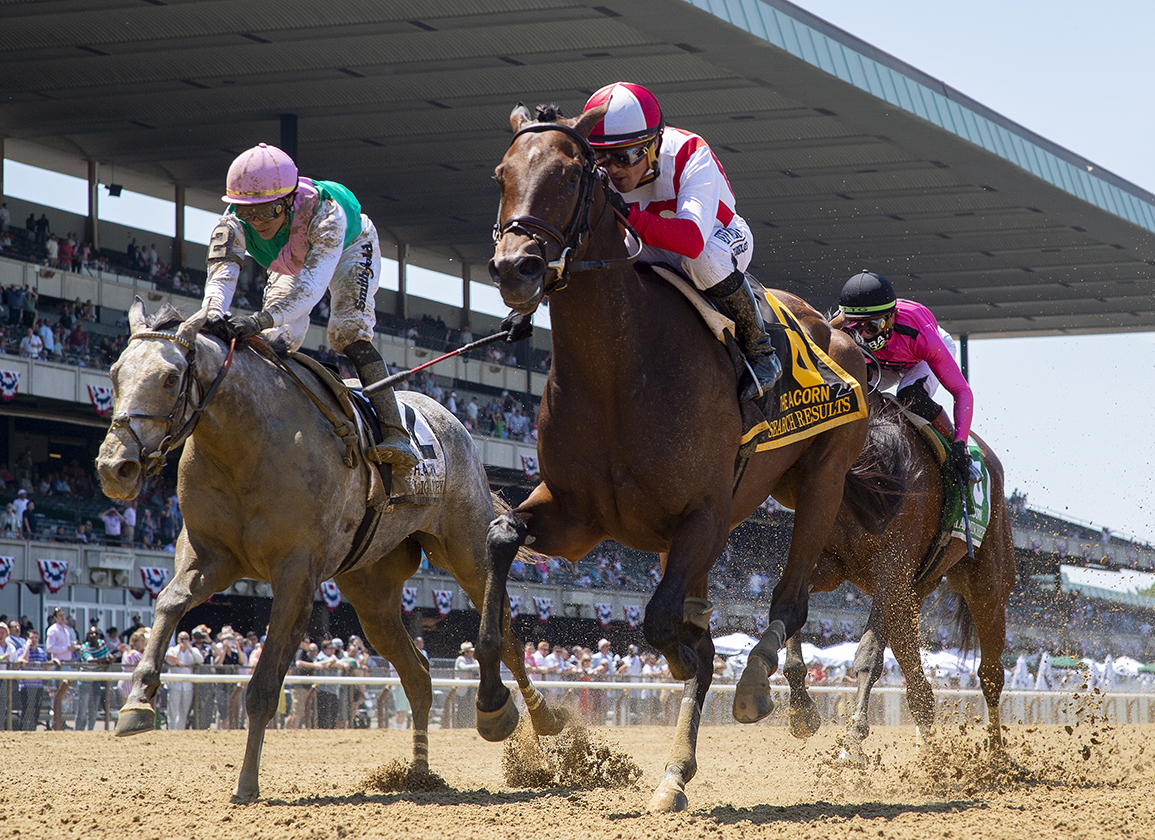 Search Results (Flatter) bounced back from a narrow defeat in the GI Longines Kentucky Oaks to handle a stellar field of fillies in the prestigious GI Acorn S. Saturday at Belmont Park.

Well supported by the bettors with what appeared to be a narrow figure edge on her other accomplished foes, the dark bay broke alertly but was reined in by Javier Castellano to stalk from fourth of the five out wide as last year's local GI Frizette S. winner and second choice Dayoutoftheoffice (Into Mischief) cruised to the fore. Dayoutoftheoffice clicked off splits of :23.50 and :47.23 while seemingly well within herself. Search Results revved up with a three-wide bid along the turn, and while the pacesetter fought on to midstretch, Search Results wore her down despite traveling on her wrong lead. A new challenge came from Obligatory (Curlin), who was rocketing home from the back of the pack and who had defeated Dayoutoftheoffice in the GII Eight Belles S. last time, but Search Results had built up enough of a cushion to hang on. Eight Belles third Make Mischief (Into Mischief) nosed out Dayoutoftheoffice for third, with GII Fair Grounds Oaks heroine Travel Column (Frosted) disappointing for the second straight time.

“I was at the right place at the right time,” said Castellano, who picked up the mount on Search Results from the sidelined Irad Ortiz, Jr. “I was very fortunate… I'm thankful to Chad Brown for the opportunity to ride this horse; we've had a lot of success in the past. I'm sorry for Irad Ortiz that he got hurt, but it gave me the opportunity to ride.”

Castellano had ridden Search Results in the Mar. 6 Busher.

“The pace wasn't fast [Saturday] but she was right there,” the Hall of Famer said. “That's the good thing about her. You can put her where you want. You can be a little closer to the pace or you can be a little bit off the pace. I don't think she's a difficult horse to manage. She's very easy and straightforward. I'm just lucky I had the opportunity to ride her.”

A four-length debut winner sprinting at Gulfstream in January, Search Results resurfaced at Aqueduct for the Busher Invitational S., seeing out the mile that day before handling nine panels with aplomb in the Apr. 3 GIII Gazelle S. She was the proverbial “too good to lose” in the Oaks Apr. 30, dropping a neck decision to until then fellow unbeaten 'TDN Rising Star' Malathaat (Curlin).

“I'm just so proud of her to come back in five weeks after a real dog fight with Malathaat. To bounce right back and lay it on the line again, this filly has so much talent and so much heart. She's a very rare kind of horse to have, and we're so lucky to have her.”

Search Results is the fifth Grade I winner Flatter, and one of 21 graded winners for the Claiborne stalwart, who was also represented on the Kentucky Oaks trail by GI Central Bank Ashland S. runner-up Pass the Champagne. Candy Ride (Arg) is just beginning to hit his stride as a broodmare sire, and is the now the dam sire of four top-level winners (including one in the Southern Hemisphere).

Dam Co Cola was second in a trio of six-furlong stakes, including the 2014 GIII Old Hat S. for trainer Todd Pletcher. Her 2-year-old full-brother to Search Results was a $100,000 KEESEP yearling turned $625,000 OBS April buy by Lauren Carlisle and MyRacehorse after breezing in :10 1/5. Co Cola subsequently aborted to Flatter's son West Coast, but produced a Nyquist colt this February and is back in foal to Flatter.