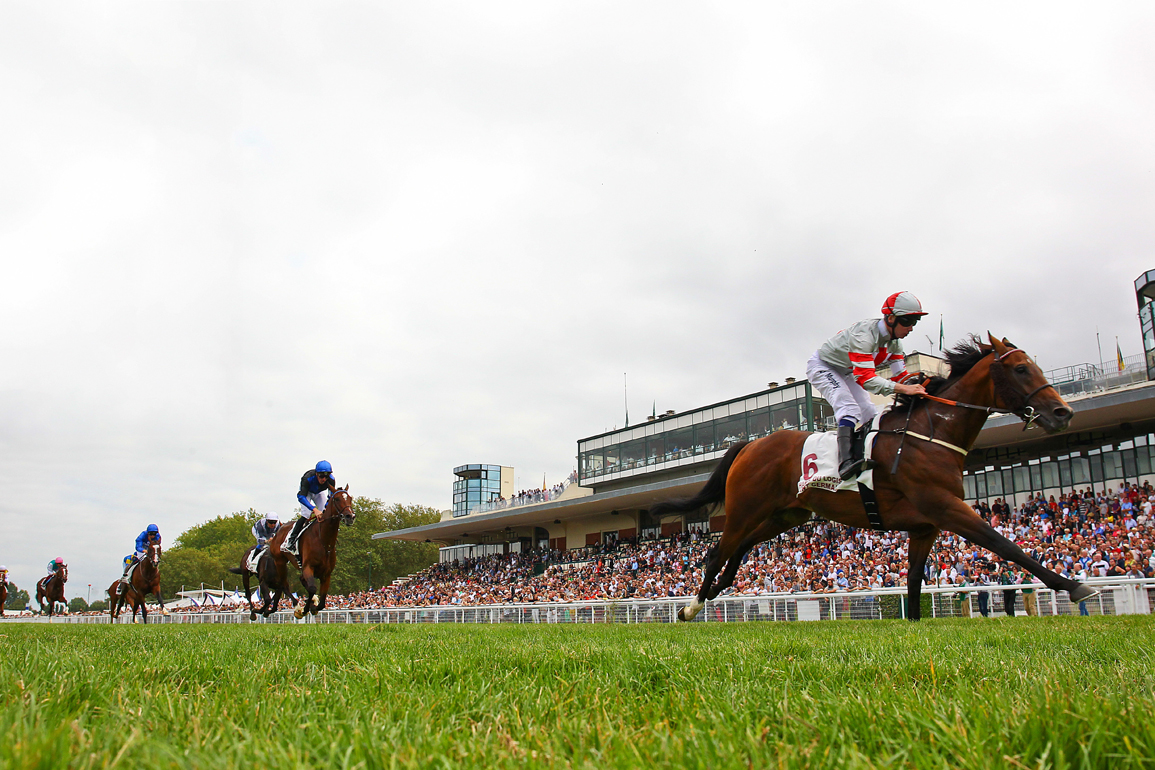 Just as Eminent (Ire) (Frankel {GB}) did 12 months ago, Neil Jones's Knight To Behold (Ire) (Sea the Stars {Ire}) came from Britain as the underdog for Deauville's G2 Prix Guillaume d'Ornano and led all the way to run away with Wednesday's feature under a masterful ride. Well beaten in both the G1 English and Irish Derbys, the 23-1 shot was always happy bowling along in isolation under Oisin Murphy and as he had in the May 12 Listed Lingfield Derby Trial kicked off the front to dominate. At the line, there was four lengths to spare over Patascoy (Fr) (Wootton Bassett {GB}), with the returning G1 Prix du Jockey Club hero Study of Man (Ire) (Deep Impact {Jpn}) only third as the 4-5 favourite, two lengths further behind. “We're so pleased because he's a horse we've always thought the world of and while the Derby was a nice dream, it obviously went very wrong,” trainer Harry Dunlop said. “Then after the Irish Derby it was pretty clear that he wasn't staying a mile and a half in that company, so we wanted to bring him back to 10 furlongs and Mr Jones was keen to keep him against three-year-olds. That meant taking on the French Derby winner, but we were able to just let him roll along in front–I put cheekpieces on just to help him concentrate. It looks like we've got back the horse we always felt he was, he was impressive.”

This was not the first time that Knight To Behold had dominated from the front, with a ready defeat of Kew Gardens (Ire) (Galileo {Ire}) in the Lingfield Derby Trial preceding his effort in the June 2 G1 Epsom Derby, where he lost any meaningful chance when taken on for the lead by that rival. Fading to be 11th there, he finished in the same position under more patient tactics in the Irish equivalent at The Curragh four weeks later but was back in the groove here. Frankie Dettori, who had ridden him on the latter occasion, was wise to his ability and tried to stay close under fellow British raider Crossed Baton (GB) (Dansili {GB}), but the French jockeys were less respectful and waited and waited in behind. That was a fatal error, as when Knight To Behold cut loose off the home bend as Eminent had in last year's edition he was quickly beyond recall. Study of Man, who had travelled like he was rusty throughout, made up some ground but was always on the back foot and ultimately finished up disappointing.

“I think we'll keep him at 10 furlongs for now, but he's got no fancy entries as we didn't know where we were going with him,” Dunlop continued. “Most of the big races are now closed, so I'll talk to Mr Jones. It might be the [G2] Prix Dollar [at ParisLongchamp Oct. 6] or something, but it's just nice to get him back on track.” Pascal Bary was looking at Study of Man's options after his heavy defeat and said, “It looks like he took too long to get into the rhythm of the race and was slightly caught for speed. Also, a mile and a quarter is probably a little too sharp for him now and he might need further. The plan was to go to the Irish Champion after this, but I need now to discuss it with Maria Niarchos and Alan Cooper.”