Sea the Stars' Lavender's Blue On Top In The Celebration Mile 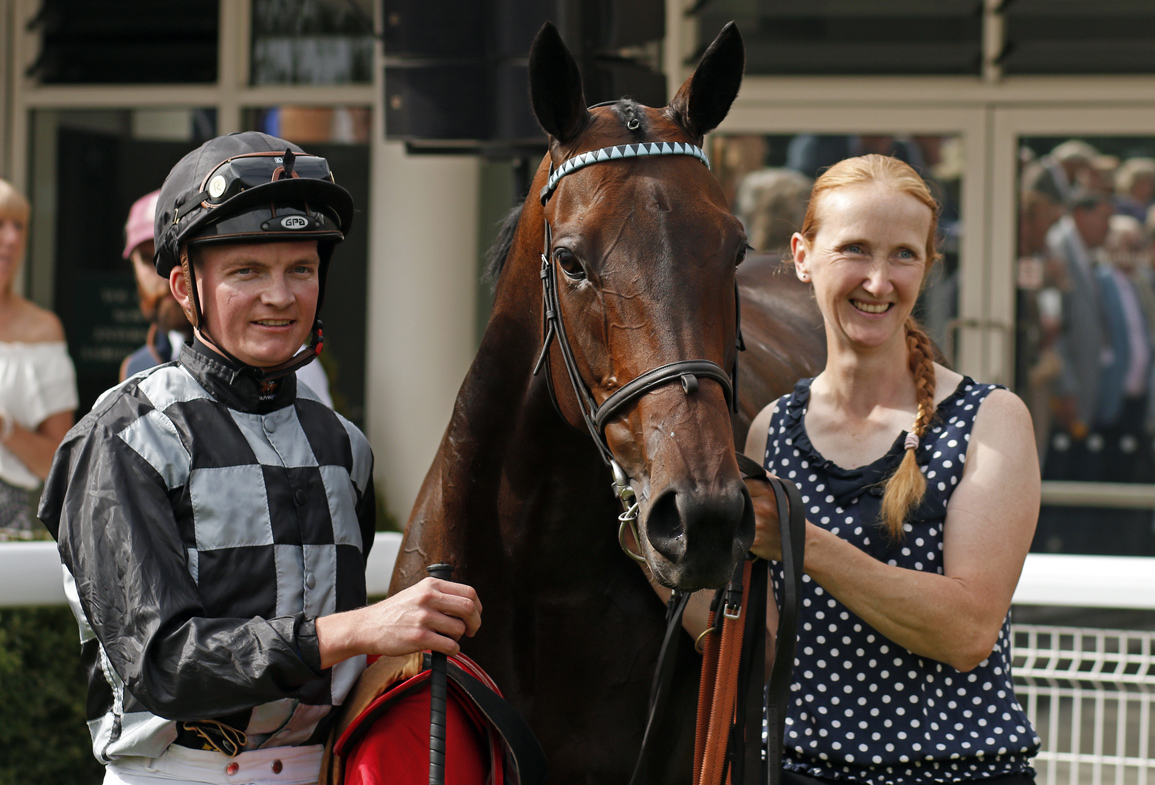 Becoming the fifth subsequent pattern-race winner to emerge from the G1 Falmouth S., Benny Andersson's homebred Lavender's Blue (Ire) (Sea the Stars {Ire}) who was only eighth in that July 9 Newmarket feature took a step forward to register a career-best success in Saturday's G2 tote Celebration Mile at Goodwood. Trapped three-wide early under restraint from Rob Hornby, the 20-1 shot had the ideal target horse to follow in Benbatl (GB) (Dubawi {Ire}), who had fly-jumped leaving the stalls and surrendered valuable ground there. Granting first run to that 9-4 favourite approaching the final furlong, the Amanda Perrett-trained bay delivered a withering run down the outer to deny that rival in the last stride and prevail by a short head as the long-time leader Pogo (Ire) (Zebedee {GB}) finished two lengths away in third. “She's really deserved that, as we've set her some stiff tasks the last few times,” the winning trainer said. “The fillies' division is really strong this year and that is why we weren't too worried about taking on the opposite sex today.”

Lavender's Blue had looked to connections to be a burgeoning middle-distance performer in her 3-year-old days, but it was not until she came back to this trip that she proved most effective when taking the G3 Atalanta S. at Sandown in August 2019. Fourth in Newmarket's G1 Sun Chariot S. on her only other start that term, the bay's six outings in 2020 yielded little in the way of progression with a third on her defence of her Atalanta title her best effort. Coming back at five to win the Listed Snowdrop Fillies' S. on Kempton's Polytrack Apr. 5, she was third behind Lady Bowthorpe (GB) (Nathaniel {Ire}) and Queen Power (Ire) (Shamardal) and in front of Indie Angel (Ire) (Dark Angel {Ire}) in the G2 Dahlia S. over nine furlongs at Newmarket May 2 before running fifth behind all three in Royal Ascot's G2 Duke of Cambridge S. June 16.

Amanda Perrett deserves credit for her foresight after Lavender's Blue's Falmouth eclipse, switching from the current red-hot fillies and mares' division at a track which she had visited only once when sixth in last year's G1 Nassau S. trying a mile and a quarter that probably stretches her stamina. “Her group 2 win has been long overdue, so I'm just really glad to get it done today,” she said. “Her form is very strong. She's very consistent, she loves top of the ground and if you look at her three-year-old form she was mixing it with Oaks fillies so she deserved a big one. We just need to finish it off now by winning the [Oct. 2 G1] Sun Chariot, which is where she'll go next at Newmarket and we'll hope for fast ground. I'm delighted for Mr Andersson. You couldn't wish to train for a better man and it's great for him, especially as he loves Goodwood.”

Godolphin's G1 Dubai Turf, G1 Grosser Dallmayr Preis and G1 Ladbrokes S. hero Benbatl was far from disappointing on his seasonal bow and trainer Saeed bin Suroor said, “Benbatl reared in the stalls, which caused him to miss the break but he still ran a big race to finish a close second. We will keep the options open for Champions Day at Ascot, whether we go for the G1 Queen Elizabeth II Stakes or the G1 Champion Stakes, and he could run in the [Sept. 24] G2 Joel Stakes at Newmarket again beforehand.”

Lavender's Blue is the second foal out of Beatrice Aurore (Ire) (Danehill Dancer {Ire}), who captured the G3 Prix Chloe and this track's Listed Height of Fashion S. and was runner-up in the G1 Premio Lydia Tesio and placed in three other group 3 contests in Britain, Ireland and Norway. The second dam is the Listed Prix Belle de Nuit winner Mondschein (GB) (Rainbow Quest), who is full-sister to the G3 Royal Whip S. scorer Jahafil (GB) and kin to the dam of the G2 Prix Guillaume d'Ornano winner and G1 Tattersalls Gold Cup runner-up Highdown (Ire) (Selkirk). Beatrice Aurore also has a 2-year-old filly by Australia (GB) and a 2021 full-sister to Lavender's Blue.