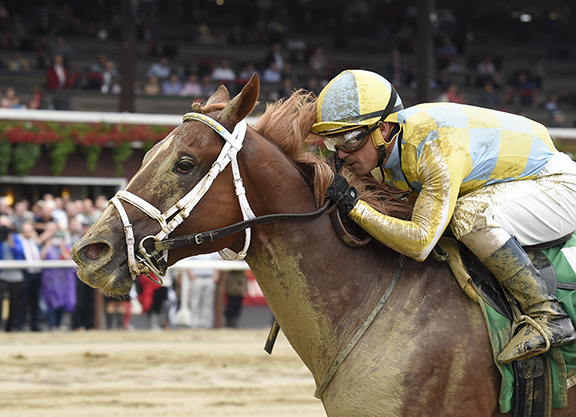 Flameaway was a debut winner by daylight at odds-on over the Woodbine Tapeta May 28, and handled this surface switch convincingly, even if it wasn't the surface his connections had been looking for. Slowest to start, he was scrubbed on to sit fifth of six while saving ground into the bend. Checked sharply behind foes approaching the stretch, he re-broke professionally in midstretch and split rivals determinedly to open up and safely hold off favored El Dulce. Dial One, well back early, made an eye-catching run in the stretch while very far out on the muddy track.

Trainer Mark Casse added, “He made a move at about the five-sixteenths pole and Javier got stopped for about 100 yards. He's a big horse, and he [Castellano] said it took him a little while to get his momentum going again, and that's what you saw when he finished. He's a little slow to begin.”

Flameaway is the 85th black-type winner for his late sire.

While Casse admitted that while his plans for Flameaway involved a move to the turf, the colt could remain on the dirt following Friday's effort.

Vulcan Rose is a half to GSW Essential Edge (Storm Cat), as well as to the dam of stakes winner and 2017 Queen's Plate runner-up Tiz a Slam (Tiznow). Flameaway's third dam is Irish and English Group winner Flame of Tara (Ire) (Artaius), who produced 1990 G1 Epsom Oaks and G1 One Thousand Guineas heroine Salsabil (Ire) (Sadler's Wells), G1 St. James's Palace S. winner Marju (Ire) (Last Tycoon {Ire}), etc. Vulcan Rose has a yearling colt by Victor's Cry and a weanling colt by Flat Out. She was bred back to Tiznow.