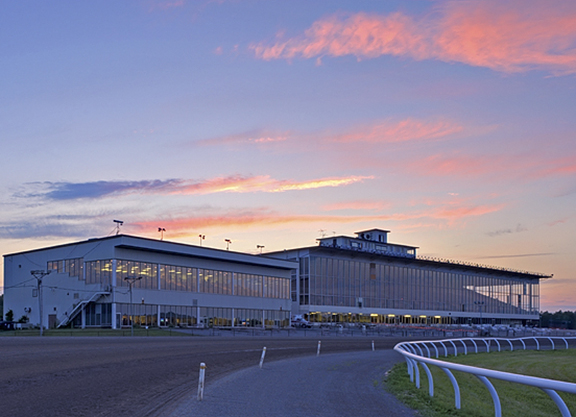 Another link to New England's horse racing history will go dark this month, soon to be razed for development: Scarborough Downs on the southern Maine seacoast confirmed it will host its final Standardbred program Nov. 28, ending 70 years of horse racing at the venue that first opened as a one-mile Thoroughbred track in 1950.

The Portland Press Herald first reported the news, although the track's demise had been signaled by a purchase two years ago by developers who have been rebuilding over adjacent property while letting the harness operators lease the track for racing and simulcasting.

The Press Herald reported the 2018 purchase price as $6.7 million. For comparison, the original ownership that founded Scarborough Downs paid $600 for marshland that the town of Scarborough had no other use for back in 1950.

“A scenic background of towering pine, spruce and fir make the track a real beauty spot, and while a few rough edges will have to be polished before it is completed, Scarborough Downs, with its natural beauty, seems destined to become one of New England's popular tracks,” the Boston Globe reported on the eve of the grand opening.

Scarborough was a pioneer in Thoroughbred night racing in New England right from its first season, trying to capitalize on giving beach tourists something to do after dark on summer evenings.

But the track struggled to attract meaningful handle right from the start, and Maine's strong Standardbred interests soon took the track to court to try and ban Thoroughbreds from competing under the lights against the evening harness meets (it briefly worked, but the ruling was eventually overturned). The track added Standardbreds in 1969, ran dual breeds at different meets, then ceased Thoroughbred racing on Labor Day, 1972.

The harness oval was downsized from a mile to a half-mile in 1973, although the Thoroughbred track is still visible in outline. Barn fires in 1980 and 1982 killed 14 horses, and the original clubhouse was consumed in a 1983 blaze. The record attendance for the Maine track was on June 29, 1980, when a crowd of 9,133 showed up to get autographs from Lou Ferrigno, the actor who portrayed “The Incredible Hulk.”

The Press Herald reported Thursday that “After Scarborough Downs stopped night racing in 2007 because the light posts had to be removed after the hub rail was removed for safety reasons, the crowds thinned even more. The grandstand fell into disrepair and was eventually closed to fans and the entire facility had a rundown look.”

Although harness racing in Maine is not high profile, it is rich in tradition (a Grand Circuit attraction on “kite” tracks in the early 20th Century) and it is still comprised of nine stops: Bangor Raceway (a racino), plus August-through-October county fair meets at Northern Maine Fair, Topsham, Skowhegan, Union, Windsor, Farmington, Cumberland, and Fryeburg.

The Press Herald reported that “Members of the harness racing community said the closing of Scarborough Downs could lead to a brighter future for the harness racing industry, mentioning that an unspecified group has begun plans to build a harness racing facility elsewhere in southern Maine, an important part of the state for harness racing because of its population base.”