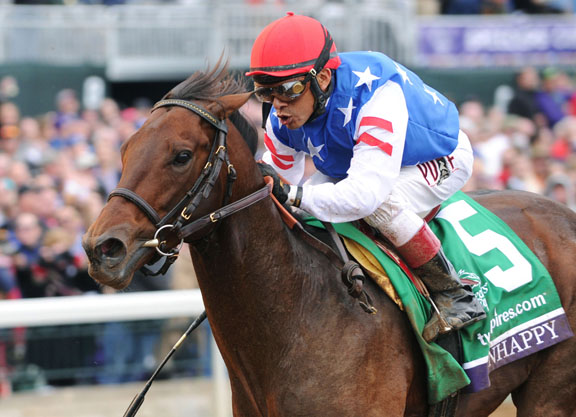 HALF TO RUNHAPPY BEGINS HIS CAREER

8th-GP, $50K, Msw, 3yo, 1 1/16mT, post time: 3:42 p.m. EDT
PRAYER BOOK (Uncle Mo) gets the new year and his career started for seven-time Eclipse-winning trainer Todd Pletcher. Stonestreet bred the half-brother to champion and triple Grade I winner Runhappy (Super Saver), then sold him for a $500,000 hammer price at Keeneland September and stayed in to race the now 3-year-old in partnership with Harrell Ventures LLC. Stonestreet had purchased his dam for $1.6 million in 2015 just after Runhappy won the GI Breeders' Cup Sprint. Prayer Book will have to get by Steadfast Stable's Listowel Lad (Sky Mesa), another firster who is out of a GI Queen Elizabeth II Challenge Cup S. winner in Bit of Whimsy (Distorted Humor). The mare has already thrown two black-type winners from four starters, including GSW & GISP Caroline Thomas (Giant's Causeway). Listowel Lad debuts for Barclay Tagg, who just lost stable star Tiz the Law (Constitution) to retirement. Flanagan Racing's Please the Pharoah (American Pharoah) gets another shot here after a no-impact debut Nov. 14. The $320,000 OBS March buy (:21 1/5) is a half to English champion Certify (Elusive Quality) and to additional Grade I winner Cry and Catch Me (Street Cry {Ire}).