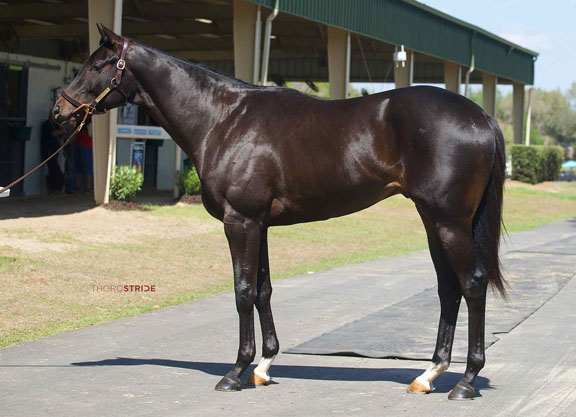 A number of freshly minted sophomores who were pricey sales horses kick off their careers in this six-panel maiden, led by Tom Durant's RUN CLASSIC (Runhappy), a $475,000 OBS purchase  (:20 3/5) and the highest-priced juvenile to sell by his sire. Trainer Bret Calhoun sends him to post, where he will have to face former $650,000 Fasig-Tipton Saratoga yearling Constituency (Candy Ride {Arg}). The CHC Inc. and WinStar Farm runner, who is conditioned by Dallas Stewart, is out of stakes-placed Zermatt (Tiznow) from the family of Breeders' Cup champ and MGISW Rushing Fall (More Than Ready). They'll both have to get by Susan Moulton's Gunner Paul (Exaggerator), a $150,000 OBS buy (:10 2/5), whose year older half-sister, Merneith (American Pharoah), ended 2020 with a listed stakes win at Keeneland on Breeders' Cup Saturday before a third in the GI La Brea S. at Santa Anita. Gunner Paul hails from the barn of Wayne Catalano. On the also-eligible list is OXO Equine's Koolhaus (Nyquist), a $600,000 Keeneland November weanling whose dam is a half-sister to champion Lady Eli (Divine Park) and MGSW Bizzy Caroline (Afleet Alex). He's one of two Brad Cox entrants in the field. TJCIS PPs

SOPHOMORES SLUG IT OUT IN TWO-TURN ALLOWANCE

About 2 1/2 hours prior to the running of the GIII Lecomte S., a field of 10 3-year-olds take in this allowance test that could toss up a starter or two for races like the GII Risen Star S. and GII Louisiana Derby over the next couple of months. MANOR HOUSE (Upstart) was one of two in the field whose connections toyed with the idea of the Lecomte before setting for this obviously softer spot. The Florida-bred has one previous start to his credit, a 12 1/4-length, gate-to-wire romp going Laurel's one-turn mile Dec. 12, good for a 76 Beyer Speed Figure. The Newtown Anner colorbearer looks to have held his form with a pair of strong local breezes on display. Angkor (Anchor Down) was a well-backed graduate first time out, scoring by four lengths at Churchill Nov. 1, and got valuable two-turn experience when missing by a dirty nostril in Louisville Nov. 22. Gagetown (Exaggerator), a two-length debut winner sprinting at Churchill in November, stretches out off a solid runner-up effort behind the talented Quick Tempo (Tapizar) in the Dec. 19 Sugar Bowl S., while Beep Beep (Tapizar), who was also cross-entered in the Lecomte, tries a distance of ground, having raced away to a 3 1/2-length victory on his seven-furlong Churchill debut Nov. 29. TJCIS PPs