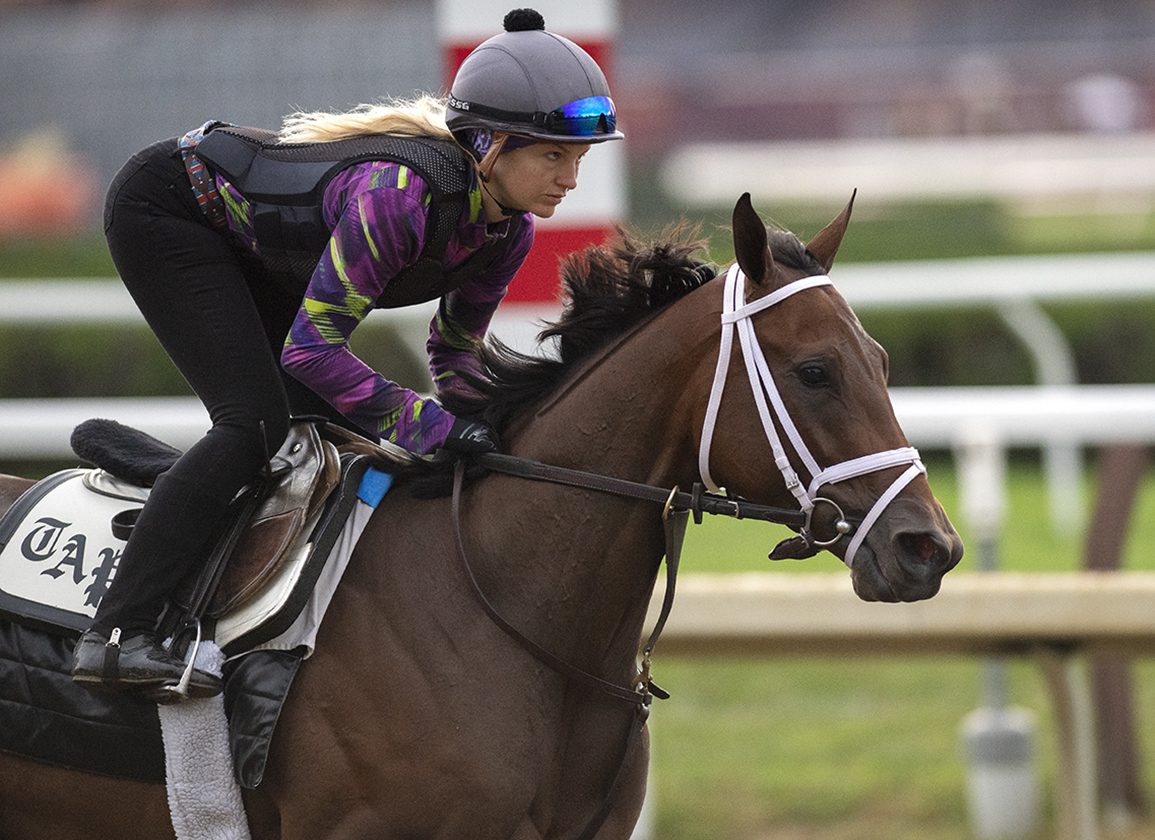 There is plenty to play for in Saturday's 142nd running of the $600,000 GI Alabama S. at Saratoga, where Nest (Curlin) and Secret Oath (Arrogate) face one another for the third time head-to-head–each with one victory to their credit–with divisional supremacy awaiting the winner.

An 8 1/4-length tour-de-force tally in Keeneland's GI Central Bank Ashland S. accorded Nest the role of favoritism in the GI Longines Kentucky Oaks, but she was no match for the somewhat forgotten Secret Oath, dropping a two-length decision. A meritorious second to stablemate Mo Donegal (Uncle Mo) in the GI Belmont S., the $350,000 Keeneland September grad reversed the Oaks form with a 12 1/4-length thumping of Secret Oath in the GI CCA Oaks July 23, good for a 104 Beyer Speed Figure that is a half-dozen points stronger than anything her six rivals has earned and nine more than Secret Oath's top. A GI Runhappy Travers S. start was an option next weekend, but she sticks with a path of lesser resistance for the Alabama.

“Whenever you're running four weeks off a huge effort like that, you're always concerned about if you're running back too soon,” said trainer Todd Pletcher, who won his third Alabama with 'TDN Rising Star' Malathaat (Curlin) last year. “But, in her case, she's done so well since the race there's no reason not to.”

Wayne Lukas, who won the Alabama twice in the 1980s with Life's Magic in 1984 and with Oaks winner Open Mind five years later, looks to equal his former pupil. Secret Oath's second clash of the season with the boys in the GI Preakness S. resulted in a non-threatening fourth and she figures to strip fitter off the CCA Oaks, her first start in 63 days.

“She's really had a good month since that debacle in the [CCA Oaks],” Lukas said. “In fact, I feel like she's better now than any time I've had her. She's really flourished here at Saratoga. [Jockey] Luis [Saez] has worked her three times since that race so he's getting more familiar every day with her, too. So, that should help us as much as anything. We're anxious to run her.”

Gainesway Stable's Spendarella (Karakontie {Jpn}) took her career record to three wins from as many starts with a convincing 1 3/4-length success in the GII Appalachian S. at Keeneland in April and, with trainer Graham Motion unafraid to tackle the deepest of deep waters, took that undefeated mark into the G1 Coronation S. at Royal Ascot June 17. The $220,000 Keeneland September purchase had the misfortune of running into her fellow flawless rival Inspiral (GB) (Frankel {GB}), who scored by 4 3/4 lengths first off the layoff and has since defeated the boys in the G1 Prix Jacques Le Marois at Deauville.

But Saturday's GI Del Mar Oaks figures something other than a walk in the park for Spendarella, who faces a fresh challenge from Euro import Txope (Fr) (Siyouni {Fr}). The bay, previously trained by Philippe Decouz, was stakes-placed in France earlier this season on the synthetic and on the turf and was last seen posting a mild upset when proving 3/4 of a length too strong in the G2 German 1000 Guineas at Duesseldorf June 12. The bay most recently topped the Arqana Summer Mixed Sale on a bid of €1.2 million from the BBA Ireland on behalf of Yulong Investments. She makes her U.S. debut for the John Sadler barn and can be the fly in the favorite's ointment.

Spendarella in town and cruising around Del Mar on Thursday morning in preparation for Saturday's G1 Del Mar Oaks. Who is your pick?

With The Moonlight Backs Up For Lake Placid

Godolphin's With The Moonlight (Ire) (Frankel {GB}) makes her third start in the last six weeks as the expected favorite in the GII Lake Placid S. back at the Spa. After failing to see out the 12-furlong distance of the G1 Cazoo Oaks June 3, the homebred completed a Frankel exacta behind McKulick (GB) in the GI Belmont Oaks Invitational July 9 but turned the tables on that foe last time in the GIII Saratoga Oaks Invitational. The latter is missing this time around, but the Chad Brown barn is represented by a quartet–each lined up next to the other–including GIII Lake George S. one-two finishers Dolce Zel (Fr) (Zelzal {Fr}, gate 5) and Eminent Victor (Mr. Z, post three); Consumer Spending (More Than Ready, post four), winner of the GII Wonder Again S. and third in the Belmont Oaks; and 'TDN Rising Star' Haughty (Empire Maker, gate six).

In non-graded stakes action Saturday, Grade I winner Rattle N Roll (Connect), who lost all chance at the start of the GIII Indiana Derby July 9, looks to return to winning ways in the $250,000 St. Louis Derby at FanDuel Racing (results in Monday's TDN), while 2-year-old males and females prep for next month's GI Pattison Summer S. and GI Natalma S., respectively, in the Soaring Free S. and Catch a Glimpse S. at Woodbine.