Saratoga: Graveyard of Champions or Birthplace? 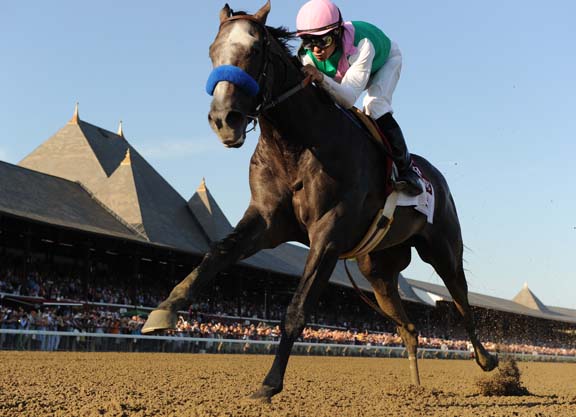 SARATOGA SPRINGS, N.Y.–Saratoga is arguably the most highly regarded racing venue in the country. Its prestige, history and level of competition are just about unmatched. Part of that history, however, is a reputation as “The Graveyard of Champions.” One of the most famous examples of that is the mighty Secretariat's loss to Onion in the 1973 Whitney S., which was a Grade II at the time. More recently, Triple Crown winner American Pharoah (Pioneerof the Nile)'s perfect sophomore season came to a halt at the Spa when Keen Ice (Curlin) surged past the champion late in the 2015 GI Travers S.

However, an argument can be made that Saratoga has made as many champions as it has claimed, if not more. This has been especially true in the last five years with three of the last five Travers winners going on to be named champion 3-year-old and two of the last five GI H. Allens Jerkens Memorial S. (formerly known as the King's Bishop) heros earning the Eclipse as top sprinter.

“To put that in perspective, what you have to realize is, the media and a lot of the fan base have very short memories,” said Hall of Famer D. Wayne Lukas. “So, what you do in the fall usually has a little more punch than what you do in the spring, unless you are Justify (Scat Daddy) and win all of [the Triple Crown races]. John Nerud, the Hall of Famer, always said, 'Championships are made in the fall. They aren't made in the spring.' Well if you are going to make a champion, you have to do it here at Saratoga because this is the premiere meet where the world is watching.”

Bob Baffert expressed similar sentiments, saying, “The thing about Saratoga is everybody is watching, the whole industry. This is where it happens. If you are going to showcase a horse, it is important to get a win on the East Coast, but if you can get it in Saratoga, it means more because it is probably the biggest platform to showcase a horse. All of these races have so much history and have been won by all the greats.”

The Hall of Famer continued, “This is it. This is the top! That is why I shoot for Saratoga in the summer. It is a bigger venue than anywhere else. It is a huge accomplishment if you can win a stake up here.”

Lukas campaigned the first of the aforementioned three recent Travers winners to go on to win the Eclipse Award in the regally bred Will Take Charge (Unbridled's Song), who won the 2013 edition. Victor of that year's GII Rebel S., the hulking chestnut was well-beaten in all three Triple Crown races, but began to come into his own at Saratoga, starting with a runner-up effort to that year's GI Belmont S. winner Palace Malice (Curlin) in the GII Jim Dandy S.

Will Take Charge followed that effort with a thrilling late rally to win the Travers, stamping him as a major player for the second half of the season. He went on to win the GII Pennsylvania Derby and just missed behind his elder Mucho Macho Man (Macho Uno) in that year's GI Breeders' Cup Classic, sewing up the divisional championship.

“He was close in the Jim Dandy, but the Travers definitely cemented him as one to watch,” Lukas said outside of his perfectly manicured barn at the back of the Oklahoma training track. “Of course, we threw one in there at Parx in the Pennsylvania Derby and the Breeders' Cup, where he lost by only an inch.”

This year's champion 3-year-old male award already belongs to Triple Crown winner Justify (Scat Daddy) as far as most people, including Lukas, are concerned, but the Travers could be an indicator of which sophomore will be a major player in the GI Breeders' Cup Classic. The famed conditioner hopes he has a sophomore fitting that billing in Travers contender Bravazo (Awesome Again), who has been knocking at the door of a top-level victory with seconds in both the GI Haskell S. and GI Preakness S.

“We want to move forward,” Lukas said. “We are more interested in a Grade I on his resume, he doesn't have that. We are interested in picking up a nice check and a win of this magnitude. I think as far as the Eclipse goes, you can chisel that trophy already. So, we are sitting here trying to do something economically and he is a stud horse, so we are trying to enhance his stud career. There are going to be two others on the ballot [in addition to Justify] to make it official.”

“I am hoping I have Horse of the Year too,” quipped Baffert in reference to Justify. Adding, “If you can win here it is huge. It is a springboard to the Breeders' Cup. You've got all the horses still running and still at the top of their game, other than Justify. He is one of the only ones not here. When it comes to the end of the year voting, I think if you see Saratoga, it gets a lot more weight.”

Baffert is responsible for the last two Travers winners, Arrogate (Unbridled's Song) and West Coast (Flatter), both of whom went on to be named champion 3-year-old male. Saratoga was also the coming out party for both of these colts, who had previously flashed their talent, but not at the highest level or on the biggest stage, as Baffert called the Spa.

“They have to be really good horses to win it,” the conditioner said. “I did it [the first time] with Point Given (Thunder Gulch) [in 2001] after he won the Haskell. It takes a really special horse to win those two races. He is one that could have won the Triple Crown.”

He continued, “I like to have [a Travers runner] if I know I can win it. We were looking forward to bringing Justify up here. This town would have been crazy. When I brought Pharoah up here it was crazy. Everyone wanted to see him.”

Baffert is without a Travers runner this year, but he does have the ultra-talented Personal Ensign S.-bound Abel Tasman (Quality Road).

“I could have run Abel Tasman at Del Mar, but it wasn't sexy enough,” Baffert said with a laugh. “The Personal Ensign is huge. There are some good fillies in there. Basically this is the Breeders' Cup.”

He added, “I just love her. She is the barn favorite. She is so sweet. She reminds me of Pharoah. She is a big, long, beautiful filly and she has those ears like Pharoah. One thing about her is she shows up. She is pretty consistent. She is one of the best fillies I have ever trained. She is incredible.”

“I think if your horse is sound and everything it is hard to pass up races of this importance with these purses,” Lukas said. “Saratoga has the ability to give you a barometer as to whether you belong in the Breeders' Cup.”

The Coach added, “Obviously, management has done some research and figured out maybe this is a better way to go than having them all spread out. I've talked to racing secretaries and that seems to be the trend around the country. It is probably based on handle and not so much on attendance, because attendance is going to be good anyway, but evidently the handle, nationwide with simulcasting, is affected by that many good races.”

Some conditioners are now using Saratoga, especially the Travers day races, as a springboard directly to the Breeders' Cup. Baffert trained both Arrogate and 2016 Allen Jerkens winner Drefong (Gio Ponti) right up to wins at the World Championships after breakout victories at Saratoga. Drefong, like 2015 Jerkens and BC Sprint winner Runhappy (Super Saver), went on to be named that year's top sprinter.

“I think it is tremendous,” Stewart said. “They are great races with great horses and very challenging. The favorites don't always win here. Next week is the [GI] Woodward and we are using that to get to the [GI] Breeders' Cup Classic with Seeking the Soul (Perfect Soul {Ire}).”

Last year's Classic winner and Horse of the Year Gun Runner (Candy Ride {Arg}) prepped for his Championship score with a victory in the Woodward. But, Stewart cautioned that this move is not for everyone.

Stewart summed it up, saying, “You have to win. You cant be second.”