Saratoga Flashback: When King Angel Was a Pauper 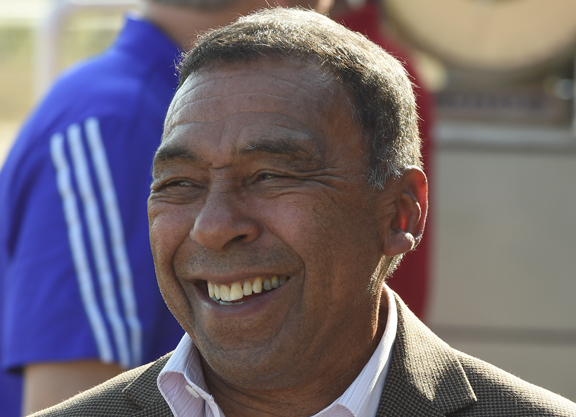 He has set Saratoga records that will likely never be broken. Fourteen riding titles, 11 in a row. Angel Cordero, Jr. enjoyed the best times of his career here, but also the worst. Those were the years when he literally didn't have enough money to eat and slept on sofas and in cars. They are years few realize Cordero ever endured and years and he would just as soon forget. The story of Cordero is one not just of greatness, but also of perseverance.

He came to Saratoga for the first time in 1962 and had his first-ever mount at the iconic upstate New York racetrack Aug. 3. He finished second. It would be his best showing during a meet in which he had all of seven mounts and did not win race.

“It was terrible,” Cordero recalled. “I came to this country for the first time in '62 and I didn't do any good anywhere, so I was hungry. I didn't have money to pay rent, so I didn't last too long.”

As badly as he wanted to make it in the U.S., Cordero found it impossible to make a decent living and returned to his safety net, his native Puerto Rico. There, he was among the top riders.

He did not return to Saratoga until 1965, the year he won his first race there. He did much better than he did in 1962, winning 11 races. But Cordero was still struggling financially.

“It was tough because I wasn't working for money in the morning,” he said. “I was just working trying to get on horses, but I wasn't getting on the horses in the afternoon. I was working for free and I didn't have any money to pay rent.”

Cordero was shaken by his lack of success in the U.S., but always believed he had the talent to become a top rider here. He had grown tired of sleeping on couches and in cars and vowed to his friends that someday his annual accommodations in Saratoga would no longer be an embarrassment, but rather a sign that he had made it.

“Being that I had suffered so much here, I got it in my mind that I would get a house with a swimming pool,” Cordero said. “They would make fun of me, they would say, 'But you don't even know how to swim.' I said, 'I know, but I just like watching the water.'”

In time, he had his pool. He won four races on the opening day card in 1967 and never slowed down. That was the year he won his first Saratoga title, notching 36 victories during the 24-day meet. Yet, it was years before he would become such a prolific force in Saratoga that he earned the nickname “The King of Saratoga.” It would take him nine years to win his next Saratoga title.

“In 1967, I was riding for a lot of claiming people,” he said. “I got very lucky that some of the people I was riding for had a really good meet. I was very surprised that I was leading rider. Then I didn't get to be leading rider again until 1976. I used to get dazed every time I came here and it got harder and harder. I never thought I'd do it again. I kept the program from '67 and I would share it with my friends. I wanted everyone to know that I had once been the leading rider in Saratoga.”

In time, 1967 would become little more than a footnote to what may be the greatest winning streak any jockey has ever compiled. Few care who is leading rider at Aqueduct or Belmont, but Saratoga has always been different. It has a mystique that is missing from the two downstate tracks and to win in Saratoga against arguably the best riding colony in the world is a feat worthy of celebration. From 1976 to 1986, at the end of every Saratoga meet there would be only one name on top of the Saratoga jockey standings: Angel Cordero, Jr.

“At the beginning, I wasn't even counting,” he said. “I thought it was so great that I could come from nowhere and start winning in the most important meet in the United States. There was no pressure until they started naming me the King of Saratoga. I had to defend my throne. I was under a lot of pressure and knew I'd be embarrassed if I got beat.”

He overcame injuries–big and small–and suspensions. The odds were against him in 1986. In a March 8 spill, he suffered a fractured tibia and a lacerated liver. He was 43 and did not return to riding until about two weeks before the meet started.

“The doctors told me they didn't think I was going to ride again,” he said. “I came back in the middle of July and rode two horses. I was riding one, two a day and my agent said, 'Get ready, when you get to Saratoga you're going to have to ride the entire card.' I didn't think I could. I had a stomach operation and it was kind of hard for me. I wasn't feeling great and I had to ride all those horses.”

He would win the title, 27-24, over Jose Santos. But Santos was a rising star, a younger Cordero. In 1987, Cordero was healthy and riding in good form. Santos was just better. The streak was over.

He was not done. A resurgent and determined Cordero reclaimed the Saratoga riding titles in 1988 and 1989. His win in 1989 would be his last. He was still competitive, but had been surpassed by younger and talented riders like Chris Antley, Mike Smith and Jerry Bailey.

The Saratoga riding title is now officially named after Cordero.

The last three years it has been won by one of the Ortiz brothers, by Jose in 2017 and 2016 and by Irad in 2015. Both were overnight sensations. It's doubtful that either ever slept in a car in Saratoga. They probably don't know how easy they have had it.