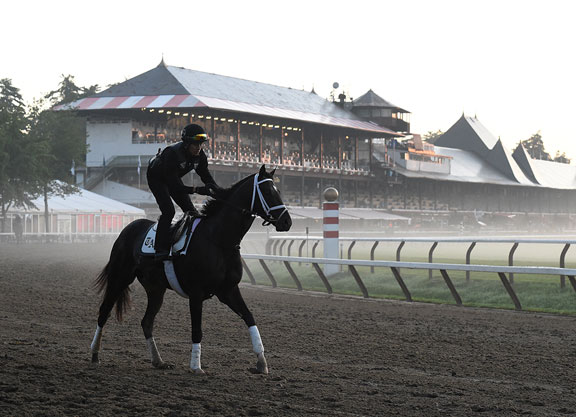 • Trainer Todd Pletcher sent out a trio of GI Travers S. hopefuls for the potential final pre-race breezes Friday morning at Saratoga, just beating a round of rain showers that moved into the area.

Working in the company of last-out Curlin S. winner Outplay (Bernardini), GI Kentucky Derby hero Always Dreaming (Bodemeister) went an easy four furlongs in :49.60 over the Oklahoma training track. It was his third work over the deep surface since his third-place effort behind Good Samaritan (Harlan's Holiday) in the GII Jim Dandy S. July 29. Outwork was officially timed in :49.99.

“We were just looking for a good, positive work,” Pletcher said. “They both ran Jim Dandy weekend and breezed well last week, so we just wanted a good indication that they are maintaining form and doing well. I thought they both finished up extremely well and galloped out strongly; all the things you were hoping to see.

“[Always Dreaming] started off about a length and a half behind. Johnny [Velazquez] was able to bide his time and move up to him. I had him the last quarter in :23 and 2/5, finishing up strongly and galloping out well,” Pletcher added.

Pletcher believes Always Dreaming will be better served by an improved racing surface in the Travers.

“I would expect an improved performance because he's now had a mile and eighth race under his belt,” Pletcher said. “Right now, if the track continues to play the way it is currently, it's definitely tighter than it was Jim Dandy weekend. I would say it's playing at least a second to a second and a half faster at a mile and an eighth than it did at that time. In retrospect, [with] the freshening we gave Always Dreaming between the Preakness and the Jim Dandy, we were expecting the more traditional, livelier Saratoga track.”

Outplay has yet to be committed to the 'Midsummer Derby,' with Pletcher indicating that the GI Pennsylvania Derby Sept. 23 is also under consideration.

“I think Outplay has really progressed,” Pletcher said. “The Curlin was a big win for him; the way he did it was great and the way he's training since then has been even better.”

Tapwrit (Tapit) will be having his first start since his victorious effort in the GI Belmont S. in the Travers and also got his work in prior to the rain. He went a half-mile over the Oklahoma track in :50.24.

“I thought he looked good, Pletcher said. “The track was playing fair, it wasn't super fast but it was in good shape. We got lucky that we missed most of the rain and this track can handle moisture very well.”

• At Gulfstream Park West, GII Lambholm South Fountain of Youth S. hero Gunnevera (Dialed In) drilled five-eighths of a mile in a solid 1:00 flat under the watchful eye of Antonio Sano. He was expected to board a Saratoga-bound van Friday afternoon.

“He was very relaxed, just an easy work,” said Sano of Gunnevera, recent winner of the Tangelo S. at Gulfstream Park. “He doesn't need much, just maintenance. He's ready. We only want to keep him happy. He's really, really good and we're very happy with him. He looks the way he looked before he won the Fountain of Youth.”

• Mind Your Biscuits (Posse) remains on track for the Aug. 26 GI Forego S. after turning in a four-furlong work Friday morning that was timed in :49.70. Regular rider Joel Rosario was aboard for the move.

“I thought he looked great,” said trainer Chad Summers. “It was the work we needed to go forward to the Forego. He galloped out [five furlongs] 1:02 and [six furlongs] in 1:14, which is really good, especially on that Oklahoma track. He really got over it well.

“Joel is happy and I'm happy,” he added. “It was kind of a 'no excuses' work. I wanted to make sure that he'd be into the bit and like Bill Belichick says, 'no excuses.'”