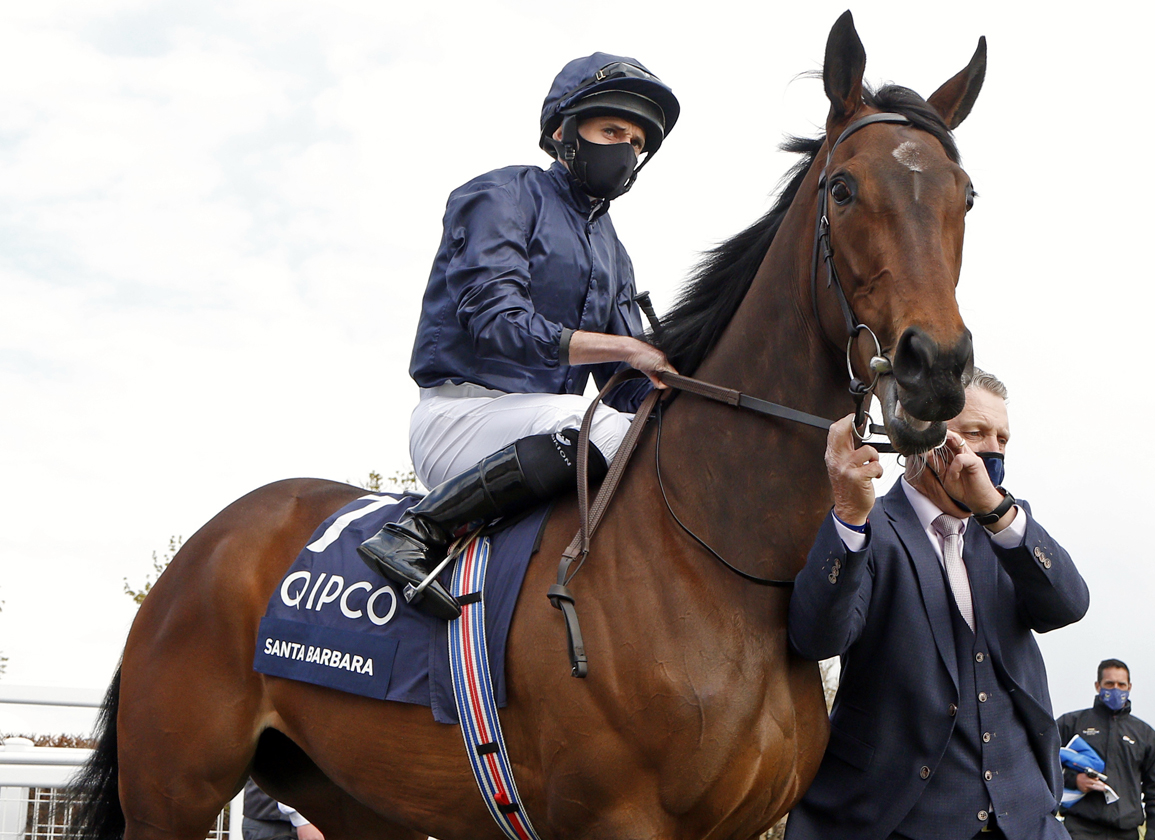 Every year the GI Belmont Oaks and Derby attract an intriguing mix of European invaders and America's best sophomore turf horses and this year is no exception. The Coolmore contingent, Aidan O'Brien and Ryan Moore have a strong shot at taking their second renewal of this race with 'TDN Rising Star' Santa Barbara (Ire) (Camelot {GB}), who enters this race of a narrow runner-up in Group 1 company. A debut winner at the Curragh in September, the bay was fourth in the G1 QIPCO One Thousand Guineas May 2 at Newmarket. A well-beaten fifth in the June 4 G1 Cazoo Oaks at Epsom, Santa Barbara missed by just a neck in the G1 Pretty Polly S. back at the Curragh June 27.

“Every race she's had this year has been a Group 1 and she's been running very well in them,” said O'Brien's traveling assistant T.J. Comerford. “I suppose the ground was bad at Epsom when she ran in the Oaks. Quicker ground suited her better taking on the older fillies [in the Pretty Polly] and she ran well.”

Roger Varian also made the trip across the pond with a strong contender in Nazuna (Ire) (Kodiac {GB}). The bay was second in a Doncaster handicap Sept. 10 and completed the exacta in the G2 Rockfel S. 15 days later. Failing to fire in the GI Breeders' Cup Juvenile Fillies Turf Nov. 6, she was second last out in the Princess Elizabeth S. at Epsom June 5. Varian called on Belmont expert John Velazquez to guide Nazuna here.

Rounding out the European trio is Group 3 winner Cirona (GB) (Maxios {GB}). Following an allowance win with runner-up efforts in the G3 Priz des Reservoirs and Criterium du Languedoc last term, the dark bay opened 2021 with a victory in the G3 Prix de la Grotte in April and missed by a head in the Prix Saint-Allary May 24. She enters off a non-factor 10th in the G1 Prix de Diane Longines June 20. Cirona will be saddled by Christophe Ferland here, but part-owner Pete Bradley indicated she would be transferred to Chad Brown after this race.

“A filly like this is right in Chad's wheelhouse,” said Bradley. “It doesn't look like there will be firm going up there. I don't think some cut in the ground ever hurts with 90% of European horses. I don't see where the turf will be problematic regardless of what it is this week.”

The top two from the local prep for this event, the GIII Wonder Again S., return here in Con Lima (Commissioner) and Plum Ali (First Samurai). Only off the board once in 11 starts, the dark bay scored a decisive victory in the Honey Ryder S. May 1 and followed suit with a half-length defeat of Plum Ali in the Wonder Again June 3. Winner of this venue's GII Miss Grillo S. last term, Plum Ali was third in the GII Appalachian S. prior to the Wonder Again.

“She shows up and runs well every time,” said Todd Pletcher. “She finished up the mile and an eighth really well last time and being a daughter of Commissioner, you'd think the mile and a quarter would be within her scope. We're happy with the way she's doing and looking forward to giving her a shot.”

Rounding out the field is a horse making her first start in graded company, but who hails from a barn that can't be ignored in a turf stakes. The Chad Brown-trained Higher Truth (Ire) (Galileo {Ire}) won a pair of 10-furlong events over this course Apr. 22 and June 10.