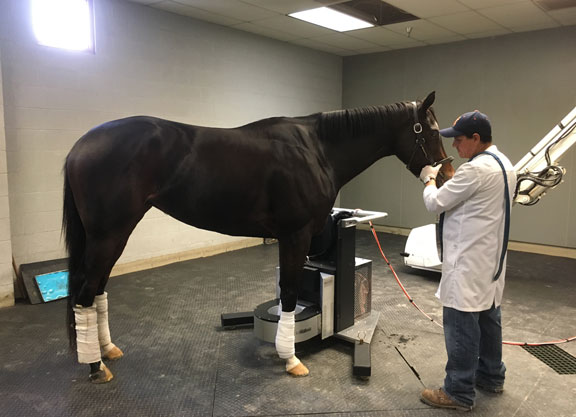 A horse being examined by a PET scan | UC Davis

This time last year, Mathieu Spriet, associate professor of Surgical and Radiological Sciences at UC Davis, had an idea for a PET scan unit that could image racehorses standing up, but at that time, the project didn't have funding, the technology hadn't been developed, and no one knew for certain whether it would even work.

One year later, and the physical manifestation of Spriet's dream–the Longmile Positron Emission Tomography (MILE-PET) Scan machine–has not only been at Santa Anita for three months already, but the findings from the initial set of scans done suggest it's achieving exactly what it was designed to do: Detect the sorts of subtle pre-existing injuries–those that can lead to catastrophic fatalities–earlier than other commonly-used imaging technologies.

What's more, the machine appears especially effective when used in conjunction with another recent addition to the Santa Anita imaging furniture: the standing magnetic resonance imaging (MRI) unit which arrived at the track in January.

“A year ago we had nothing–we didn't even have the money to build it,” said Spriet, about the PET scan unit. “We have definitely accomplished way more than I thought we would.”

Veterinary medicine has long called for more sophisticated imaging equipment within the racing industry. That's because studies have shown that pre-existing injuries–which aren't always clinically apparent–are present in more than 85% of catastrophic breakdowns, with the fetlock proving to be the most common site of catastrophic injury. The sesamoid bones within the fetlock are an especially vulnerable area. Injuries to these bones account for 50-60% of all musculoskeletal fractures, researchers have found.

Indeed, the California Horse Racing Board's (CHRB) recent report into 23 equine fatalities at Santa Anita early last year only hammered-home this fact. Twenty-one of these horses showed pre-existing pathology at the site of their fatal injury, the overwhelming majority of which involved the fetlock joint.

Nevertheless, the same report singles out the new PET and MRI units at Santa Anita as “exciting” diagnostic tools in the quest to catch these injuries sooner—a step forward in terms of clarity and detail from the X-ray and bone scan machines which are a backstretch staple. According to Ryan Carpenter, a private veterinarian, these two new technologies have already saved lives at Santa Anita.

“I have no doubt in my mind we've identified horses that were within a couple weeks of a breakdown with our imaging,” said Carpenter. “100% we've done it. And multiple times.”

The way the PET scan works mirrors a regular bone scan. A radioactive tracer is injected into the body, which will light up, under imaging, any abnormal areas in the bone. The MILE-PET machine resembles a basketball hoop hovering above the ground, with a quick-release mechanism in case the horse becomes fractious. In contrast, the MRI unit harnesses the body's natural magnetic properties to produce images.

As of this moment, 45 PET scans have been conducted on more than 30 horses, many of which had an accompanying MRI scan done (thanks to funding from the Oak Tree Racing Association). Some horses have been scanned multiple times–an important point that will be explained later in the story.

And how are horses selected? All show either visible lameness or swelling associated with the fetlock, the majority of which will then receive an x-ray and/or bone scan leading the attending veterinarians to suspect something worse is potentially brewing.

“These horses are coming from about 12 different vets and 20 different trainers,” said Spriet. “That's really good to see that this technology is being used and accepted by so many different people.”

What's more, though the Grayson-Jockey Club Research Foundation has funded a study covering initial participants, about half of the horses scanned have come from outside that study's remit, said Spriet. “So that means people are already ready to take money out of their own pocket to pay for the scan.”

As for what the scans have revealed thus far, “there's quite a range of different things that we see—not all horses at the racetrack show the same pattern,” said Spreit. “But now that we have over 25 horses, we've started to reach some interesting observations.”

Spriet shared data that he had recently presented to an audience of veterinarians and researchers at Newmarket during a conference on fracture risk assessment for the fetlock. The data set Spriet shared consisted of 25 individual horses, and scans from 56 different fetlocks.

Digging down into the numbers, the most common problem area was the palmar aspect of the metacarpal condyles–in other words, an area at the bottom of the cannon bone which enters the fetlock.

This is a region that is especially prone to fracture, and one where subtle problems can exhibit themselves early. Indeed, the CHRB's recent fatality report found that most horses with condylar fractures of either the front or hind cannon bone had pre-existing lesions–areas of the bone that show change or damage–of varying degrees at the site of the fracture.

Back to the PET scans, about one third of the horses imaged showed “uptake”–the drawing of radioactive tracer into potentially problematic areas of the bone–within the sesamoid bones.

Again, no surprise here. The CHRB's report found that 19 of the 22 horses that suffered catastrophic musculoskeletal injuries had sesamoid bone fractures.

But what is interesting, said Spriet, is how the PET scans show different “uptake” patterns within this part of the fetlock, with the most common problem region proving the dorsal proximal sesamoid bones–to put it simply, the front of the sesamoid bones.

What's more, where horses had been imaged multiple times–with six-week rest periods in between–the scans showed that bone injuries were location specific and didn't all respond in the same manner to time and rest.

“We knew from the initial study that potentially things can change pretty quickly, and this is confirmation of that,” said Spriet.

Some of the problems largely disappeared within six weeks.

“Which is what you want,” he said. However, some persistent bone issues showed little improvement over the six-week periods between scans.

“So, I think this is where the [PET unit] becomes a very useful tool,” explained Spriet. “It's not just a one-time thing. If you know you have a problem with a horse right now, this will help guide you. Do you rest him? Treat him one way or another? Then you re-check him, and in as little as six weeks, you can tell whether the problem has improved or not.”

So, what do the images actually illustrate? The PET image–a haze of red and yellow spots like a Jackson Pollock painting–shows the intensity and the degree of the potential problem. Spriet describes it as showing the “function” of the bone.

An MRI image, on the other hand, looks like a pencil sketch outlining musculoskeletal shape, the potential problem areas shaded in. Together, the two technologies are “correlating” well, said Carpenter.

“Because we have a lot of known history with the MRI, we want to know: Is the PET showing the same thing with MRI or is it showing us some different things?” Carpenter said. And indeed, issues that the PET scan picks up, and the MRI misses, are what Carpenter describes as “these small focal uptakes” in the sesamoids bones that don't “resolve quickly.”

“That for me is the most exciting thing with the PET because it's showing that this pathology is not responding as quickly as others, is very 'quiet,' and therefore hard to pick up,” he said. “But through a lot of the work that [UC Davis professor of veterinary anatomy] Sue Stover has done, this is where sesamoid bones fracture.”

Over time, Carpenter expects veterinarians who use the PET and MRI units regularly to become more familiar with how and when to use them–more adept at identifying horses earlier and earlier for diagnostic imaging.

“That's a tremendous amount of data that we're going to collect that's going to change the way we look at the fetlock,” said Carpenter.”

Spriet sings a similar tune. Because the PET produces a quantifiable measurement–a standardized uptake value [SUV]–there will come a time, Spriet predicted, when the PET unit will be used to help determine an objective “threshold” to distinguish potentially “at-risk” horses.

“With the [SUV] numbers, I can figure out if it's just a little bit abnormal or very abnormal. We do that with other imaging modalities, but we're talking about something that's very subjective,” said Spriet.

Nevertheless, “this is still super early,” said Spriet, of the work being done with the PET technology. “I've said it in the past, I've said it multiple times, and I'll say it again: I think we're still learning from every scan, and once we have over 100 horses under our belt, we'll have a better idea of what's going on,” Spriet added.

“But every day I get a message from the [technician], to say that they've sent me a new scan, it's always with a level of anticipation, see what new we're going to learn. I can tell you that my level of excitement keeps going up and not down.”