Santa Anita: Reactions from Those Present 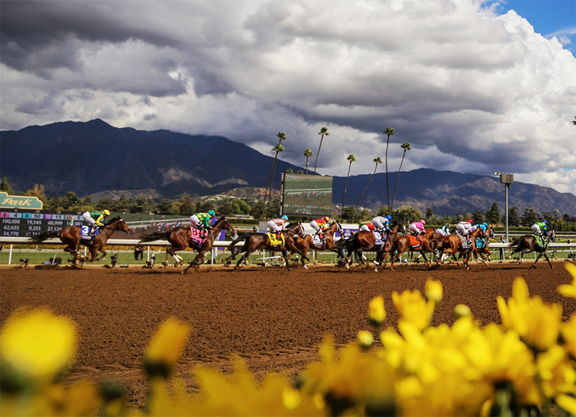 In a crowded conference room tucked away in the Santa Anita Grandstand during a meeting that was at various times somber, heartfelt, laudatory and heated, the California Horse Racing Board (CHRB) green-lit a sweeping set of changes that promise to alter the face of racing in California. The following lightly edited responses are a range of reactions from some of those present:

Jockey's Guild attorney, Tom Kennedy: “The guild is anxious to work with the horse racing industry and the CHRB to develop an appropriate rule for use of the crop that protects the animal and ensures safety,” said Kennedy, in sober mood while the meeting progressed, when asked about the guild's approach as the proposed whip rule change enters a 45-day public comment period. “But we don't think that the rule that was adopted today is adequate for purposes of the best management of horse racing.”

Senior vice president of PETA, Kathy Guillermo: “It seemed very progressive and pretty good,” said Guillermo, whose address to the room during the meeting was met with scattered groans of disapproval. “We support the new rules that the Stronachs have proposed, and we're glad to see the horse racing board, and at least some of the owners and trainers, get behind those.”

“It's very interesting to me to see the discussion of the perception of racing, because there's a persistent belief among many in racing, not all but many, that if they could just educate the people on what they do, it'll be ok, but you're never going to educate the public into thinking it's ok to hit a horse, or medicate a horse, or mask injuries with legal medications. So, I think it's very important the idea that to change perception we need to change practices-that's what's going to make a difference to the views of the public.”

“I think all the important people said the right things, and I was very pleased actually,” said Cassidy. “It's going to affect everybody, but we're just going to have to work around it. You can work around Lasix, certainly. As far as medications go, that's just the way it is. I don't think there's going to be that much of a change for a lot of people, because the majority are not abusing the system.”

Cassidy said that only three of his horses need more than 5 ccs of Lasix–the new permitted administration level at Stronach Group owned tracks in California. “And two of them are on route to Florida as we speak. They're bad bleeders. I wouldn't even take a chance with them. I'm fine with the whip rule–I know how the jock's feel. Believe me, there's a lot of them that get on a horse, they don't feel very secure without a stick in their hand. But they've just got to understand what we're going through, and the perception that people think about you whaling on a horse–people just don't swallow that. I understand what the riders are saying. I understand how they feel. I understand how the gamblers feel. I understand how everybody feels, about every issue. But it's a different time, and we have to adjust to it.”

CHRB commissioner, Madeline Auerbach: “I think that the board showed courage today and I think we did the right thing,” said Auerbach, whose terse exchange with Jockeys' Guild national manager, Terry Meyocks, was one of the more strained moments throughout the meeting. “Today, we stood up for the horse. We gave voice to the horse in everything we did today, and I don't think anybody can argue with that.”

When asked if the measures implemented by the CHRB should be employed nationwide, Auerbach said, “It better, if the industry's going to survive. I think it's survival of the industry. If we don't take the health and well-being of the horse, and what goes into that, and make it the core of what we do, we're not going to survive as an industry. That's my belief.”

Gary Fenton, chairman of the Thoroughbred Owners of California's (TOC) Racing Affairs Committee: “I thought the meeting went as expected. As I mentioned before, there was a big meeting before any of this got announced, all the stake holders were in the room, and they wanted to make positive changes for the entire industry. And it was within that mentality that these proposed rules were initiated. And today was an important step to moving forward with that.”

As to the possibility of expanding the therapeutic medication changes state-wide, Fenton said that “We sat down with Belinda [Stronach], and came to a meeting of the minds, and that was important to re-opening the gates here. We haven't had those discussions with Del Mar or Los Alamitos, and until we do, and understand how they feel, there's nothing we can say [publicly]. Obviously, we feel good enough to agree with Belinda on some of them. I think we believe in some of them strongly, but this is a stake-holder business, right? There are the owners, there's the trainers, there's the racetrack management, there's a regulatory body, so, it's now time for us to sit down with the other racetracks to discuss how they feel. We've got 30 days.”

TOC's director of racing and Northern California operations, Elizabeth Morey: Further explaining the TOC's approach to potentially expanding the therapeutic medication changes state-wide, Morey said that, “We're actually in our regular process of starting our horseman's agreements with those associations as part of their licensing process, so, I would expect that we will address medication as part of our negotiations over our horseman's agreements.”

“Bad bleeders will be no more-they'll be retired,” he said, about the Lasix change. “I've already retired one and I'm sending one to Kentucky. Owner didn't want to see him bleed. Horse bleeds real bad, so she retired him. The other one went to Kentucky where they can use more Lasix.” As for the other medication changes, “I think it'll be nationwide before we know it, so, we're just going to have to deal with that,” he said. “We're just going to have to learn to adjust.”

Trainer Leonard Powell: “I'd say it opens the window [to breaking the rules] in major races where purse money is not the only factor,” said Powell, about the changes to the whip rule which, as currently written, would lead to jockeys facing possible suspensions, fines and purse-cuts. “The residual value of a horse comes into context, and the connections of the horse could tell the jockey, 'You know what, if that makes the difference between being third in a big race and winning, where a horse gains considerable value, we'll pay for your fine, and we'll pay for whatever it costs you.'”