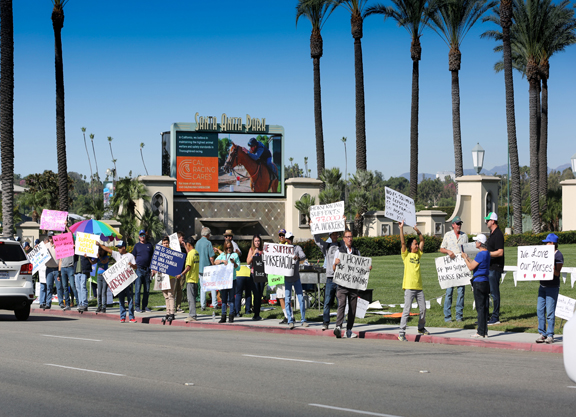 To the intermittent swagger of a five-person Banda group and fitful claxons of passing cars, Santa Anita’s racetrack community gathered outside the facility’s grounds Saturday in a bid to interrupt the more incessant drumbeat of bad news hounding the sport this year.

“We just want to confront the false narrative that animal rights protestors have been espousing,” said Oscar de la Torre, the coordinator of the event. Not that de la Torre is a backstretch worker himself. He runs a non-profit youth center in the Los Angeles city of Santa Monica, but his uncle, Juan Palos, was a groom at Hollywood Park until the facility closed in 2013, after which Palos moved in with his nephew’s family, said de la Torre.

“He found it very hard to find another job when Hollywood Park closed,” said de la Torre, explaining the purpose of the demonstration. “They’re the backbone of this industry, these workers. They start their day at four in the morning to take care of the horses, and those would be the people most negatively impacted if horse racing was banned.”

Indeed, the threats de la Torre referenced are as political as they are grassroots. California governor Gavin Newsom is reported to have told the New York Times, for example, “I’ll tell you, talk about a sport whose time is up unless they reform. That’s horse racing.”

This is the second week in succession backstretch workers have gathered outside Santa Anita, with an estimated 60 people its peak on Saturday–the demonstration began at nine in the morning and lasted until early afternoon. It follows a tradition that began at Del Mar, when backstretch employees set up shop outside the entrance to the track to offer racegoers a counter-narrative to the animal rights protestors that weekly picketed the facility.

“What we started off calling counter-demonstrations have turned into celebrations of our industry,” said de la Torre, explaining the live music and taco station behind him. These events, he said, will continue every Saturday leading up to the Breeders’ Cup. “We know that during the Breeders’ Cup there will be a lot of activity–we know the animal rights activists will be occupying this space, protesting.”

Owners, trainers, jockeys, and their agents lined up alongside grooms and hotwalkers employed by a variety of trainers, including Doug O’Neill, Mark Glatt, and Richard Baltas.

“I really do think other jurisdictions would really benefit from going out there and standing up for racing. What is it they say? If you don’t stand for anything, you’ll fall for everything,” said O’Neill, who has helped organize the events at Del Mar and Santa Anita.

In the past, racing has adopted an approach of, “well, let’s not poke the bear,” explained O’Neill, who added that in an age where the proliferation of information through social media can be swift and devastatingly effective, racing can no longer rest on its laurels.

“We’ve got to show the human connections in this sport–the relationships we have with our horses and how we’re proud of that,” he said.

While animal rights groups have picketed that area of the facility in the past, there were no such protestors in the near vicinity Saturday. According to O’Neill, a handful of protestors that appeared the week before remained only for a short period of time.

“It’s good that we’re showing the other side,” said Tyler Cerin, the son of trainer Vladimir Cerin, whose altercation with a protestor at Del Mar in August has left him with a wrist injury that still requires strapping. “I think most of the public supports horse racing, but all they’ve seen is the negative publicity on it.”

Tony Matos, the veteran jockey’s agent to such luminaries in the saddle as Angel Cordero and Laffit Pincay, has been a frequent face at these events. “Whenever they hold them, I’ll be there,” he said. “I support horseracing.”

For Lisa Beattie, an owner-breeder in California, Saturday was an opportunity to share some of her more intimate connections with the sport. “We spend years of our time and our money and our love just to get them to [the races],” said Beattie, who currently has three retired racehorses in her backyard. On a chain around her neck is a small vial of ashes belonging to Carrousel Clown, a retired racehorse who recently died aged 30.

“I had him at home all those years,” she said, about a horse whose second career included a cameo appearance in the movie Nixon, filmed at Santa Anita. “He was my first off-track Thoroughbred that I brought home. He was pretty special.”