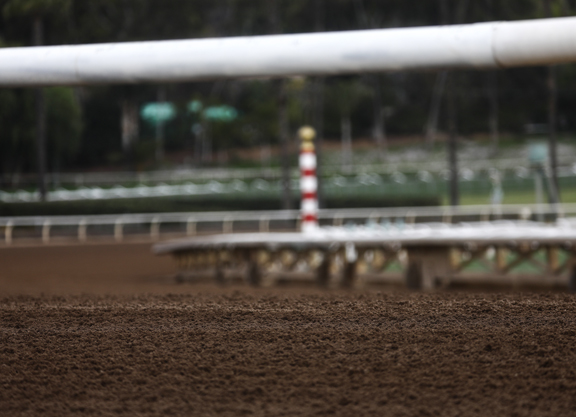 As the resumption of live racing at Santa Anita looms nearer, the picture is becoming steadily clearer over the potential rules of engagement, following an announcement earlier this month of a sweeping set of new medication and safety protocols to be implemented at Santa Anita and Golden Gate Fields. Nevertheless, question marks linger over a number of important details.

Entries were made Sunday morning for next Friday, Mar. 29, marking the return of live racing at Santa Anita after a hiatus of more than a month in the wake of 22 equine fatalities at the facility since the start of the winter-spring meet.

Santa Anita racing secretary Steve Lym also announced on Sunday a new system at entry time, which adds an additional layer of scrutiny on “at-risk” horses. Lym explained that after entries are taken, the horses' respective past performances will be scrutinized for certain patterns. The racing office will then contact trainers of horses identified as being at higher risk of catastrophic injury and, if necessary, a commission veterinarian will conduct a physical examination of the horse. This system will begin when entries are taken at Santa Anita for next Saturday and Sunday, said Lym.

This system mirrors the one in place for morning workouts. Currently, trainers must notify the racing office 24 hours before breezing. Lym said that on Monday, the notification time on workers will be extended to 48 hours. “Part of the reason for that was to give the staff enough time to examine the horses that need examining,” said Lym. There will be no requirement for private attending veterinarians to sign off on a horse's soundness prior it breezing, which had been raised as a possible new policy, he said.

Many of the proposed new rules are pending approval by the California Horse Racing Board (CHRB) at its hotly anticipated scheduled meeting on Thursday, Mar. 28 at Santa Anita. Santa Anita could release a statement over the next few days for the horsemen, “just so they know what they're entering for,” said Lym. He warned, however, that while the CHRB is expected to approve the proposed rules, the horsemen should be prepared for the possibility of further changes at the meeting.

On the agenda at Thursday's CHRB meeting are a variety of items, including discussion and action on proposed medication changes at Santa Anita and Golden Gate Fields. CHRB equine medical director Rick Arthur explained to the TDN some of the specifics to the new medication rules, “if the board moves forward as currently expected.”

There will be “no authorized threshold” for nonsteroidal anti-inflammatory drugs (NSAIDS) and corticosteroids, and no “stacking” of these drugs, either; by house rule, the stand-down for intra-articular corticosteroids will be extended to 14 days–double the current recommended withdrawal period based on thresholds. The stand-down times for permitted NSAIDS have also been altered, with the withdrawal time for Phenylbutazone extended to 48-hours, for example. The stand-down for shockwave therapy will remain the same–10 days.

The medication rules are “pretty back and white,” said Jeff Blea, a Santa Anita-based private veterinarian. “The one thing that's a little bit of a grey area is corticosteroid injections,” he said. “It's very clear it's a 14-day stand-down time. It's not clear, as far as levels of medications… They say at 14 days we should be safe, so I think we're going to have to go on that premise for the time being.”

Blea said that, besides the expected changes to use of NSAIDS and corticosteroids, “there's not much difference” to the rules currently in place. But he added that the ambiguity over some of the specifics has been a cause for concern. “There are two things trainers and veterinarians don't want. One is a positive test. And two is a dead horse,” he said.

On Thursday's meeting agenda is an item giving the board the option of making any possible changes to authorized therapeutic medications applicable state-wide for 12 months. Josh Rubenstein, president of the Del Mar Thoroughbred Club, wrote in an email that “while Del Mar is in communication with the TOC, CHRB and others on our upcoming meet, we don't believe it's productive, at this time, to comment on specific changes that may be in place this summer.”

Del Mar's license application for its 2019 summer race meet is scheduled to be heard by the CHRB's meeting in May, and so, “in the next 30 to 60 days we'll be in a position to address the implementation of enhanced procedures to maintain the highest standards for both equine and rider welfare, safety and care programs,” Rubenstein wrote. “What we can say now is Del Mar is proud of the progress we've made over the last several years and our team is committed to the continuation of the industry's most progressive safety and welfare protocols.”

A participatory teleconference Saturday at Santa Anita involving trainers, and official and private veterinarians was “very productive” and “informative,” said California Thoroughbred Trainers executive director, Alan Balch, after the meeting concluded. “The trainers are going to have to take into account all that they learned today in making entries,” Balch said, adding that the tone of the meeting was “very serious.”

“We believe this is an interdependent sport and industry, and we strongly believe that when decisions are made, they should be made on a cooperative basis with everyone involved in the same room, at the same time, at the same place,” said Balch. “And we sure would like to see that going forward because that type of cooperative approach to rule changing really is the best way to avoid any misunderstanding or misinformation.”

Among a number of other topics discussed at Saturday's teleconference, Balch said, was the proposed changes to use of the riding crop. The changes still allow jockeys to carry a whip, but they will not be permitted to use it in anyway except what is necessary for the safety of the horse or the rider. According to Balch, “The trainers will be very pleased to go with whatever the riding crop rule is, however it's modified.”

There are two separate parts to these proposed changes. The first concerns an “in house” rule change applicable only to Santa Anita and Golden Gate Fields. The second is a proposed regulatory amendment that would restrict the use of riding crops at all racetracks in California.

“We have no way of knowing whether a majority of commissioners would vote to make this a regulatory matter,” wrote the CHRB's public information officer, Mike Marten, in an email. “If the Board does decide to move forward with an amendment, that process could easily take as long as seven months and would require a 45-day public notice and comment period followed by a public hearing, leaving plenty of time for a thorough discussion of all aspects of the proposal.”

Jockeys' Guild national manager Terry Meyocks said that the Guild is currently “still in discussion” with The Stronach Group, and that there could be greater clarity on the situation by the start of the week.

Another agenda item concerns the proposed change to the use of Lasix at Santa Anita and Golden Gate Fields, cutting in half the permitted level from 10cc to 5cc. An agreement on this issue was reached on Mar. 16 between the Thoroughbred Owners of California (TOC) and TSG. Not mentioned in the package for Thursday's meeting is the other part of the proposed change concerning Lasix–that 2-year-olds starting in 2020 will race entirely Lasix free.

Because the horses in question aren't yet of racing age, and therefore not competing at the current Santa Anita meet, “I don't know if the CHRB will address it at this meet,” said TOC's director of racing and Northern California operations, Elizabeth Morey. “I don't know if it gets heard at the CHRB meeting this year, or if it gets heard at a CHRB meeting when we actually go through the license application process for the Santa Anita winter-spring meet.”

According to trainer Leonard Powell, it's the question of enforcement of these proposed rule changes about which he has the greatest concerns. “Everybody knows that they don't have the man-power to enforce all these rules,” he said. “The main thing with rules, people will accept most of them if they are fair and everybody has to follow them, but if they're not fair, then that's what they raise questions.”

Powell also said that he has doubts about the specifics concerning proposed changes to use of the riding crop. “Let's say a jockey whips his horse and wins a race, do you fine the jockey? Do you DQ him? And if you DQ him, where do you DQ him? Behind the second horse? Behind the third horse? Let's say you have a five-horse field and all five jockeys whip their horses, do they all get disqualified?” he said. “Many of these rules are good, but they're all a little utopic. They didn't seem to have thought about how they're going to work in the real world.”

Earlier on Sunday, Daily Racing Form reported that Gunmetal Gray, winner of the GIII Sham S., suffered a condylar fracture after a workout at Santa Anita on Sunday morning, and was to undergo surgery later in the day. Terry Finley, president and chief executive of West Point Thoroughbreds, which co-owns the colt, said the injury “doesn't appear to be career-threatening.”