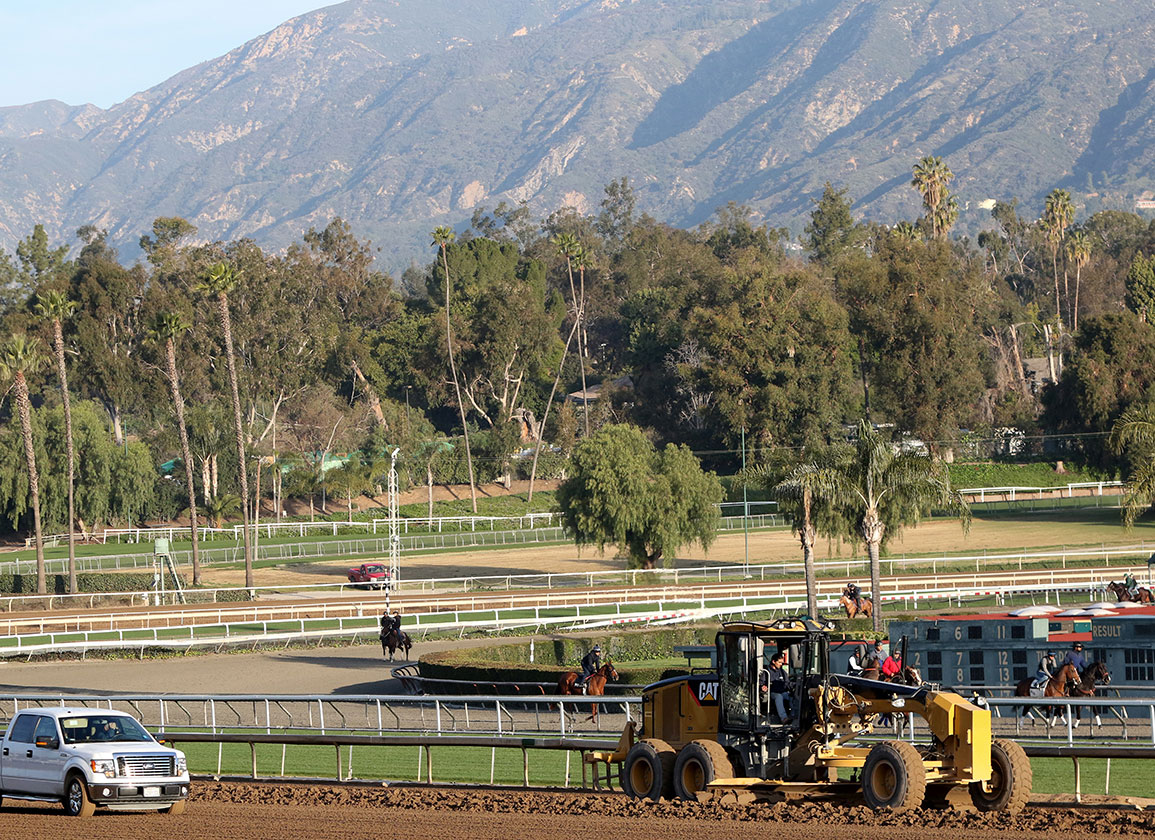 As the fallout from The Stronach Group's bombshell announcement Thursday–which stated that they were implementing a ban on the use of Lasix at Santa Anita and Golden Gate, along with a number of other notable changes–reverberated through the industry Friday, more specifics trickled in, shedding a little more light on the various stakeholders' reactions. There will also be “complete transparency” of all veterinary records, and increased out-of-competition testing.

Describing it as a “watershed moment,” Belinda Stronach, head of the TSG, wrote in a statement that, in addition to banning Lasix, the new policy will increase the ban on legal therapeutic NSAIDs, joint injections, shockwave therapy and anabolic steroids.

Prior to the meeting, Balch circulated among his constituents a statement raising a number of broad concerns the trainers had about the measures laid out Thursday.

They included questions about whether the Lasix ban would extend to training, and if so, how would “testing be administered?” The statement also posed the question, “will TSG confirm to us, publicly or privately, that there is no scientific connection between Lasix usage and catastrophic injuries?” In regards to the issue of “complete transparency of all veterinary records,” the trainers wanted to know whether that similarly meant public access to these records, and if so, “under what circumstances and for what horses?”

The statement also raised the question of whether the same measures would be implemented at TSG facilities elsewhere around the country.

“Everybody agrees that those are the issues, but nobody has the answers,” said Balch, who, as the meeting concluded, said that he was about to meet with the Santa Anita management. “We're always willing to discuss anything with anybody.”

Earlier Friday morning, Greg Avioli, chief executive officer of the Thoroughbred Owners of California (TOC), explained to the TDN that his organization had been in talks “all week” with TSG management, including Belinda Stronach, and that the two groups share “a lot” of common ground.

“At the high level, we agree that it's time to address serious public perception concerns, and make the sport safer,” Avioli added. “That's why we have been an active participant in the process with them.”

Avioli acknowledged any number of dangling questions marks hanging over the specifics of the announcement.

Of all the changes raised in Thursday's announcement, the issue of Lasix was the “hot button” topic, said Avioli. A ban on Lasix, he said, “would have a substantial impact on every owner and every breeder in California and outside of California, given the length of time Lasix has been used by so many horses in the United States, all the stallions, all the mares. Any reform that would have major implications, literally impacting the whole industry, needs to be closer looked at.”

Avoili said that there is “good science” on both sides of the Lasix issue.

Avioli said that “everything's on the table,” when it comes to Lasix, which includes potentially banning its use in 2-year-old races first, mirroring a move made by the Breeders' Cup.

“We have yet to see their specific plan–they're the ones crafting this,” said Avioli about TSG, “so I can't really comment on it until I see it.”

When asked if the TSG could unilaterally implement a ban on the use of Lasix, Avioli pointed to language in state law that says “any conditions” that are based on a participating horse's use of a drug or medication, or the presence of a drug or medication in a biological test sample taken from a participating horse, “shall be agreed to in advance in writing by the acknowledged horsemen's organization, which, in the case of Thoroughbreds, shall be the owner's organization, and approved by the Board before entries are taken for the race.”

It would be “very, very difficult” given California law for TSG to implement a ban on Lasix “in the immediate future” without the TOC's approval, said Avioli.

As to the other measures announced Thursday, Avioli said that the TOC was largely in agreement.

“I don't see a lot of issues, consternation, etcetera, with the majority of what else was in the bullet points, again, subject to seeing the final details,” he said. “It's clear that no one is advocating for continued practices that are, or are fairly interpreted as, drugging horses, masking injuries, right? That's not the perception our sport needs, and if there are adjustments to our rules and policies to make that even stronger, we should.”

And he stressed the “shared sense of obligation” between the various stakeholders as negotiations continued. “We're the ones who are supposed to be the adults in the room, and we need to work together to figure this out. I'm confident we will.”

However, trainer Leonard Powell said he was speaking for many horsemen when he said that he was concerned about a possible 20% reduction in the Santa Anita horse population if TSG implemented quickly a ban on Lasix.

If this was a nationally uniform program, “we'd be ok,” said Powell. “But because we're the only ones doing it, we're getting screwed, because we're going to lose horses to other jurisdictions [that permit Lasix usage],” he said.

United States Congresswoman Judy Chu, who serves California's 27th District, which includes Santa Anita, issued a statement that she was calling for Congressional hearings on the treatment of horses in the United States. Chu posted the following on her Facebook page.

“I am outraged by the deaths at Santa Anita racetrack. Animals deserve to be treated with dignity and compassion, and the use of race-day medication like Lasix must stop. The U.S. is an outlier when it comes to the practice of injecting horses with this drug on race-day and we need answers on the impact of this practice at Santa Anita and throughout the country. I am calling on the House Energy and Commerce Committee to investigate and hold a hearing on the treatment of horses at Santa Anita and throughout our country, and to examine legislation like the Horseracing Integrity Act that would improve safety for racehorses. Until we know the horses are safe, the Santa Anita Racetrack should be closed.”

The Los Angeles County District Attorney's office confirmed a report from People for the Ethical Treatment of Animals that the office was investigating the equine fatalities at Santa Anita.

“At this time, the District Attorney's Office has assigned investigators to work with the California Horse Racing Board,” wrote Greg Risling, Assistant Chief of the Media Relations Division of the L.A. County D.A.'s office in an email to the TDN, before “politely” declining further comment. PETA had demonstrated at Santa Anita and outside the L.A. County D.A.'s office, and had called for a criminal investigation into trainers whose horses had broken down.

“The DA's office is doing the right thing, and PETA urges all tracks in the U.S. to stop the abuse and carnage and enact the changes made by Santa Anita racetrack–or get out of the business,” said PETA Senior Vice President Kathy Guillermo.

With the exception of Del Mar, racetracks around the country declined to comment or responded cautiously to the move.

“The future of the sport depends on the health and welfare of the horses competing at racetracks here in New York and around the country,” said NYRA's Interim CEO David O'Rourke. “That is why NYRA has implemented extensive reforms and made significant investments in recent years to improve track surface conditions and upgrade facilities and equipment while providing veterinarians with the independent authority they need to properly monitor thoroughbred health. Advancing measures to ensure safe racing and training is an ongoing process that requires constant attention and close coordination with horsemen, regulators, owners, racing officials and industry partners. While our collective efforts have yielded positive results, there is always more work to be done and we are constantly striving to enhance safety protocols in the course of active dialogue with independent experts, veterinarians and scientists in relevant fields.”