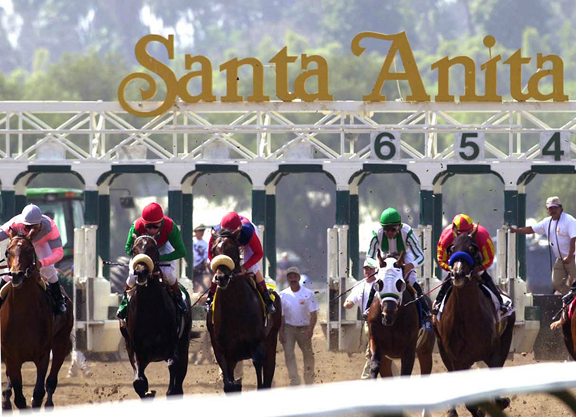 A total of 21 added-money events, 12 at the graded level, have been scheduled for the autumn meeting at Santa Anita Park, set for Oct. 1-31.

Fully one-third of the stakes races serve as 'Win and You're In' races for the Breeders' Cup World Championships to be held Nov. 6 and 7 at Del Mar. The opening day of the meet features the GI American Pharoah S. for the 2-year-old males at a mile and a sixteenth, the corresponding 2-year-old filly race–the GI Chandelier S.–and the $100,000 Speakeasy S. for juvenile turf sprinters, each offering a fees-paid berth into the respective Breeders' Cup races. Thee GII Eddie S. is also set for opening day.

The Saturday, Oct. 2 card is highlighted by a pair of Grade Is–the Awesome Again S. for older handicap males long on the dirt; and the Rodeo Drive S. for turf distaffers at 10 furlongs, each serving as Breeders' Cup qualifiers. The GII Santa Anita Sprint, also a 'Win and You're In' event, and the GII City of Hope Mile for sophomore turfers, take place Saturday.

Opening weekend concludes with the last of the Breeders' Cup races, the GII Zenyatta S. for fillies and mares on the main track; the Surfer Girl S. and Zuma Beach S. for 2-year-old fillies and males, respectively, on the turf; and the GIII Sherwood Chillingworth S. (formerly LA Woman S.) for older filly and mare sprinters.

The meet's other graded races, the GIII Autumn Miss S. for 3-year-old turf fillies, and the GII Twilight Derby, will be offered closing weekend Oct. 30 and 31.