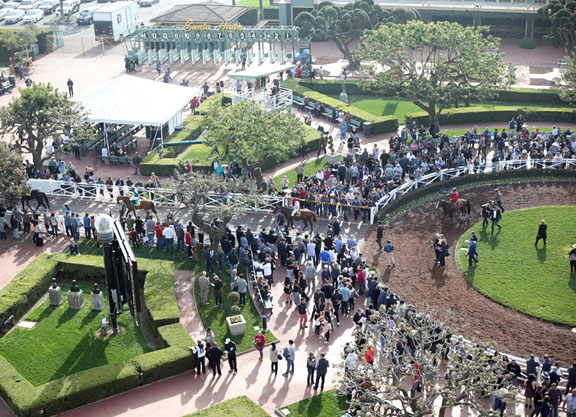 The paddock at Santa Anita | Horsephotos

The California Horse Racing Board has requested that Santa Anita suspend the final seven days of its current meet, but officials of the track have said they will not do so.

The CHRB's request came following Saturday's catastrophic breakdown of Formal Dude (First Dude), who was euthanized following the running of the day's 10th race. Another horse, Calumet Farm's 3-year-old filly Truffalino (English Channel), died of an apparent heart attack in Sunday's third race at the Arcadia oval, according to Daily Racing Form. That death raised the total number of fatalities at Santa Anita to 29 since the meet opened Dec. 26.

The story was first reported by both the Los Angeles Times and the Louisville Courier-Journal.

Tim Ritvo, the COO of The Stronach Group did not answer a text from the TDN regarding comment on Santa Anita's decision to remain open. The meet is scheduled to end June 23.

It is not within the CHRB's power to order a racetrack to immediately close unless the track agrees to its wishes. However, the racing board can take such action after a bureaucratic process that begins with 10-day notification period. It was not immediately clear if the CHRB can, or would, shut down Santa Anita for the remaining three days of the meet following the 10-day notification period.

The CHRB sent a statement to the Courier-Journal, which read: “Under current law, The California Horse Racing Board does not have the authority to suspend a race meet or remove race dates from a current race meet without the approval of the race track operator or without holding a public meeting with ten days public notice.

“The Chairman, Vice Chairman and the Executive Director recommended to Santa Anita management that they suspend racing for the seven remaining race days but that they allow horses to continue to train during that period. This would provide the industry more time to fully implement announced safety initiatives and perhaps additional ones.

“It is our understanding that Santa Anita management, after consultation with certain other industry stakeholders, believes that for a variety of reasons, the future of California racing is best served by continuing to race.”

The CHRB did not ask Santa Anita to close down for training, something that would create a crisis for Southern California horsemen because training cannot begin at Del Mar until July 11. Until that time, the San Diego County Fair has full use of the property,

According to the Times, Formal Dude died of a pelvis injury. Most equine fatalities happen when horses fracture one of their front legs. But the Times report says that of the five deaths at Santa Anita since May 17, four of them have been either shoulder or pelvis injuries.

Breeders' Cup President Craig Fravel told the Courier Journal that the organization is exploring contingency plans and said that the only other track that has been mentioned as an alternate site is Churchill Downs. A Breeders' Cup Board meeting is scheduled for June 27.

“I think it's fair to say our board will have a full report from management on everything we know about the situation in California as well as injury rates at other racetracks and we'll have to evaluate that situation and what our options are,” Fravel told the Courier Journal. “That's really ultimately a board decision, so I have to defer to that process.”

On Friday, the Times reported that trainer Michael Pender was suspended 30 days by the CHRB for violating a rule regarding animal welfare.

The ruling regarding Pender's suspension read: “Pender knowingly worked the horse New Karma after a veterinarian examination disclosed an injury. This horse was then shipped to Golden Gate Fields where it was entered into a race on April 6, 2019, but subsequently scratched due to its condition.”

Pender is among a handful of trainers who have either been suspended or ruled off the grounds at Santa Anita due to alleged violations regarding the welfare of horses under their care. Among them was trainer William Morey, who was banned from racing at Santa Anita for a medication violation that led to an investigation by the California Horse Racing Board.