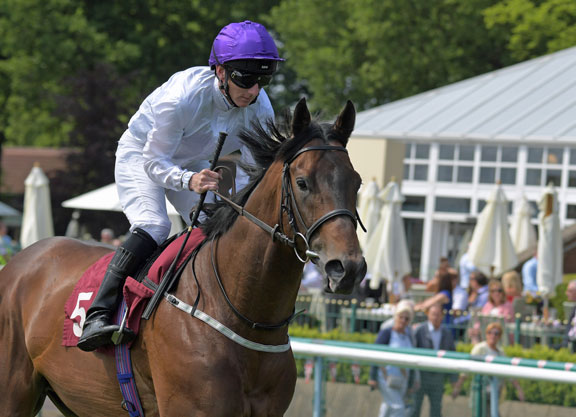 Group 1-winning sprinter Sands Of Mali (Fr) (Panis-Kadiania {Fr}, by Indian Rocket {GB}) has been retired to stud. It was not specified where he will stand.

Owner Cool Silk Partnership tweeted on Tuesday, “on a day when a potential future flag bearer for us [Faora] wins on debut, our star Sands of Mali is confirmed to start his next career at stud. An absolute legend of a horse –our first and only Group 1 winner to date! Hugely talented and as @RichardFahey says, a machine on the gallops.

“A clean pedigree, a beautiful physical specimen and bundles of natural ability–we can't wait to see mini Mali's hitting the track in a few years time. A huge thank you to team

@RichardFahey for all the hard work put into training and looking after him over the last three years.”

Sands Of Mali was pinhooked by Con Marnane, turning a €20,000 yearling pricetag into £75,000 at the 2017 Tattersalls Ascot breeze-up sale, and he justified that jump when winning the G2 Gimcrack S. on his third start. He won the G3 Prix Sigy and G2 Sandy Lane S. to kick off his 3-year-old campaign before finishing a half-length second in the G1 Commonwealth Cup, and he gained redemption back at Ascot four months later when besting Harry Angel (Ire) (Dark Angel {Ire}) in the G1 British Champions Sprint S. Sand Of Mali went winless in four tries last year and two this season.