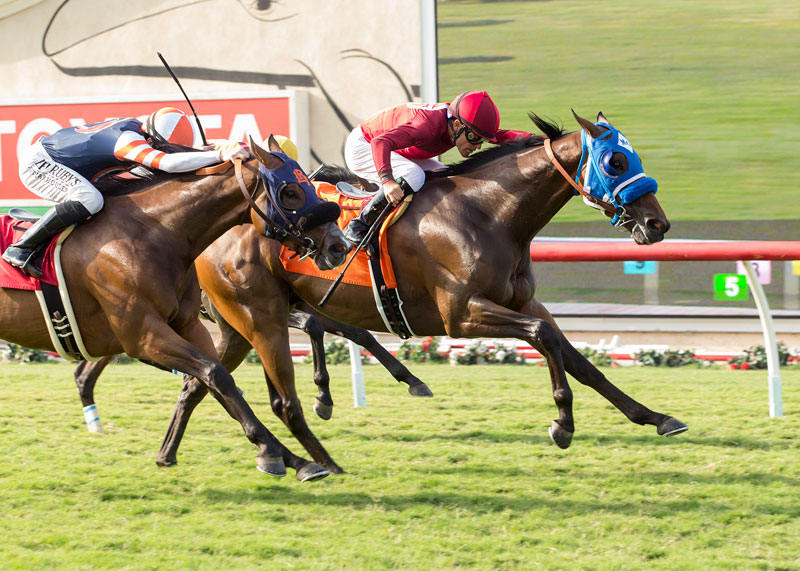 Sharp Samurai has done little wrong since switching to the turf and Sunday's GII Del Mar Derby was no exception. The bay launched a strong rally to the front and held off a late bid from Big Score (Mr. Big) to earn the second graded stakes success of his young career. The Mark Glatt trainee was sent off as the 2-1 post-time favorite. Racing in midpack behind fractions of :24.10 and :48.91, Sharp Samurai swung to the outside coming off the turn and rallied to strike the front in upper stretch. Kept to his task by Gary Stevens, he had plenty left in the tank to hold the runner-up, who spent the first half of the year competing on the East Coast, at bay.

“This is very exciting,” said Glatt. “I thought he was well-placed early, in the clear which is where we wanted to be. We didn't think they'd be going very fast and when they don't go fast they have a tendency to bunch. Gary rode him perfectly, pushed the button exactly when he needed to and the horse responded.”

Winner of the Rainbow S. over nine furlongs on the Santa Anita turf June 10, Sharp Samurai made it two-in-a-row with a hard-fought tally in the GIII La Jolla H. here Aug. 6.

Canadian stakes winner Secret Wish is a half-sister to the filly Academic (Henny Hughes), who won the 2015 Woodbine Oaks prior to besting males in the GIII Canadian Derby and GIII British Columbia Derby. Secret Wish is also kin to Awesome Fire (Strong

Contender), winner of the grassy 2012 Wonder Where S.

and third in that year's Woodbine Oaks. Sharp Samurai is the

last of two listed foals for his dam.