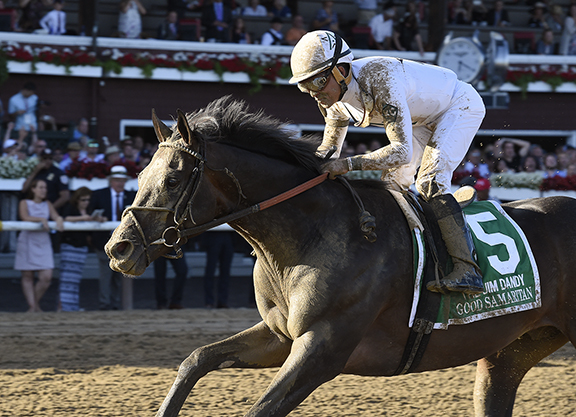 Guiseppe the Great (Lookin At Lucky) completed the exacta as the longest shot on the board at 14-1. The Derby winner Always Dreaming (Bodemeister) hung on by a head to finish third as the even-money favorite; Preakness hero Cloud Computing (Maclean's Music) was last of five.

It had been 26 years since a Kentucky Derby and Preakness winner faced off in a race at Saratoga.

“You saw him coming through the stretch,” said Hall of Famer Bill Mott, celebrating his 64th birthday and fourth Jim Dandy victory Saturday. “He looked pretty good. We'll certainly nominate for the [GI] Travers [S. Aug. 26] and we'll talk about it. I don't see why we wouldn't give it a try.”

Sent off at 8-1 in this five-horse affair, last term's GII Summer S. hero and GI Breeders' Cup Juvenile third-place finisher, drawn widest of all, was immediately guided to the rail by Joel Rosario.

Good Samaritan, nominated to this year's Triple Crown, was content to trail the field as Always Dreaming set an uncontested pace through opening splits of :24.13 and :48.53. Cloud Computing and 'TDN Rising Star' and impressive Santa Anita debut maiden winner Pavel (Creative Cause) drew alongside the pacesetter at the top of the stretch and the stage was set.

Good Samaritan, still riding the rail while trailing the field at that point, began to wind up and was tipped out widest of all as they straightened for home. The others offered little resistance and Good Samaritan came flying down the center of the track to blow his competition away.

Beaten only 1 ½ lengths while suffering his first career defeat as the 5-2 favorite in the big one at Santa Anita last fall, Good Samaritan made three previous starts in 2017. Second in both the GII American Turf S. May 6 and GIII Pennine Ridge S. June 3, the bay got going too late to finish fourth when last seen in the GI Belmont Derby Invitational July 8.

“[WinStar Farm President/CEO] Elliott Walden had been trying to get me to run him on the dirt ever since the Breeders' Cup last November,” Mott said. “We were going to do it earlier in the year and we missed some of the Triple Crown prep races and we decided to wait until after the Belmont Derby. We knew for sure he would run on the grass and we decided to do it after that. He was laid up; he needed a little time. He needed a couple months off and when he came back, it was too late for him to make any of the important prep races. When we were ready to run, we made our first race on Derby day, but obviously it wasn't the Kentucky Derby, we weren't ready for that.”

Kenny Troutt's operation bought Good Samaritan's dam Pull Dancer (Pulpit), a multiple stakes-placed runner on grass for owner Cam Allard and trainer Kiaran McLaughlin, for $150,000 as a broodmare prospect out of the 2010 KEENOV sale. She is also represented by the unraced 2-year-old colt Brave Nation (Pioneerof the Nile), currently in training with Mott at Saratoga; and a yearling filly by Tiznow headed to the Keeneland September Sale. Pull Dancer had a colt by Bodemeister earlier this spring.

“He broke really well, and it went like we were expecting. We got the lead and [Cloud Computing] was laying second because that's the types of horses they are. He put in a really good fight down the lane, he just couldn't get away from the other horses for whatever reason.” -John Velazquez, jockey aboard Always Dreaming

“I thought I had a perfect position in the race. I let Always Dreaming [No. 1] dictate the pace, so I was able to let up a little bit and save all the ground and, little by little, go for him. He [Cloud Computing] just didn't fire today.” -Javier Castellano, jockey aboard Cloud Computing

“He seemed to struggle with the track today. He just didn't have it, and that's about it. We are just going to have to reevaluate the horse tomorrow and go from there.” -Chad Brown, trainer of Cloud Computing