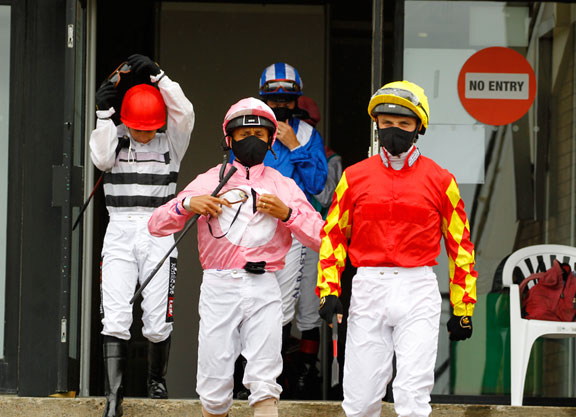 Jockeys in the UK | Racingfotos.com

A saliva testing trial, a screening method for cocaine and some other banned substances, is now under way at UK racecourses, the British Horseracing Authority announced on Wednesday.

Utilising oral swabs, the testing method results are provided near-instantly indicating whether substances are present in a rider's system above existing thresholds. If the trial is successful, British racing will become the first major sport in Britain to utilise on-the-day screening for banned substances through oral swabs. If a jockey does not test negative during the trial, they would be stood down from riding that day, which brings with it added benefits in safeguarding human and equine welfare on raceday.

At this time, all jockeys have tested negative-at Kempton on Monday and Lingfield on Tuesday. The pilot will continue for a two-month period. Saliva testing is highly cost effective and, if the pilot is successful, it is likely that there would be an increase in raceday testing, which would be further supported by an increased budget for more testing.

Brant Dunshea, Chief Regulatory Officer for the BHA, said, “Saliva testing is a progressive next step for our testing and surveillance of prohibited substances. In particular, the fact that it provides near-instant results means that we are now able to screen for the substance on the day of race.

“The fact that it is a more cost-effective methodology will also allow us to significantly ramp up our testing capacity–something that we are supporting further through the allocation of an enhanced testing budget. This should serve to act both as a deterrent to those who might consider using prohibited substances and provide reassurance to those who are competing on raceday.

“We are grateful to the Professional Jockeys Association for working alongside us in developing this methodology. It is important that it is assessed through a substantive trial period before we commit to it in the longer term, but this trial period is the final step in what has been an extensive process.”

“We see the introduction of saliva testing as a tremendously important development, and it is supported by our members,” said Paul Struthers, Chief Executive of the Professional Jockeys Association, who assisted with the development of the pilot.

“An effective deterrent against the use of prohibited substances is an essential piece of the jigsaw in terms of keeping our jockeys healthy and safe. The increased testing which this methodology will allow, alongside the ability for on-the-day screening, represents a significant step towards that ambition.”