Home » Archive » Shared News » Sadler on Flightline: 'The History is Yet to be Written'

Sadler on Flightline: 'The History is Yet to be Written' 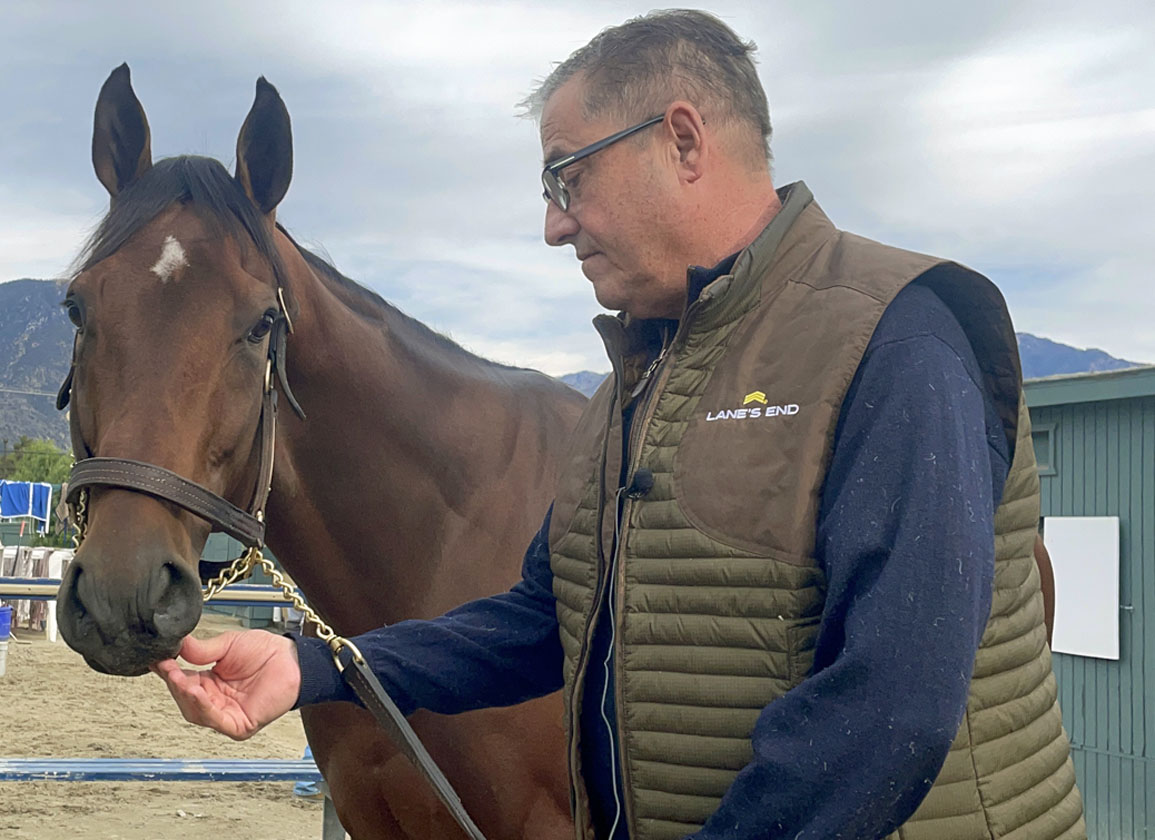 It's been a long time since I have been up at `dark thirty', but here I find myself happily strolling into Santa Anita Park at 4:30 in the morning–a far cry from nearly 10 years ago when I was galloping horses and would find myself running late whilst popping an Altoid and three Advil to quell the night-before activities.

Because I asked John Sadler for a Flightline (Tapit) interview and of course, Flightline trains at 5 a.m.

After a morning of carrots, coffee, and horses, I sat down with John and posed the question: After the likes of Cost of Freedom, Lady of Shamrock, Twirling Candy, Sidney's Candy, Gift Box, Flagstaff, Higher Power, Stellar Wind and Accelerate, has Sadler trained a horse quite as simply brilliant as Flightline?

“I really haven't,” Sadler said on a lazy, uncommonly-cloudy Monday at his barn under the backdrop of the San Gabriel Mountains. “He's probably the best horse I've ever trained. He's an amazing, special kind of horse that you get once in a lifetime, and I'm thrilled to have him.”

Flightline, of course, received Beyer Speed Figures of 105, 114 and 118 over his three lifetime starts. The latter, in the GI Runhappy Malibu S., was the highest given out this year. To put that into perspective, likely Horse of the Year Knicks Go (Paynter) got a 112 Beyer in the GI Breeders' Cup Classic and Life is Good (Into Mischief) got a 109 in the GI Breeders' Cup Dirt Mile.

So, what makes him so brilliant?

“He's so well-proportioned,” said Sadler. “He's powerful. He's correct. He's got everything you like. He's got that inner stallion, which I love. He's got it all.”

The sun finally began to peek across the mountains, reminding me I was up before it. I asked Sadler, “Why train him at 5 a.m.?”

“I think the track is best early,” Sadler said matter-of-factly. “It has a little more moisture in it, especially in the summer. Moisture is the key. We just think the surface is so good. So, a lot of them go in the first set. Stellar Wind loved to go in the first set. Accelerate went early. And then, they go out later when they work. I don't like to work in the dark.”

Lest one think some Sadler horses never see the light of day, never get the sun on their backs, they are all walked outside in the afternoon, something Flightline loves, Sadler said.

So much was made in the lead up to the Malibu, I asked John how he was feeling. He said he got the flu–yes, people still get that, and not just the Coronavirus.

Flightline, on the other hand, was gearing up for his final work with Flavian Prat, an odd move at the time as he had appeared hard to handle for assistant Juan Leyva in his work the week before. Holding an elephant from water comes to mind. 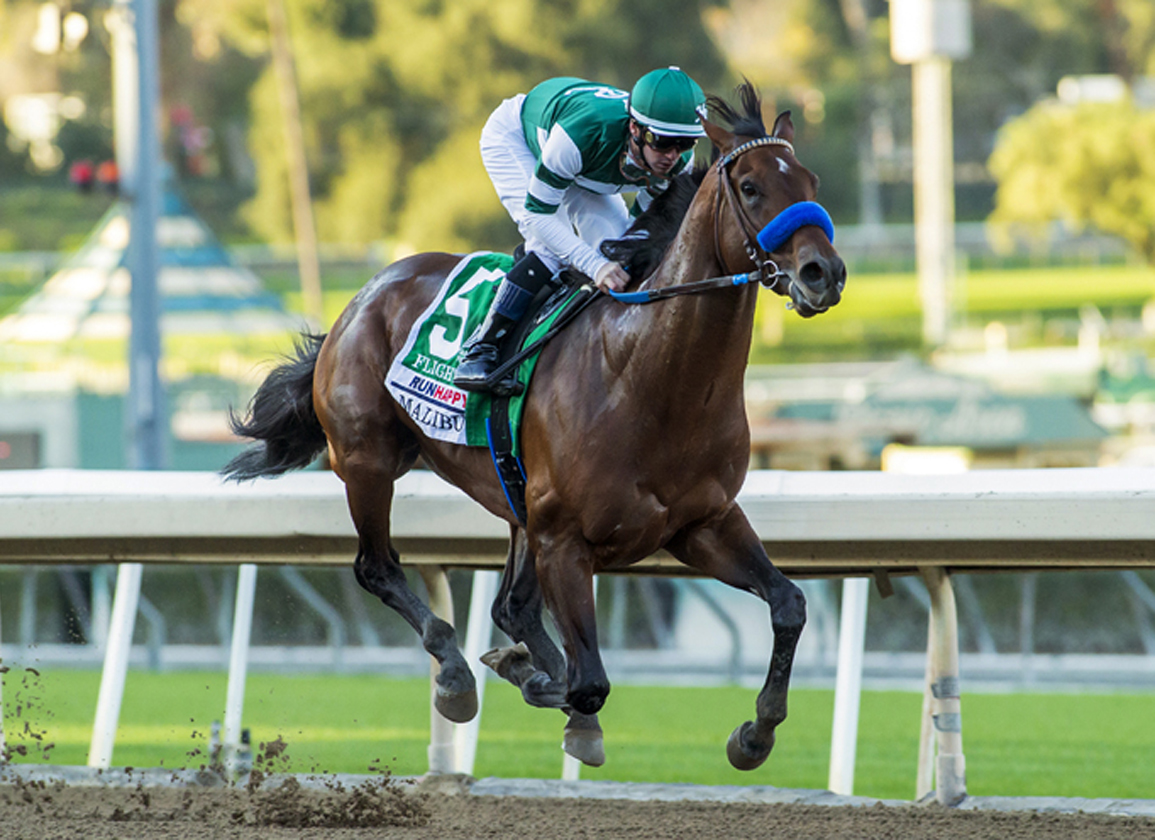 So, why let Prat drive the Ferrari the week before the biggest test of his young career?

“It seems Prat can turn him on and off like a switch,” said Sadler. “Yeah, that's why I put him on for his last work. You know you really must have a lot of trust to let somebody work him, and he's been on him a few times now and he gets him to relax in the morning.”

Flightline, of course, did not disappoint in the Malibu. So, what's next and who does Sadler compare him to?

“I think the comparisons come a little later as he does more. But you know, even after his first couple of races the comparables were Uncle Mo and Into Mischief. We will get some good tests down the road. At some point we will run into Todd [Pletcher]'s Life is Good, probably in the Met Mile. That will be exciting. The history is yet to be written on a lot of this.”

So, the plan right now with no hiccups, explained Sadler, “is one race to be determined before the Met Mile, then either the GI Pacific Classic S. or the GI Whitney S., then the Breeders' Cup.”

In other words, a Horse-of-the-Year campaign.

So, what kind of a personality does a potential Horse of the Year have?

“He's a bit of a live wire, you know,” said Sadler. “He's very bright. He's no deadhead. He's a very awake horse so we try to manage that. He will stand on the racetrack with the pony before he goes off and gallops. He's pretty good in the stall, but if there is a large bang, look out!”

When Flightline came out of his stall for pictures, the ever-reserved Sadler loudly exclaimed, “Look at that mother-humper. Is he not a gorgeous-looking horse?”

Flightline struck a pose; ears pricked, head up with that look of eagles. As Sadler's staff nervously looked on, he finally handed his assistant, Leyva, the shank. “Photo time is over,” he said. “Let's get him in. They are worried I will turn him loose.”