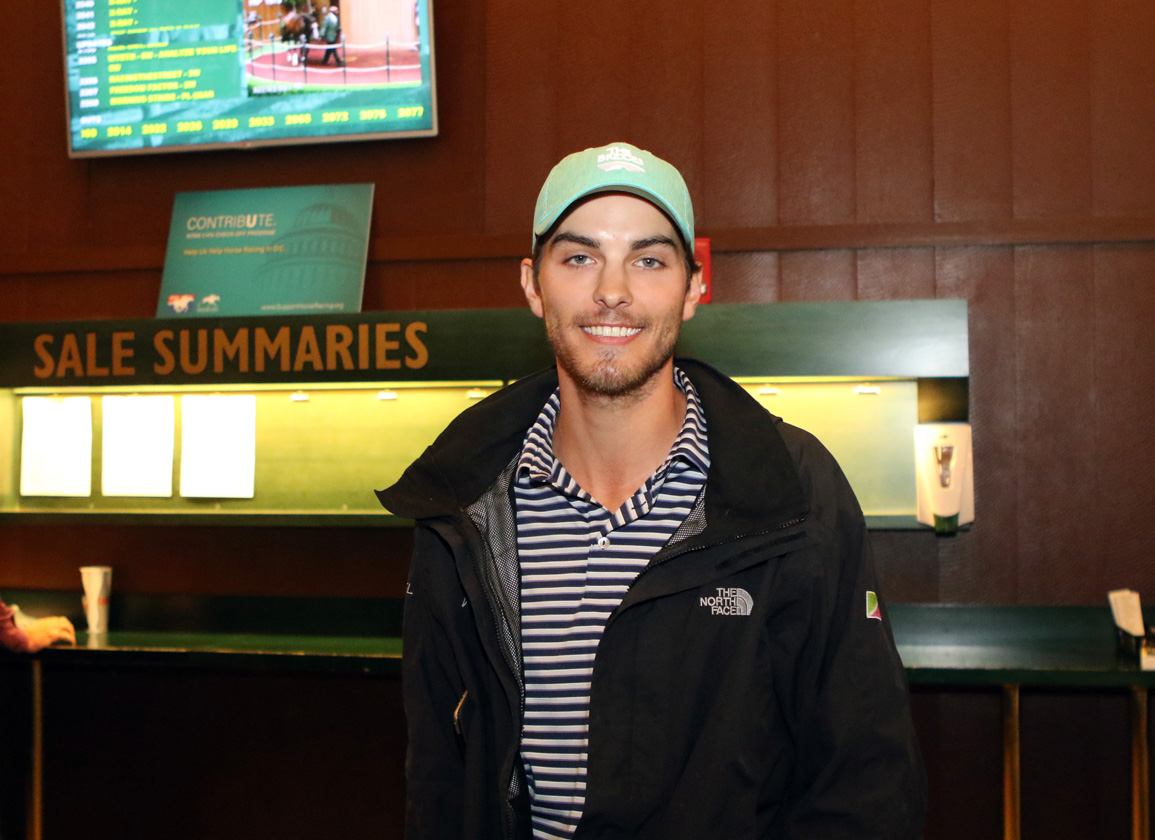 While Memorial Day weekend is thought of as the kick off to the beginning of summer, for Ryder Finney, it also serves as the unofficial start of sales prep season.

Early mornings of bringing in the yearlings, lengthy handwalking sessions under the hot summer sun and tedious hours monitoring the walker. All while analyzing every minute change in each yearling at Bluewater.

It's his favorite time of year.

“This time of year you see an unbelievable transformation in a lot of them,” Finney said. “Their winter hair falls off and they really start to mature and come into themselves. Watching them do that and helping bring them along is my favorite part of the process. It's constant vigilance and observation and if any little thing comes up you've got to be on top of it fast, but it's one of my favorite parts of the business.”

With rich family ties to racing, Finney has been invested in the sport for as long as he can remember.

“My mom [Meg Levy] runs Bluewater Sales, my dad was a bloodstock agent when I was younger and his dad, [longtime Fasig-Tipton President] John Finney, kind of built Fasig-Tipton Kentucky as we know it today,” Finney explained. “On the other side of my family with my stepdad Mike Levy, his family has been involved in the racing business through racetrack ownership, breeding, the whole thing. So I've been very spoiled and got to grow up around it every day.”

Finney didn't fully grasp his unique situation until his teenage and college years, when he left Lexington to attend Lawrenceville Prep School in New Jersey and the University of Pennsylvania.

“I would talk to my friends there whose families were not in the business and it would sort of blow their minds, just the whole concept of the horse industry,” he recalled. “They helped me realize just how cool it was, so I came home and I'm in it every day now.”

The 30-year-old now serves as the Bloodstock Specialist at Bluewater, playing a role in the day-to-day management on the farm while also advising clients with mating plans and at the sales.

One of his closest relationships is with Kirk and Debra Wycoff's Three Diamonds Farm. A longtime client of Bluewater, Kirk Wycoff sent his son Jordan down to Lexington for several summers years ago to work on the farm and learn the ropes of horsemanship. Similar in age, Finney and the younger Wycoff hit it off as they spent summers enjoying their two shared interests: horses and golf.

Finney's relationship with the Wycoff family continued to grow over the years and today, he helps Three Diamonds in a bit of each aspect of their business, from matings to pinhooks to layups.

“Kirk is really involved in the business at every level, which I think is tremendous,” Finney said. “He loves the game from top to bottom.”

Last spring, Wycoff owned a piece of a 2-year-old filly in the catalogue for the OBS Spring Sale. She was by Declaration of War, a stallion Three Diamonds was just starting to enjoying success with through their stakes winner Empire of War. They also had a juvenile colt by the same sire who would be named Fire at Will and later win that year's GI Breeders' Cup Juvenile Turf.

Wycoff wasn't sure if he was ready to part with this daughter of Tread (Arch), so he had Finney visit the Grassroots Training and Sales consignment at OBS and take a look at her.

“She checked every box physically and she worked outstanding,” Finney recalled. “We're always confident buying from Grassroots. Kirk has had horses with Dave and Jody for many years and we know how great a job they do, so he decided to buy her out and the rest is history from there.” 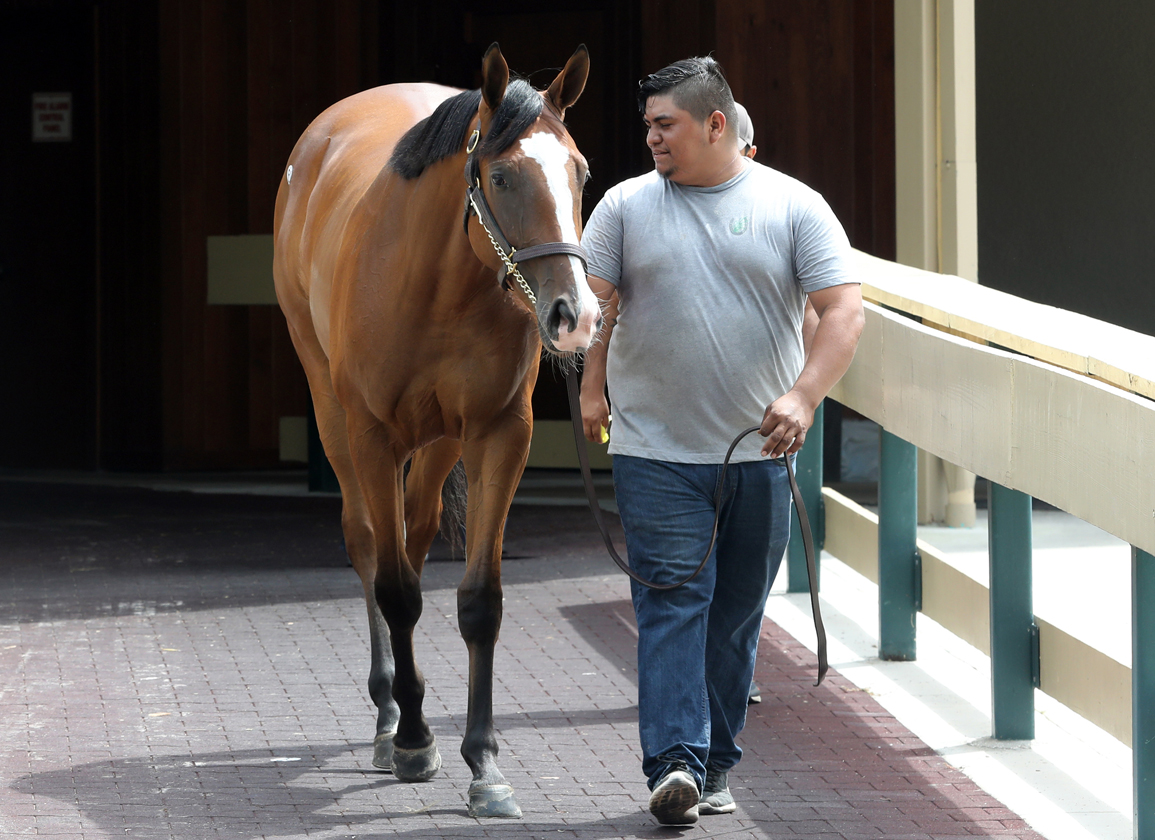 After Finney signed the $190,000 ticket, the bay filly was sent to Mike Maker and named Army Wife.

After three unsuccessful tries on the turf last year, she switched over to the main track and broke her maiden in October. When she came back in an allowance at Gulfstream in March, dueling to get the win by a nose, she had her connections' attention.

“Mike prefers to kind of race them into shape, so with the first race off the bench like that you don't always expect them to fire their 'A plus' shot,” Finney said. “Mike actually admitted before the race that he thought she was going to be a little bit short, conditioning-wise, so the fact that she gutted it out and won like she did really impressed me and kind of made me go, 'Huh, she might have some real talent.'”

Army Wife next finished third in the GIII Gazelle S. after getting into some trouble in the stretch, but Maker was undeterred and pointed her towards the GII Black-Eyed Susan S. at Pimlico.

With Joel Rosario aboard, the 9-2 choice came from off the pace to win by 2 3/4 lengths and earn her first graded victory on Preakness weekend.

After a quick vacation at Bluewater over the last few weeks, Army Wife is now heading back to Maker's barn to start her sophomore summer campaign.

“Kirk likes to let them be a horse for a second and kind of come back to themselves before they go back to the track, which I think is a very underrated concept,” Finney said. “Getting to eat grass and be a horse for a little while is totally rejuvenating for a lot of them. I think Mike is thinking the GI Alabama S. up at Saratoga. He loves the way she's responded to the increase in distance and thinks she'll get even better. Where she runs between now and then is up for debate, but I'm sure Kirk will have a plan. He always does.”

Army Wife has several traits that make Finney believe she has all the components to produce even more success.

“She's a very masculine filly, which I think carries over to her attitude at the racetrack,” he said. “As a 2-year-old she was a big, raw, forward filly. She's a good mover and has a very good mind, always very focused.”

Finney hesitates in saying that Army Wife is the most accomplished horse he's had a hand in, pointing out Grade II winner Instagrand (Into Mischief), a $190,000-turned-$1.2 million pinhook that he was a partner on. But there is one thing he will acknowledge. 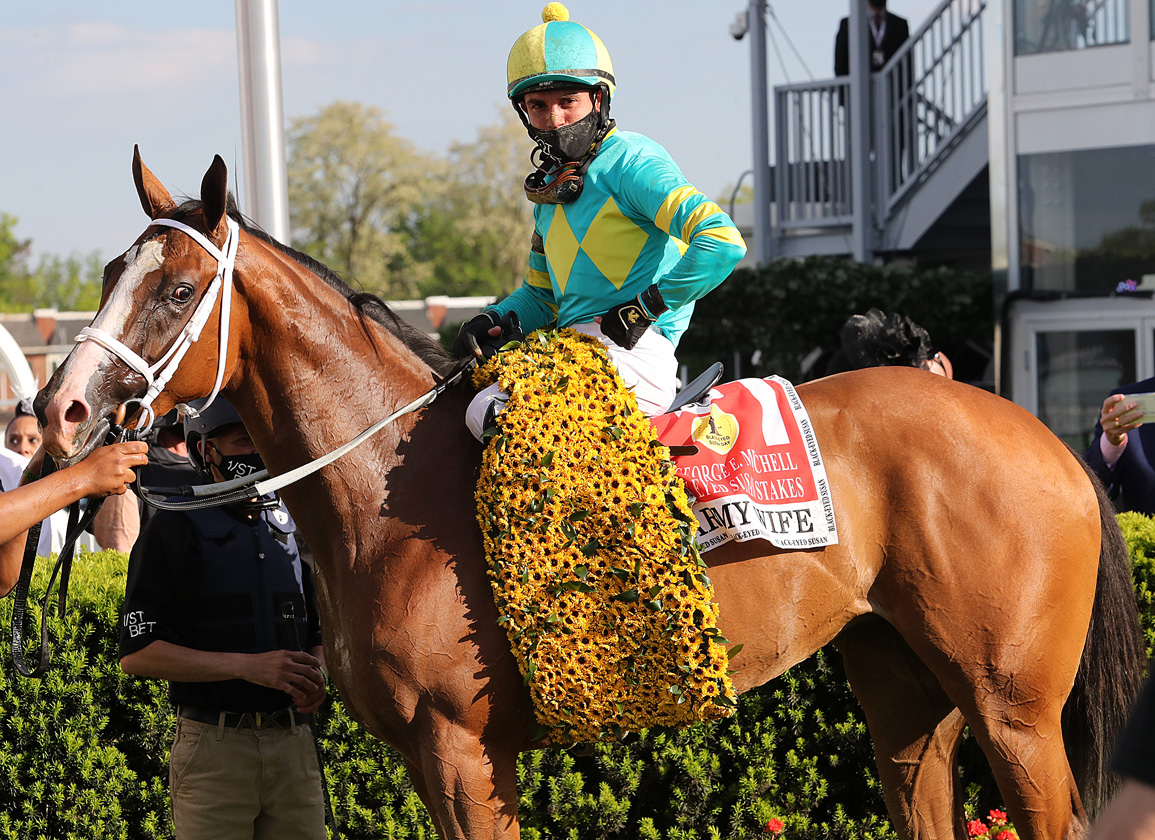 Army Wife gets her first graded win in the GII Black Eyed Susan at Pimlico. | MJC

“As far as a horse that has Ryder Finney written on the ticket, yes, this is the best one.”

When asked of his most favorite purchase he's ever made, Finney mentions the first horse he ever signed for- a filly named Turf War (War Front) that he purchased for Martin S. Schwartz for $425,000 at the 2017 Fasig-Tipton Select Sale.

“At the time she was kind of a small, round, plain bay,” he recalled. “But she was a very, very good mover, which is sort of what drew me to her. She had a ton of presence for a smaller filly and a really sharp eye. She was the first ticket I ever signed. With my family's history at Saratoga and my great grandad's [Humphrey S. Finney] name on the sales pavilion, I've been going there every summer since I was born, so it's a special place to me and it was special to get her bought there. It was sort of surreal.”

Turf War went on to win the Christiecat S. at Belmont in 2019.

“When she came to Kentucky, I was one of the first people to see her and she was just a special physical from day one,” Finney recalled of the future Grade I winner. “She handled everything with so much class and intelligence. I was in tears when she hit the wire in the Alcibiades. It was as emotional as I've ever been for a horse race. Because there were no fans at the time, you can hear me on the feed screaming as she was coming down to the wire. It was one of the best days of my life for sure. I was so proud of her.”

Finney is sure to have many more “best days” in racing if he continues picking out winners.

“The Easter egg hunt of a horse sale fascinates me,” he said. “You show up a sale, especially a place like Keeneland September where there are thousands of horses, and you know that only a few of them can really run. The challenge of combing through that massive quantity of horses and coming up with the right one is a really tough game, but it's so rewarding.”

While Finney aims to continue sharpening his eye as a buyer, he's equally passionate about his role as a seller and  continuing to build the Bluewater brand.

“It can be very nerve racking,” Finney said of the sales. “I, like my mom, sometimes get nervous and have to leave the barn and stop watching the horses get shown because if one maybe takes a little bad step I go, 'Oh my gosh, they're not going to like my horse because it took one bad step.' It can be a lot because there's so much time and effort, day in and day out, that goes into each animal and you want to see them do their best. You want to see them live up to their full potential.”